Mat Matters: Scorecards are in favor of Punk and UFC

Saturday night marked a major announcement in the world of mixed martial arts. Phil “CM Punk” Brooks officially announced his transition to the UFC after a more than one decade long run in professional wrestling.

Battle lines were drawn in the sand between MMA fans. Those who perhaps organically found MMA disdained the move, decrying Punk as a martial arts hobbyist who is taking the place in the pinnacle of MMA from more deserving “free agents.” Others were able to look through the tinted glasses of business in the world of sports entertainment, seeing the move as a chance to strong-arm other MMA promotions away from a star with name recognition and to garner more pay-per-view buys as the medium continues to slump for the UFC. 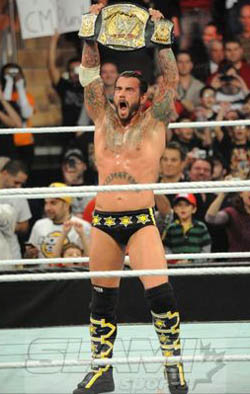 CM Punk with the WWE title after Survivor Series in 2011. Photo by Mike Mastrandrea

Regardless, the signing of Punk gained the UFC something they had long lost: interest. A survey of the situation sees risk and reward and pros and cons shared by the promotions and people involved in one of the biggest MMA acquisitions ever. The signing brings provokes some thoughts, namely what does each side have to gain and potentially lose in this equation. Just as in the world that Punk came from, there is truly no black and white; there are only different shades of gray that loom for the WWE, the UFC, and Punk himself.

Perhaps the most clear situation to decipher is the one of the WWE. Simply, the company lost and lost hard here. In a roster that is wearing thin according to WWE Chairman Vince McMahon himself, losing a popular anti-hero figure could not have come at a worse time. This is added to the fact that Punk made the company look terrible when discussing his departure and his alleged surprising success in the legal dealings between the company and himself. Perhaps the only win that can be chalked up to the WWE here is having Punk out of their hair for the time being. Otherwise, we could see the effects going forward for the company. Did the company lose rights to his likeness? Will the royalties for using his name put a dent in the checkbook? There are lots of things to look at for the WWE, but none of them look too positive.

The UFC’s bottom line in all of this seems to get high marks. In terms of potential pay-per-view buys and attention to the product, it looks to be the highest it has in some time. People were talking. Many MMA media claimed friends that hadn’t asked about the sport in some time were inquiring about the news. After a year that has seen stars fade away and people finally starting to drown in the oversaturation of the market the UFC has created, having a star that has already been created fall into their laps is just what the doctor ordered. Fans of Punk will be tuning in and those who decry the sister sport of MMA will be more than happy to pay to see the “fake wrestler” lose in real competition.

However, this could serve to alienate a lot of the fanbase the company has created and, considering the frequency of UFC events, there is a chance that the promotion has maxed out on making casual fans into regular viewers. Therefore, alienating the fanbase that is left by bringing in a pro wrestler could leave a sour taste in the mouths of many and cost them quite a bit, assuming their oversaturation has maxed out the number of eyes that will focus on the product. Not too dissimilar from the shrinking numbers the WWE Network was facing a few months ago due to unsubscribing customers, there is the potential that the UFC could end up just losing their base.

Additionally, fighters of Punk’s experience level are going to need to be signed to the promotion, according to UFC President Dana White himself. This means that the “Super Bowl of MMA” will now potentially be bringing in competitors with the barest of bare minimums in experience to provide a spotlight for Punk. While the company has been signing less than stellar competitors the past few years in order to put on more cards for TV and their Fight Pass (essentially the UFC equivalent to the WWE Network) service, this appears to be the straw that breaks the backs of a great amount of camels. Still, these situations are more hypothetical than the reality that many were left talking after Saturday night. The UFC now has an out-and-out star and a lightning rod that generates buzz. The rewards greatly outweigh the risks for a company that could be revitalized by the signing of CM Punk.

Finally, we get to the man of the hour himself. CM Punk is accomplishing his dream of testing himself in the UFC. Chances are he is going to get paid handsomely to have a few fights against competition that will be tailored to him in a sense. Win or lose, Punk has microphone skills that are light years ahead of anything MMA has to offer and the UFC would likely be willing to translate that into a gig as an analyst or hypeman after the fight game inevitably chews Punk up and spits him out. Punk has likely made himself a UFC lifer with this deal and he has made a dream come true. It doesn’t hurt that the dream will be padded by dollar bills, either.

The only negative that could follow Punk into this actually still has to do with the WWE. Punk cited transparent health policies and the vice grip that the WWE held over him while still labeling him as an independent contractor as two of the bigger reasons he left. Though the grass looks greener for him because of his star power, the UFC has been criticized for those very faults. Sponsors of fighters often place their logos and advertising on the shorts of fighters to benefit themselves and they compensate fighters accordingly. In earlier times, the UFC allowed anyone to slap their brand on a fighter. Then, the grip tightened as the UFC placed a sponsor fee that many companies could not pay. It grew tighter still as the UFC weeded out more sponsors by outright denying sponsors. Finally, as announced only a few weeks ago, Reebok became the official sponsor of the UFC. Offering tiered pay for fighters that are ranked in the official UFC rankings (which are criticized as arbitrary due to media members ranking the fighters) and those below, the UFC has a similar stranglehold on their independent contractors. On the health front, many athletic commissions are farcically inept at enforcing performance enhancing drug policies and placing them. The UFC themselves regulates drug testing outside of the United Stares when events are held internationally. Punk will likely be held to a higher standard when encountering these policies, not unlike some stars in the WWE, but the somewhat hypocritical reasoning in jumping ship to only potentially encounter these policies in a different medium puts a dark cloud over Punk in the eyes of the more informed sports entertainment fan.

As is normal in business, there are risks that come with rewards. The signing of CM Punk to the UFC is no exception. However, it is clear that the fight business made out like bandits while the WWE was dragged through the muck unceremoniously. While the gloves have not been put on and the punches have not been thrown in the cage, the business battle has already been fought and the handicap match yielded the expected results as the tag team of the UFC and CM Punk buried the WWE in definitive fashion.

And the winner by unanimous decision…