Mat Matters: How to fix the WWE

Even the most die-hard fan of the WWE knows full well the federation has been on a downswing for quite some time. There’s no sense of positive momentum. The ratings are lacklustre. The mediocre product has only shown glimpses of greatness over the last year. The WWE is floundering when it comes to the quality of their television and pay-per-view offerings.

As the old saying goes, if you aren’t part of the solution then you are part of the problem. With that in mind, here are some ways the WWE might begin to get back on track. 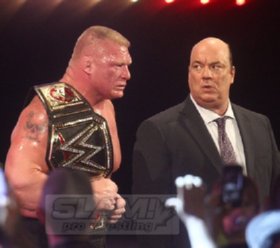 As Vince Russo said recently, the reason Raw did so well during the Attitude Era was because the production staff sought to make their next show just as good as their last. They were always trying to top themselves. Without any strong competition, the WWE has become bloated and lazy. It is evident in their storylines. It is evident in their production. This way of thinking has to change if anything is going to improve. Everyone from the top to the bottom has to start taking more pride in their work. The status quo should not be good enough.

Nothing and I mean nothing, pisses off fans more than to be continually teased. Paying noteworthy stars to make fleeting appearances turns people off. For example, there was much confusion and much frustration when after making such an epic appearance at the Survivor Series, Sting was not the focal point of Raw the day after.

What’s that clicking you are hearing? That’s people turning the channel once they realize The Stinger might not be working a regular schedule.

Using those part-time wrestlers as pushes for full-timers or as short-term pops to attract eyeballs, doesn’t do anything but add to the predictability of the product, discredits it and fuels the disappointment fans feel.

The WWE has even lost its way when it comes to basic, tried and true storytelling. Having a roster full of anti-heroes perplexes everyone. The bookers need to draw clear lines with the majority of the talent and the talent should act accordingly. For example: If you are a heel, antagonize the crowd if they are not generating the reaction they should. Turn on them. Berate them. Insult them. That’s your job. One wonders why the trademarks and calling cards of professional wrestling are being swept away and ignored in so many ways?

Fans need a reason to tune in. Having at least one championship defended each and every week could create interest and provides ready-made feuds. Follow in WCW’s footsteps and create a Television Title already.

In keeping with drawing more attention, it would be interesting to see Smackdown! mirror the hook of every reality show and that is their big endings every week. I know this sounds odd but hear me out.

Fans watch Survivor, The Amazing Race and other popular reality shows because someone gets eliminated, someone gets booted, someone loses each and every week. That randomness keeps them guessing and coming back for more.

The WWE has that formula too. Just look at the old school Survivor Series matches or the Royal Rumble. Even casual, lapsed wrestling fans order the Rumble every year because of one thing: unpredictability.

The WWE should use these hooks to their advantage to boost Smackdown! Maybe it is a tournament style broadcast every week. Maybe it is more gimmicks like Survivor Series or Royal Rumble matches. Whatever the case, there should be something of value at stake at the end of the broadcast.

Since the quality has dropped so significantly anyhow and they have become less of a showcase, it could be time to go back to the original PPV format. Royal Rumble, WrestleMania, Summerslam and Survivor Series with maybe a couple thrown in for good measure during the year, like bringing back King of the Ring.

Three hours is stretching things. Time to scale back.

Wrestling has lost much of its spark ever since tag team divisions became the desolate void for talent lazy bookers have no idea what to do with. At one time, a tag team match could headline any show, depending on the combatants because the division has just as much excitement and creativity as the singles division. It is time to invest and develop real tag team divisions again.

The WWE has taken strides in this regard but they need to push things even further.

At one time, managers meant so much to the industry. They were the catalysts for feuds, they certainly made matches far more interesting to watch and they added humour to the product. Like tag teams, there needs to be a resurgence, even at the cost of events or other talent.

Where the hell did they go? Watch the WWE of old and one thing is clear, wrestling was far more fun. The talent and the bookers didn’t always take themselves so seriously.

What happened to those moments? When did everything and everyone become so darn serious? NXT has given us some great moments with its carefree style but what about the rest of the WWE?

I thought any championship was supposed to be defended at least once a month or the title-holder was stripped of the belt? I thought wrestlers couldn’t book their own matches? That’s what a general manager or president is for. I thought stealing an opponent’s finishing move made it less powerful? I could go on and on.

While it is true that some traditions need to be put out to pasture like atomic drops, some things are there for a reason, to support the imaginative universe and give it rules, believability. Having Brock Lesnar not defend the WWE World Heavyweight Title for months flies in the face of everything veteran fans have known and like any industry that turns its back on the old hands, expect it to suffer badly.

Just ask any comic book company in the 1990s how they fared. There are many reasons why Marvel Comics filed for Chapter 11 bankruptcy protection in 1996. Dismissing veteran fans is one of them. It took years for Marvel to recover, get back to basics so they could entice long-time readers back after changing and re-imagining everything under the sun.

Like any sports team, like any company, the WWE needs to be constantly developing new talent, pushing that talent and not resting on their laurels. There are many in NXT who are at the stage where with the right push could become bigger stars on Raw or Smackdown.

There are also many underutilized stars. Why not make Titus O’Neil into a monster face? He has all the right skills. Why not push down or rework fading or stale stars like AJ Lee, Heath Slater, Jack Swagger, R-Truth, Zach Ryder, Adam Rose and others until they can repurposed or reignited in some way? Why not work to improve them? It worked for Stardust. It worked for Bray Wyatt. It can for others too. Like the pit crew for a world class racer, the WWE bookers and managers should be working with their talent to constantly improve things and most importantly, listen to their ideas and advice.