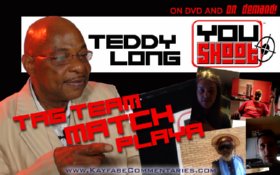 Theodore “Teddy” Long is a jack of all trades. During his near two decade experience in the world of professional wrestling, Long has been a manager, an authority figure, a referee, and even a ring crew member. All of this experience lends stories and insight that make YouShoot: Teddy Long from Kayfabe Commentaries an interesting watch.

Throughout the interview, Long details some of the intricacies of the various hats he wore throughout his career and gives a small peek behind the curtain. One thing that should be immediately noted is that this is not a work that contains a lot of juicy gossip and confirmation of rumors. Long is not the mudslinging type, though he does have a few surprising nuggets up his sleeve. Though that is often the meat that makes shoot interviews interesting in the eyes of many, there isn’t much of that here.

Long has a few surprises in store for viewers of this interview. For one, Long manages to shed a little bit of light on one of the most underrated parts of pro wrestling — the referee. Long gives a glance at the eyes through the man in stripes, but he doesn’t stop there. Long also covers some of the performance aspects he encountered in storylines and backstage segments as the longtime WWE SmackDown General Manager, as well as his proclivity for the tag team match. Additionally, the peeks backstage and Long’s surprisingly raunchy storytelling are good for a laugh (maybe a cringe for some) or two. Long’s tales of encountering racism from some of the bigger names of yesteryear are worth the price alone.

Some of the segments featured in the work include Long giving a Joan Rivers-like critique of wrestler styles throughout the years and a ranking of wrestlers that were the most popular with the ladies, for lack of a better phrase. The first is entertaining, considering Long’s stylish suits throughout his WWE tenure. The second, though a bit cliched, provides some funny bedroom stories about some names you’d expect and some you wouldn’t.

The biggest criticism of the work is that it isn’t something of major substance. It isn’t going to break any new ground or give you a brand new view you have never seen before. In that sense, it is wholly miss-able. Still, there are enough nuggets here and a storytelling style that makes the time go by easy with the interview. If you run across it, take some time to find those interesting tidbits. They’ll be worth time.

You can believe that, playa.