After six months of searching, I’d assembled a very colourful roster of wrestlers willing to do the series. In the interim, I’d learned to respect their boundaries and navigate their sensitivities, especially about what was and wasn’t real. An unspoken understanding had emerged — we know you think you know and ask all you want but it may come at a cost. 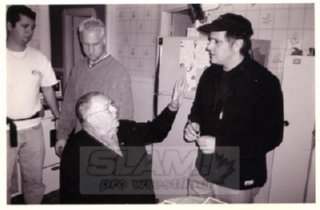 John Dolin, right, works it out with Glen Parks.

During production, at his small apartment in Trois-Rivières, Quebec, former referee Glen Parks, then in his 80s and somewhat fragile, enthusiastically described how the Dog had started a brawl in the early ’60s, at a local diner, with his opponent Walter Babin, shortly after coming to town in advance of their match which Parks later refereed. Le Colisée sold out that night, with 4,500 people screaming for the Dog’s head.

“Why hadn’t Maurice Vachon been arrested that afternoon?”

“No idea,” said Glen. “But the police had to break up the melee, it was the Dog’s fault.”

Glen shrugged, and then, betrayed by his age, he blurted out that Jack Dupan, the local promoter, also owned the diner. “He’d be the one to ask.”

“Do you think that had anything to do with charges not being laid?”

“What about the role of the referee in a match?”

“Don’t make me say it,” Glen replied, literally buttoning his lip while whispering KayFabe which he pronounced Kay Fi. He’d invoked the wrestlers’ code of silence. And that he protected something I’d so fervently defended as a kid was just plain old-fashioned heart-warming.

Glen was J.M. Barrie in a cardigan. At one point, he proudly recalled how The Dog had spit on his daughter at the match, as if he’d doused her in holy water. Then he remembered his role: The Dog was vile, there was unfinished business, he’d never forgive him … and I doubt this born and bred Quebecer could have shown more affection or reverence for the man between takes.

MAD DOG: Once I get going it’s hard for me to stop — someone provokes me, and they say, “I’m not very big,” I say jump on me and watch me GROW. When I get riled up, I become the Mad Dog that I really am. 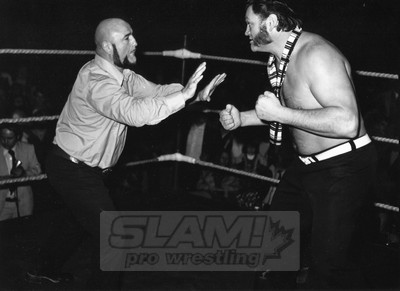 The Dog and Don Leo Jonathan begin to battle. Photo by Tony Lanza

During casting, the networks I’d been speaking with remained leery. Some carried WWF programming and were worried about their cash-cow getting slagged, directly or indirectly. That wasn’t my interest but it didn’t matter. Then I heard back from The Comedy Network, which was a long shot since they didn’t produce docs or the hybrid like the one I was proposing. By chance an exec named Brad Birch worked in development. Brad was my age and also a fellow fan as a kid and instantly got behind the project. Within a few weeks I’d have my answer. And that answer was this — “We’ll do a one-hour special as a test for a series.”

We agreed to make Mad Dog the focus. He was a Canadian icon, known in every region and was wildly funny, at least according to Paul Vachon.

“He’s very spontaneous” were his exact words, the implication being trust me Dolin, if you want funny, you will get way more than you bargained for.

I assured The Comedy Network we’d keep it light and that the Dog could deliver, with Butcher riding shotgun as co-host. I was a little nervous though; Mad Dog was 71, I had yet to meet him and I honestly didn’t know if he still had it.

MAD DOG:Yeah when I was about 10 years old, me and my brothers and my friends walked to my Aunt Gertrude’s in Verdun. We walked two, three miles, we’re thirsty, we wanted a pop ice cream or a quarter — all my uncles (and aunts) were nice but not this one. Aunt Gertrude says, “What do you want? WHAT DO YOU WANT?” We came to visit.

BUTCHER:We came to visit. Nothing. (No response.)

MAD DOG:We came to visit, nothing. So we turn around and walk home, another two, three miles in July, it’s 90 degrees outside. Later on when I start to wrestle on TV, at the Montreal Forum, on CBC Radio Canada, she says, “Oh Maurice, (in French) Why don’t you come and see me? My neighbours they see you on TV, they want to meet you.” Yeah, we’re going to come and see you — I never went back to this day to see her. Aunt Gertrude.

MAD DOG: I don’t know, but all she needed was a broom.

BUTCHER:I remember Aunt Gertrude. She was real old a long time ago.

MAD DOG:She was old when she was young. Maybe she’s (still) in the house, I don’t want to see her for sure. 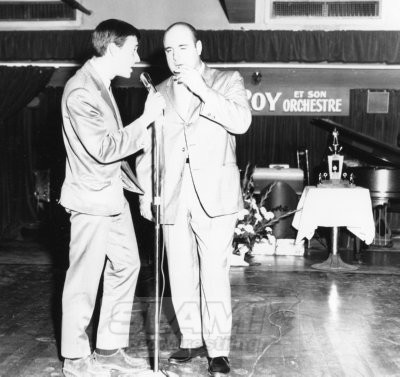 Maurice Vachon ponders a question at a Montreal nightclub.

Butcher was right about the Dog’s comic gifts, of course. No matter how far back on his timeline we went, there was always an anecdote that was unintentionally or potentially funny and it usually pointed toward the Dog’s combustible nature. Thankfully, the Dog could laugh at himself, usually harder than anyone. In fact, looking back, he was often amazed by his own behaviour: the riots he caused, the bar fights he finished, the eyes he claimed to pop out from their sockets while finishing them, the brawls he got into as a kid — it was so extreme you either laughed or fled. And that he revelled in it all made it completely outrageous. The Dog was the real deal; the persona and person were closely aligned.

BUTCHER: The flashpoint here was when Mad Dog got into wrestling. One time I found an old apple barrel at the Dump at the Champs-Des-Fous and I was rolling it home and one of the English kids shot at me with a BB gun and it hit me. I had short pants — and he hit me in the leg — so when Mad Dog came home from school I told him about it. He went over there, dragged him out of the house, and beat the hell out of him and the next day when his old man came to complain Mad Dog beat the hell out of him too. My father said that’s it! From now on you’re going to do it for a living, we’re going to take you to the YMCA. 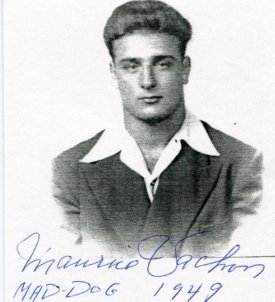 Maurice as a young man.

The Dog was a handful as a pup. If memory serves me correctly, he started wrestling when he was 13, making little brother Butcher, seven at the time. With 13 kids in the family, there was plenty of horseplay and fighting at the Vachon home as you’d expect. Perhaps the Dog honed his legendary fighting skills at the dinner table which Butcher said got pretty crazy around feeding times. He also said the Dog had a thing for breaking chairs, which makes me wonder what the hell they sat on at the dinner table.

At any rate, the Dog hit the YMCA where he was introduced to Frank Sexton, a one-time Olympic wrestling coach. While Sexton taught him to wrestle, Maurice also increased his training at home, developing his strength by following a Charles Atlas course which his father had sent away for.

BUTCHER: Well, getting started into wrestling meant that Mad Dog had to get strong, so my father sent away for the Charles Atlas 97 pound weakling exercise course and that’s what he did. If I remember right my father used to read it because it was in English and Mad Dog and I couldn’t read it. It stressed dynamic tension … that’s what it did. Dynamic tension, it works too.

MAD DOG: Later on, I used to put Paul on my shoulders because he was much smaller than he is now and much younger and I’d run two, three miles, and he used to hate it, and I’d do push-ups and I’d put him on my shoulders, do the wrestler’s bridge, put him on my chest, do that for hours and hours. He wanted to play, I wanted to exercise to become a wrestling champion.

GENE KINISKI: (At an amateur tournament) Vachon and I wrestled in ’47 in Athabasca, Alberta. And I have to say this about the Mad Dog, he truly was a Mad Dog. Once he stepped into the ring the only thing that mattered to him was victory. When you encountered Vachon, it was like encountering Mount Vesuvius erupting — once he started to spew you just couldn’t stop him you were covered in Molten Vachon. It was a foregone conclusion he would go to any lengths to win. I don’t think he had in his vocabulary he had the word loss — he was always a winner and today he’s still a winner. I think he’s a great, great asset to amateur and professional wrestling. And being a fellow Canadian I’m very, very happy he’s one too even though he was born in the province of Quebec.