Remembering a Where Are They Now? article published by the Toronto Star in 1983 which I’d pinned over my desk at university, I called every Farhat in Michigan where it claimed he’d lived at one point. The wrong Eddie Farhat, evidently tired of fielding calls like mine, hurled a string of obscenities at me before hanging up. Had I been him, I would have rolled my eyes to the heavens and strung callers along with gibberish until they died of old age. 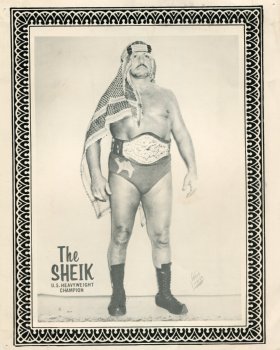 Before long, I was speaking with Joyce Farhat, The Sheik’s wife and one-time ring valet. She sounded rough around the edges but was friendly enough. On The Sheik’s behalf, she said it was unlikely he’d do a biography series; he’d never spoken in English on camera and she doubted he would at this stage of his life. 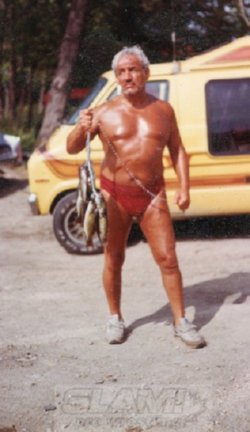 The Sheik between gigs.

I said I’d be more than happy to do his interviews in gibberish while she sat beside him and translated, as Princess Salima, in her mysterious veils and vest. My head almost popped off my shoulders I got so excited by the prospect. Not to diminish the hardship these people went through but if Joyce agreed, the series could be absurd, informative and very funny, just by virtue of the fact it would feature eccentric seniors looking back on dubious accomplishments that had been carny-strange to begin with and were likely now all twisted up in ego and selective memory.

I could hear The Sheik’s laboured breathing on the other line. The Original Sheik, a misunderstood Syrian royal who used a pencil to carve his displacement into the foreheads of his opponents, who tossed fire, who really was American, who liked to fish, who mysteriously ruled Maple Leaf Gardens, who I saw headline against Sweet Daddy Siki, Bobo Brazil, Pampero Firpo and Johnny Valentine, in main events that may have lasted all of two minutes, was listening in. 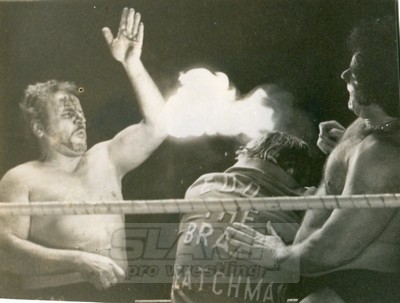 “We’ll think about it,” were where things were left off.

The long and short of it was, after several calls, much lobbying and never a firm commitment, Joyce eventually suggested I contact Maurice Vachon; she remembered he liked being on camera.

I tracked him down in Nebraska. His voice was instantly recognizable as was his distrust. It had only been six years since McMahon exposed the sport, and wrestlers from the Dog’s era had lived by KayFabe for most of their lives, and were not quite ready to open up.

No surprise Maurice was quick to deflect. “Talk to my brother Paul. Here’s his number.” Click.

Not an encouraging start. I barely had time to savour that crazy-assed growl. 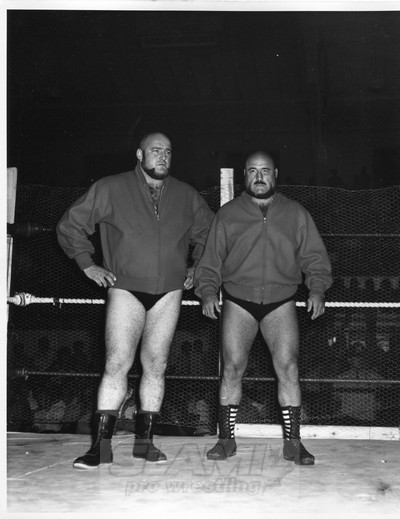 Mad Dog and Butcher in a cage. Photo by Tony Lanza

I called Paul “The Butcher” Vachon and got an entirely different reception; Paul wanted to tell his brother’s story. It was magical. He is magical. Wrestling is magical. I’ll talk, you listen, off we went.

If you’ve never had the pleasure of spending time with The Butcher, picture a lumberjack historian, inveterate storyteller, itinerant minstrel, beat-hippie grand-dad combo and easily the kindest man you’ll ever meet. 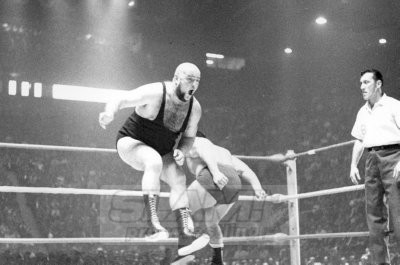 The Butcher in action. Photo by Tony Lanza

Paul knew the history of the territories, he hung out with Jerry Lee Lewis in Atlanta, the Dog would shoot with Boom Boom Geoffrion just for kicks, they pulled pranks on Gump Worsley who hated flying — the people he’d met and the road stories he lived were amazing, plus Joyce had boasted she and The Sheik knew Don Rickles. Wrestling with the Past was going to be funny and have heart, I had a target.

I committed to avoiding the underbelly and focus on the wild and woolly.

Paul got the Dog to commit. With the Vachons aboard, I took a shotgun approach in finding the balance of the cast. More craziness was coming.

MAD DOG: Well, Boom Boom Geoffrion, sometime he’d wrestle with me, he thought he could beat me. One time in particular, in Gramby, Quebec, he had a nice physique you know — and he tried to wrestle with me, and I’d get behind him and dump him on his head, half knock him out, and then I showed him who was the boss. In the hockey rink maybe could beat me, in the squared circle that’s a different story. He was a nice man.