Steadily climbing her way to the top: Oh, really? O’Reilly!

Just like fans of The Rocky Horror Picture Show, SHIMMER fans have their own set of prepared responses to call out when they hear the appropriate cue.

When Stevie Nicks’ “Edge of Seventeen” starts, the fans substitute “Boo-Boo-Boo” for Nicks’ “Whoo-Whoo-Whoo” to serenade Portia Perez, who comes to the ring accompanied by that song. 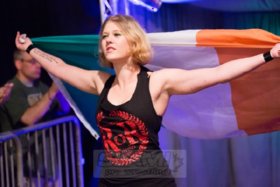 Rhia O’Reilly is proud of her Irish heritage. Photos by Ricky Havlik, RickyHavlik.com

When Nikki Storm invariably critiques the ring announcer’s pronunciation of her hometown, the fans correct the gaffe and shout out their phonetic interpretation: “GLAS-gō, SCOTLAND!”

And if someone happens to say the words “Or, really?” … you can be damn sure you’re going to hear every fan in the Berwyn Eagles Club respond with “O’Reilly!”

The O’Reilly in question is Rhia O’Reilly, a feisty Belfast-born grappler who has quickly become a fixture in SHIMMER, since debuting in SPARKLE (the SHIMMER pre-show) in November 2011. Appropriately enough, she had her first match as part of the main roster (a loss to Courtney Rush) on St. Patrick’s Day 2012.

O’Reilly has hit her stride as a heel and has formed an alliance with former SHIMMER champion (and the mother of WWE Diva Paige) Saraya Knight, one of her mentors from the United Kingdom.

When she was a young girl, O’Reilly discovered wrestling and found her calling.

“I started watching wrestling when I was about 12. I went ’round to a friend’s house and she watched it. From the first time I saw it, I was hooked,” O’Reilly said. “I loved watching women like Ivory and Jacqueline, but it was when Trish Stratus, Lita, Molly Holly, and Victoria got on the scene that I really decided I wanted to wrestle.”

O’Reilly moved from Northern Ireland to England for school. She decided to remain in London because it afforded her more opportunities to pursue her dream of wrestling. But first, she traveled overseas to Calgary to train at the Storm Wrestling Academy under Lance Storm.

“It was an unforgettable experience,” she said. “Training was tough but I never wanted to give up, though a lot of others dropped out before the end. When I returned to England, I wanted to learn more of the British style and trained with Justin Richards and the Knight family. I still currently train at the Progress Wrestling School in London.” 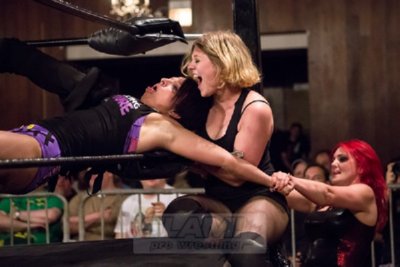 Rhia O’Reilly and Saraya Knight work together to hurt.

O’Reilly made her pro debut in 2009, and she has paid her dues on both sides of the Atlantic. In SHIMMER, she climbed the ranks by virtue of a series of gutsy performances against Davina Rose (now known as Bayley in NXT), Cheerleader Melissa (suffering a ghastly black eye in the process), Santana Garrett (Brittany) in TNA, and MsChif. She earned spots in SHINE, NCW Femmes Fatales in Montreal, and Anarchy Championship Wrestling in Texas, and captured the Bellatrix British championship in England. Her confidence and ring presence have improved remarkably over the past few years, and she has developed into a character the fans love to hate.

O’Reilly says that her success in SHIMMER has been “a dream come true.”

“Not long after I started training, I had my heart set on wrestling at SHIMMER, and everything I did after that point was to work towards that goal,” she said. “Making my debut on St. Patrick’s Day couldn’t have been more perfect, and every time I have been able to come back has been a privilege. I’ve been able to work with so many amazing wrestlers, and I am constantly trying to make every outing there better than the last.”

On October 31, O’Reilly participated in a fundraiser for a cause near to her heart. She climbed London’s iconic BT Tower — all 842 stairs — to help raise money for Action on Hearing Loss, an organization dedicated to raising awareness of hearing loss and deafness research. The organization offers services and products to assist the deaf and hard of hearing. 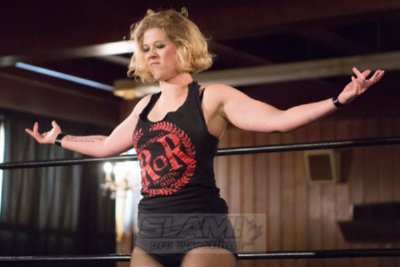 Rhia O’Reilly does not lack for confidence.

“I have tinnitus and probably will have it for the rest of my life,” O’Reilly said. “Among other projects, Action on Hearing Loss does work with DJs, musicians, and lovers of live music to make young people aware of the damage they could do to their hearing that could affect their whole lives.”

Though she has been able to go toe-to-toe with some of the best female athletes on the independent circuit, O’Reilly said BT Tower proved to be a bit of a challenge.

“The first 500 steps weren’t too bad, but then the burn really kicked in,” she said. “But it was worth it to raise money for charity and see the wonderful view of London from the top.”

Action on Hearing Loss is continuing to collect donations in O’Reilly’s name. To make a donation, please visit https://mydonate.bt.com/fundraisers/rhiaoreilly.