Vancouver Island is known for a lot of things: peacocks in Beacon Hill Park, music festivals and farmers markets, the goats on the roof at the Coombs Country Market, the wharf in front of the B.C. legislature, whale watching, numerous vineyards, and the natural beauty of the island itself. Now Cremator Von Slasher wants it to be known (again) for pro wrestling.

Von Slasher, who is actually Cody Washington, his real life girlfriend Riea Von Slasher, BJ Laredo, and several other local wrestlers pulled together in 2013 to form Vancouver Island Pro Wrestling (VIPW) in order to kickstart a wrestling tradition that goes back quite a ways. 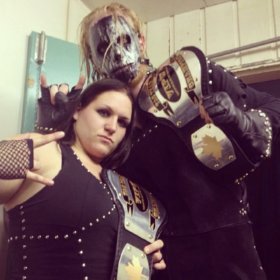 “There’s been pro wrestling on the island for years dating back to the days of Gene Kiniski, Killer Kowalski and Whipper Watson,” Washington told SLAM Wrestling. “Stampede Wrestling used to make regular trips to Vancouver Island and so did the WWF/WWE; Andre The Giant wrestled here. I saw my first wrestling show at the old Victoria Memorial Arena back in October of 1995. It was a WWF event. The amount of shows held on the island has fluctuated over the years. Sometimes there would be close to a show a year while others might only have one a year … sometimes none.”

For those unfamiliar with Vancouver Island it is located on Canada’s southern west coast. The capital of the province, Victoria, is located on the island along with several other cities, towns and communities such as Nanaimo, Port Alberni, Parksville, Courtney, Saanich, North Saanich, and Campbell River. The population on Vancouver Island as of 2011 is just short of 760,000. The island is a major tourist destination and during the summer months massive cruise ships are regularly seen. It also boasts a fair sized IT and technology, logging and fishery industries. As well, Vancouver Island has become a desired location for retirement communities due to its beauty, weather, and tranquility. There are several retirement communities located in Victoria, Saanich, Langford, Sidney, Nanaimo, Parksville and various other places.

There are a number of reasons why there hasn’t been regular wrestling shows on Vancouver Island prior to VIPW, but probably the primary one is because the major mode of transportation for getting there is the B.C. Ferry, which can get pricey once vehicles are factored in, a deterrent for promoters bringing in wrestlers from the mainland.

“I personally always wanted to own and operate my own company and a lot of the other island wrestlers had the same goal,” said Washington. “Usually when one of the mainland wrestling companies came here, they’d hire a local to do the leg work for the show — posters, promoting, etcetera — and then they would come put on the show. We — the islander — found ourselves doing most of the work for these shows, so when the mainland companies stopped coming over here, we started forming the ball so to speak. After a while all we needed was to get said ball rolling. That credit goes to BJ Laredo who booked our first venues, but I’m sure he’ll agree that it’s taken an entire crew to keep it rolling. On September 20, 2013, we had our first show in Port Alberni, and we continue to run to this day. I credit myself, Riea Von Slasher, BC Laredo and the rest of the crew for the success of VIPW.”

One of those who has been with VIPW since its early days is Eddie Osbourne — who recently journeyed home to Campbell River, British Columbia after years in Ontario.

“I have enjoyed wrestling for VIPW and I was honoured to be in the first match,” reminisced Osbourne. “The locker room is top notch full of good guys. It’s been cool to see a guy like Krofton who is the league’s rookie, become beloved by the fans. Being ‘new’ to the west coast I have got to wrestle several wrestlers I have never got to before. So it has been nice to be kept on my toes and work with different talents. I team with the former Champion Scott Steel now, but I also had several matches against him before we became a team and he was one of my favorite opponents so far. VIPW is a year old and had great success. I look forward to getting in the ring with some of the core roster I haven’t yet got to wrestle.”

Still, despite that success, Washington, admitted that there have been challenges along the way including flat tires on the ring trailer, talent missing the ferry or cancelling at the last moment, and other issues.

“One show, I was so sick with the flu I couldn’t wrestle or even help run the show,” Washington recalled. “Thankfully Riea and BJ took care of everything. We really haven’t had a problem getting wrestlers to come here, in fact we’ve had more trouble finding spots for every one that wants to come work for us. The biggest problem is getting talent to come back month after month so we can develop storylines and angles. It’s hard as most have real jobs, family and other bookings. Right now there are roughly six companies in British Columbia so sometimes there’s a fight for dates, talent and venues.”

That fight for dates and talent even led to VIPW and another company having competing shows booked on the same night on Vancouver Island.

“We ran a show in Duncan in March of this year, the same show I was too sick to work, and another company ran on the same day in Victoria which is a little over an hour drive from Duncan,” explained Washington. “We had the date booked first, but they still chose to run on that day; I wasn’t happy about it at all. From what I heard our show did better than theirs, but I believe both shows were hurt. If the shows were on different dates I believe both companies would have had better draws. I noticed fans from Victoria at our show in Duncan that night so who knows. Since then we haven’t had any problems with any of the other companies; in fact we’ve helped with other companies’ shows on the island.” 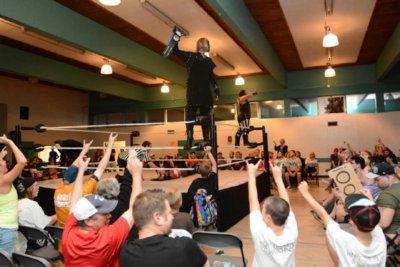 The crowd appreciates the VIPW action.

One of the things that has made Washington the proudest is anytime that VIPW has packed a venue or gotten a positive review the day after a show. “After our shows in September, I was walking through a mall and saw people wearing VIPW shirts; it’s just so hard to believe what we’ve done in one year and the impact we’ve made,” reflected Washington.

One wrestler who echoed those reviews has been Kenny Lush. “They’re great to work for,” elucidated Lush. “The island crowds are great and getting bigger every show. It’s easily the most fun company to work for. A lot of the island guys are green, but willing to listen and very eager to learn from the more experienced guys. Working with Sid Sylum and Tony Baroni were good times. I did a no disqualification match against Lak Sidartha in Duncan which was rad.”

A unique element that Washington has started to integrate into VIPW shows is to utilize the rich and diverse musical talent found on Vancouver Island. “We had local rap artist SirReal perform at our September 20th show in Nanaimo, he even got involved in the action; we’re looking at working with more local artists in the future.” 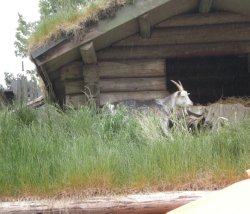 The Goats on the Roof at the Coombs Country Market — just because we can. Photo by Matthew Byer

As to the future, while Washington acknowledged that VIPW hadn’t really thought about seeing if one of the numerous cruise lines that visit Vancouver Island might be interested in bringing their passengers to see a show he felt it was definitely something they should look into in the next year or so.

“We’re looking at doing more shows at local fairs and festivals. We’re also looking to establish more regular venues and visiting new towns we’ve never been to. We hope to bring a few stars and legends to the island.”

Matthew has many warm memories from when he lived in Victoria, from February 2012 to March 2013. He misses being able to go have fish and chips and fish tacones at Red Fish Blue Fish along the wharf.