Welcome to the unique world of Natalya Neidhart, where one minute you’re dancing with a seven-foot-plus Punjabi giant and the next you’re getting married on cable television, and you wouldn’t want it any other way.

“I believe in whatever you’re given, you can make it gold,” the former WWE Diva’s Champion told SLAM! Wrestling. 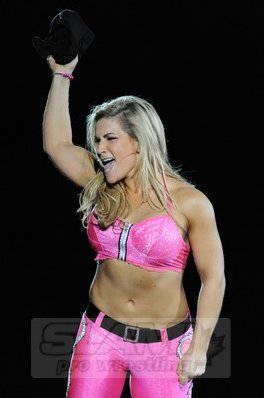 Natalya at a WWE house show in Toronto in July 2014. Photo by Mike Mastrandrea

This includes some segments that others may have refused, namely time spent in a unique trio when the Calgary-born Diva accompanied The Great Khali and Hornswoggle to ringside for their matches.

“I loved working with Khali and Hornswoggle!” she said with pure emotion. “People go up to me and say, ‘Gosh Nattie, that was goofy and you’re a wrestler.’ Well guess what? I absolutely adore The Great Khali in real life and Hornswoggle is one of my good friends. It was fun! Who gets to dance with a 7’2″ giant, especially one who can’t dance? I almost had Khali accidentally fall on me, [and] clothesline me on live television!”

In fans’ eyes, however, this still pales in comparison to one particular run Nattie had. Yep, the infamous farting angle. And yet, when the former Diva’s champ talks about it, it’s just another opportunity for her to do something unique.

Nattie certainly doesn’t need to look far for inspiration for some of these moments.

“I think the McMahons really embraced that,” she explained. “Look at Stephanie — she’s the biggest character in WWE. She’s just captivating, whether she’s getting thrown into a pool of mud with Vickie Guerrero or being arrested.”

In a different stream comes Total Divas. Now in its third season, Nattie remains one of the most integral personalities on the show (alongside her husband T.J. Wilson / Tyson Kidd) and the response she receives validates everything she has done, including some of the most trying, personal moments the E! show has seen.

“I believe that on Total Divas because there, life just happens,” she says. “I’m relatable on Total Divas because at first I was, ‘I don’t know if I can show this,’ or, ‘I don’t know if I can say that.’ When my cat was dying, my first instinct was that we can’t do this, but then I realized that people want to see every array of emotion. They want to see you happy, sad, vulnerable, scared, insecure… that’s just being a human. That’s what I love about Total Divas — I can show that range of emotions, the deep connection I have with TJ, my family and friends, all these things that people can connect with.”