Brother, the Hulkster’s back in Montreal!

Hulk Hogan and Montreal have a love story that started almost 35 years ago and peaked in 2002 when the fans gave him a huge standing ovation. This weekend he’s back for the Montreal Comic Con and talked about some of his highlights in town. 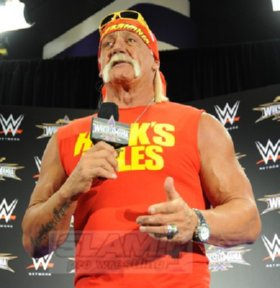 Hulk Hogan at the press conference before WrestleMania 30 in New Orleans. Photo by Mike Mastrandrea.

August of 1980. For many sports fans it meant the closing of the controversial Moscow Olympic Games, boycotted by many countries, including the United States and Canada. But for wrestling fans, that month meant a memorable show in New York City.

Dubbed “Showdown at Shea”, the event attracted more than 35,000 fans to the Mets’ stadium to see the main event between Bruno Sammartino and Larry Zbyszko. Third from the top was a match between worldwide attraction Andre the Giant and a then-heel Hulk Hogan. A week later, the rematch was held in Montreal for the newly formed Varoussac Promotions, owned by Gino Brito, Frank Valois and Andre Roussimoff himself.

The match drew the group’s first sell-out at Paul-Sauve Arena. Of course, these two matches weren’t the most famous between the two, as they would wrestle seven years later in a jam-packed Pontiac Silverdome for WrestleMania III.

But Hogan has just as fond memories of the early bouts as the big ones.

“I remember Jean Ferre — Andre the Giant — being very young and fast. Just very good memories of the old Paul-Sauve,” Hogan told SLAM! Wrestling. “In 1980 Andre was faster, very healthy and very aggressive. Seven years later he had gained a lot of weight, he had some back problems, some back issues. He was a different person in the ring, he was not as fast, he was a lot bigger, he felt a lot stronger at Wrestlemania III. So the difference was speed compared to him being stronger in the later days because, I think, of his size. He was way overweight, though.”

In the build-up for the match, the promoters sent Hogan on a crusade against other Frenchmen. Gino Brito, Jackie Wiecz and, believe it or not, the legendary Edouard Carpentier, all lost to him.

“I remember how nice of a person Carpentier was. Very kind, very nice guy. It was a great great honour to wrestle him,” remembered the former six-time WWE champion.

At about the same time, Hogan was also working in Minneapolis and he met a young man from Quebec City with whom he became very good friend, Rick Martel. The story doesn’t say if Martel helped Hogan wrestling-wise, but he sure did help him in some other ways.

“I met Rick when I lived in Minnesota and he was great. I was wrestling for Verne Gagne and the AWA and at the time I was not married, I was a single guy. So Rick Martel came in and we’ve became friends instantly. I told him I had a two-bedroom apartment and if he wanted he could hang out with me. It was the smartest move I’ve ever did! Because Rick Martel was so good-looking, we would go out to the bars and all the beautiful ladies would come to Rick and I would be there to get some of the girls Rick would attract. So it was a very good business move. I was the wing man, which was okay” laughed Hogan.

Fast forward to April 1997, and Hogan had one of the last great non-WWE main events in Montreal.

Not agreeing with Vince McMahon about doing a huge show at the Olympic Stadium, Jacques Rougeau Jr. unretired and signed with WCW, alongside tag team partner Pierre-Carl Ouellet. In April of 1997, they — and not WCW — co-promoted a show where Rougeau was going to wrestle Hogan in the main event. If this is not a news story itself, the fact that Rougeau beat Hogan 1-2-3 in the middle of the ring when the latter was WCW World champion and the leader of the nWo certainly is. Many rumours have it that Rougeau had paid Hogan to lose, but the truth of the matter is that it was Hogan’s idea.

“It was business and it was the right thing to do,” he said. “Jacques was working very very hard for wrestling in Montreal. And on top of that, Jacques is a great man, a good wrestler and I know he would’ve done the same thing for me. Me and him had a little bit of an argument about it because he disagreed with me [about the ending of the match]. But I won at the end!”

Going back to Atlanta, the powers-that-be weren’t very happy with that, even if WCW had never ran a show in Montreal and didn’t intend to in the future. But it didn’t really matter to Hogan.

With Jake “The Snake” Roberts battling health issues, he was dropped from the Montreal Comic Con. Jacques Rougeau Jr. was announced as a guest for this weekend’s event, meaning it will be the first time that Hogan and Rougeau will be together in Montreal in 17 years.

After WCW was bought by WWE, Hogan came back “home” to wrestle The Rock at Wrestlemania X8 in Toronto’s SkyDome. The next night, Monday Night Raw was in Montreal and even though Hogan was a good guy again and teamed with The Rock, he was still wearing his nWo colours. Therefore it’s only a few weeks later in May of 2002, when he came back in red and yellow, the same colours most fans grew up with, that they showed their appreciation. When he came to the ring, he received a standing ovation that lasted near 10 minutes, something unheard of. Plain and simple, Montreal made Hulk Hogan cry that night.

“That’s why I’m excited about coming to Comic Con, because I haven’t had a chance to sit down with the fans and tell them thank you, shake their hands, look at them in the eyes. It’s really important to me. So it’s a big day for me because Montreal is my favourite city,” he added.

Hogan loves Montreal so much that he even likes its weather. Well, kind of!

“I told my wife Jennifer that when we leave Florida I want a house in Montreal, because it’s more beautiful in Montreal during the summer than it is in Florida. I’ve also been to Montreal during the winter and it’s beautiful. But it’s brutal! Some days I would be in my hotel and there was so much snow I couldn’t see the building across the street. So it’s beautiful but it can get brutal!”

On top of the usual autographs and photos, fans in attendance Friday night have a chance to be part of the Hulk Hogan: Uncut. Who better than the man himself to explain what the fans can expect from that special event?

“It’s pretty raw. I mean, we come out, we just play a little bit of video of my career, Jimmy Hart introduces himself to the crowd, says hello to everybody and then brings me out. And when I come on stage Jimmy Hart goes down in the crowd with a microphone. And basically, I say, ‘Okay guys, what do you wanna know? What questions have you always wanted to ask?’ Most of the people are very respectful, very gracious. There are very interesting questions, very cutting edge questions. Most of the fans don’t care about my personal stuff. They want to know about wrestling. What’s Verne Gagne like? What’s Eric Bischoff like? What’s Vince McMahon like? It’s a lot of fun.”

Hulk Hogan will be at the Montreal Comic Con both Friday and Saturday. Tickets for autographs, photos and the Hulk Hogan: Uncut event, at 8:45 p.m. on Friday night, can all be purchased here.

Tickets for the Montreal Comic Con event this coming Friday, Saturday and Sunday can be bought here.