Wrestling fans know Trish Stratus for her WWE tenure, all about her matches and championships. But now that she’s doing more and more comic conventions, like the one in Montreal this weekend, what do her fans know about that? Would the star of Greek descent also be of “geek” descent? Find out in this non-typical Trish Stratus interview.

With her best friend Amy Dumas, better known as Lita in WWE, “Team Bestie” as they call themselves, are having a blast doing different comic conventions, generally just called comic cons. But even before that, Trish used to go to the conventions. 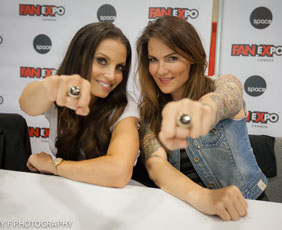 Lita and Trish Stratus at the recent Fan Expo Canada in Toronto. Photo by Tony Felgueiras.

“I used to visit the cons as a visitor. I would put a hat on and intrude the crowd to check out some stuff,” told Stratus to SLAM! Wrestling. “Now it’s very cool to return as a guest. I just love the chance to meet with everybody. The WWE provided us a chance to meet with the fans with the meet and greets. After I left I didn’t have much chance to do that with the movie I did, and taking care of my business. So this year after inducting my bestie, Amy Dumas, in the WWE Hall of Fame, I think we were looking at a way to hang out more. So we said, ‘Let’s do this because fans are really digging it.’ So we started off that ‘Bestie tour’ in New York, last week in Toronto, Montreal now, San Antonio at the end of the month. I just love meeting the fans.”

In a world where most fans are dressed as their favourite superhero, a hat is really the only disguise she used back then.

But come October, Trish Stratus became someone else. “I always waited for Halloween!” she laughed. “And Wonder Woman was often my choice.”

Being a girl, comic books was not really her thing as she grew up. It’s only when she became a young adult that she dug into it.

“I got into comics I was 18 or so. Actually my brother-in-law had a comic book store. I would help him at some conventions and I thought it was awesome to be part of that world.”

Even though Wonder Woman was her Halloween costume more often than not, her first comic book crush wasn’t on any DC or Marvel comics, but with one that was just starting.

“Betty and Veronica from Archie’s comics were part of my childhood, when I was younger younger, but when I was old enough to choose my comics, Danger Girl was the one. It was one of my favourite comics back in the day.”

Danger Girl was first published in March 1998, just before Trish would start her wrestling training. According to Wikipedia, “the comic stars an eponymous group of female secret agents who engage in adventures in the vein of James Bond and Indiana Jones.” 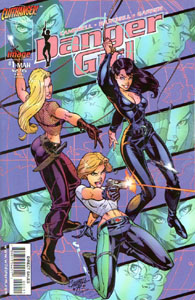 Fighting criminals, being a superhero, good vs. evil are what a lot of comic books are about. For Stratus, pro wrestling is too.

“We provide a role model, someone who’s doing evil and someone who’s doing good. We provide the good and the bad and usually we like to say that usually the good conquer the evil and that’s what happens in comics. So we kind of do the same kind of stories, we have the same set of rules, I guess you can say. We provide characters that are as relatable which is why everyone has a favourite character that they can relate to. We do the same thing, we go out and we’re strong and we conquer evil and the bad always gets in trouble. So I think there are a lot of parallels for sure,” said the 38-year-old mother of one.

During her WWE days, she was asked to do a lot of meet and greets, wrestling’s version of a comic con. Although many wrestling fans are comic books fans are vice-versa, Trish is noticing a difference.

“I see some of the same fans but for the most part it is different fans. Wrestling fans are a very unique group of people. I think there’s definitely a crossover. It’s neat to actually sort of see the difference at these cons where you’re sitting a couple booths away from Stan Lee. I don’t know, there might have been some wrestling fans in there or not, I’m not sure!”

In recent years, comic book fans were able to see more than any time before their favourite superhero coming to life in big-budget movies. If Thor is a big muscular God and Batman, well, is Batman, Trish settled for webs and metals.

“The other day I saw The Amazing Spider Man and I loved what they did with the franchise. I’m also a huge fan of Robert Downey Jr. I think he did an amazing portrayal of Iron Man and he’s very cool to watch. Watching comics come to life on the big screen has been a lot of fun. And we were very critical of making sure the story is told correctly. You are a little protective and I think they did a fantastic job.”

The native of Richmond Hill, Ontario will be in Montreal this coming Saturday and Sunday for the 2014 edition of the Montreal Comic Con. Besides the usual autographs and photos, Dumas and her have a question and answer scheduled for Saturday at 4:30 p.m.

Of course, fans on hand will be able to get her to sign pretty much any item, perhaps the 2013 WWE Hall of Fame program when she was inducted that year by none other than Stephanie McMahon. That night, she unfurled a huge list of all the people who helped her at some point during her career. On that thorough list, a few names could surprise the fans.

“I think fans would be surprised to know that Bubba Ray Dudley [TNA’s Bully Ray] was on the list. He’s on it because he was kind of giving me a trust/tough love when I first came in. But once I proved myself to him, he really opened up and was really kind and giving and would advise me on a lot of things. So when we finally worked together, once he saw that I was willing to take the table and I used to tell him: ‘Don’t protect me, don’t go easy on me, I just want to do it and do it good and make the fans proud,’ and he appreciated that. So we’ve became really close friends and we had a great relationship and he really helped me a lot.” 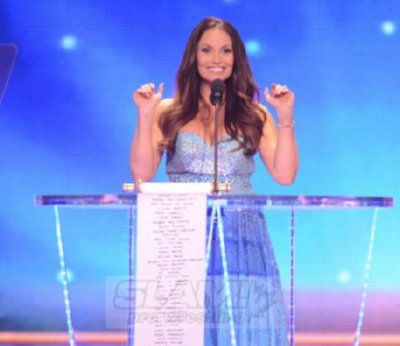 Trish Stratus and her list from her WWE Hall of Fame induction in 2013. Photo by Mike Mastrandrea

Also, a whole radio show crew from Toronto made the list as well.

“All the guys from The LAW show [Live Audio Wrestling: Jason Agnew, Jeff Marek, Big Daddy Donnie, Dan ‘The Mouth’ Lovranski, Wai Ting, John Pollock] were on there because that’s where I really first exposed myself to the wrestling fans. I used to host the radio show with them on Sunday nights at like midnight or one in the morning. So those guys were instrumental at the beginning of my career and were there when it all happened. They’ve been great and very supportive and they are really good friends of mine as well.”

Although growing up only five hours away from Montreal, she’s not really familiar with the city and she’s expecting to correct that in a few days.

“I love coming to Montreal. I used to go when I was younger. Then when I got into wrestling I came to Montreal many times, but I didn’t get to see too much besides the arena, the hotels and the airport. So what I’m excited about this time is that I’m gonna be able to do some sightseeing. I’m actually coming early with my mom and little Max [her one-year-old son] so we can enjoy the city for a couple of days before the craziness of Comic Con begins.”

For the French-speaking fans at the event this weekend, don’t hesitate to say a few words in French to Trish. She’s better than she thinks. As this writer got, you might get a “oui”, “un petit peu”, “merci” and “exactement” as well!

The Montreal Comic Con weekend is this Friday, Saturday and Sunday, September 12 to 14 at Palais des Congrès. For more information, check the website at: montrealcomiccon.com.

Pat Laprade would also like to point out that no one has EVER dressed as Trish Stratus in a comic con yet. Knowing what Montreal fans can do, let’s hope this weekend could be the first time. You can reach patric_laprade@videotron.ca, on his Facebook page or on Twitter.