With the help of The Usos, John Cena has once again plucked the vultures.

At the SummerSlam Heatwave Tour at the Ricoh Coliseum in downtown Toronto, Cena surprised the crowd in attendance by turning his no holds barred Street Fight bout against Bray Wyatt into a WWE World Heavyweight Title match. The bout was some seriously hardcore fun, well, as hardcore as the WWE gets these days. The show also featured the wrestling return of Chris Jericho, who temporarily left the WWE last year to tour with his band Fozzy, and Santino Marella announcing his retirement from in-ring action. 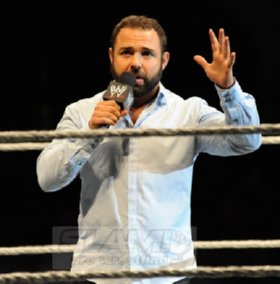 Of course, it didn’t take long before Harper and Rowan got involved in the championship match blindsiding Cena. As the unhinged hillbillies prepared to lay a beat down on the champ, The Usos joined the fray, clearing the ring of the worst dressed tag team in the WWE. The Usos battled Harper and Rowan back to the dressing room, evening the odds for Cena.

Without Harper and Rowan to back him up, Wyatt brought in his equalizer: a steel chair. Wyatt achieved a two-count by waffling Cena in the stomach and across the back. Brawling on the floor only opened Cena up to more punishment as he was thrown into a ringside fence and the stairs.

As Cena, Wyatt continued mauling each other along the entrance way, Cena laid out Wyatt with a snap suplex on the ramp. Using a guardrail as a battering ram, Cena then hammered Wyatt into the concrete floor. Back in the ring, Wyatt finally regained the upper hand, providing running commentary and counting his own pinfall attempts as he hit Cena in the head over and over again with the microphone. Clever that. 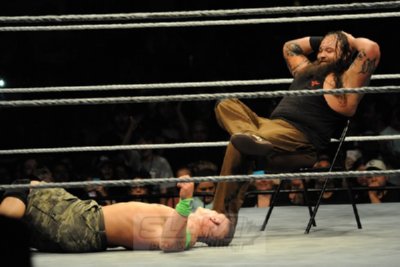 Bray Wyatt has to sit down during his match with John Cena.

Teasing an unlikely win, Wyatt unleashed a hardcore barrage on Cena avalanching him through a table in a corner, beating him with a chair and then executing Sister Abigail on the ringside fence which was left inside the ring. Wyatt attempted to put Cena through another table but found himself on the business end of an Attitude Adjustment for the three count in the finale of match that saw both men really give their all. Like or hate their personas, Cena and Wyatt continued the solid work rate which has become a trademark of their bitter feud, ending a simple local house show with a pay-per-view quality main event match.

Another pleasant surprise for the crowd was the return of Chris Jericho in his first match since coming back to the WWE. The partisan Canadian crowd welcomed their native son with the expected adoration as he faced off against The Miz, who has apparently become even more pompous since snagging the starring role in those crappy WWE Marine movies.

“How dare you ruin this crowd’s special moment. Did you think they came here to see you,” Miz questioned Y2J. After being warned repeatedly NOT to punch or kick Miz in his multi-million dollar face, Jericho popped him in the chops.

With the fans chanting “You still got it!” and Jericho replying that he never lost it, Y2J dragged a fleeing Miz and deposited him back in the ring but not before slapping him in the face with a fan’s sign.

The see-saw battle ended with The Miz’s figure four being no match for Jericho’s Lion Tamer.

In his street clothes, Santino Marella addressed the crowd apologizing for not being able to compete on Sunday. He is injured once again and announced he will be retiring from active wrestling. He will not be gone from WWE TV though, he will working in some capacity, maybe as a manager, maybe as a General Manager. He is not sure yet. He thanked the fans for his years of support. 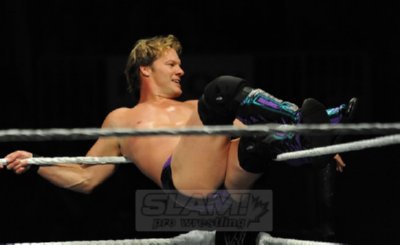 The Miz versus Chris Jericho