Bret Hart expects a great response at Raw in Montreal 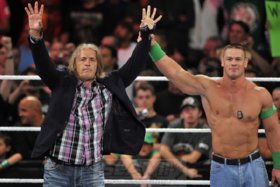 Bret Hart and John Cena at Raw in Montreal in September 2012. Photo by Minas Panagiotakis, www.photography514.com

The last time Hart was in Montreal for Raw, in September 2012, it was his first time back in town for the WWE since the infamous 1997 Survivor Series where he dropped the WWF World title to Shawn Michaels in controversial fashion and he received a standing ovation for several minutes.

“It was really special for me. It was a long-awaited moment for me to get a chance to come back for a different ending than what happened at the Montreal Screw Job in 1997,” he said. “It was just a better moment for everybody. I think everybody was happy, it was just a different moment that can transplant to better moments, from what was a very historic but ugly night.”

Hart back in Montreal with the WWE was seen by many as a closing chapter, the perfect ending to a story that started more than 15 years ago.

“Yeah, it was the last page left to turn. To not comeback to Montreal, to not have that moment with the WWE, for them and for me and the fans … you’re right, it was a very nice way to tie that all up,” said Hart.

“You know, I had already made my peace with Vince [McMahon], and with Shawn [Michaels], we shook hands on TV. But you know, in hindsight it would have been better if that could have been in Montreal because Montreal was where we needed to make peace. You know, I’ve come back to Montreal many times since and I get people stop me on the street corners, people were really affected and touched by what happened and I had a lot of Montreal fans who were apologizing and told me how sorry they were for what happened in Montreal.

“The truth is I always loved to come here and the fans I have here. If I was gonna get screwed over, I’m glad it happened in a place like Montreal. They didn’t just stand there and watch, it affected them and they appreciated my position and I always felt that night that I had a bunch of fans who would’ve backed me all night long. They were there for me that night and they are with me for the past 15 years or so.”

WWE may not be doing this every time Raw comes to town, but after the great reaction he had the last time, one would expect them to bring him back the next time around.

What is Bret expecting tonight from the fans?

On that same show nearly two years ago, Jerry “The King” Lawler, after he had a match and was back at his commentator position, suffered a heart attack that could have been fatal if it wasn’t for the medical staff on hand ready to help.

Montreal being what it is, one can expect Lawler to have a huge reaction for his return.

“Yeah, I think he’ll probably get a heck of a pop and rightfully so,” said Hart. “He may get the pop of the night and steal my thunder again!”

In a more serious tone, Hart remembers what it was like to go out to the ring and perform after what happened to Lawler.

“You know in wrestling over the years, people always talk about how in those type of situations, they always handle it wrong. You know even when my brother died and they kept the show going. When that happened with Jerry Lawler, they had the WWE medics and the medical staff right there, they were on top of it, he was getting the help that he needed right away. So there was a calming effect right there, knowing that this was a situation that was monitored and getting sort of handle,” said Hart.

“There were a lot of the girl wrestlers and the boys in the back who were really upset and very emotional, a lot of bad thoughts and everyone was really scared and worried. Michael Cole really proved himself that day with his calm, and it got a calming effect while the show was on. I just felt when I went out, I thought people were looking up to me to make sure I was sort of a calm presence in the dressing room and backstage and going out there with John Cena just showed everybody’s professionalism, that the show does have to go on. Everybody’s been glad that Jerry survived all that. It also showed that there was some improvement by WWE in how they handle those kind of situations compared to a few years ago.”

Bret’s presence on TV are rare but recently he was invited to be in Natalya’s corner, his niece, for her match against Ric Flair’s daughter Charlotte on the NXT Takeover show on the WWE Network. And Hart thinks highly of his former partner’s daughter.

“I’ve always been proud of Nattie. I think she’s a phenomenal wrestler on her own right. She really carried the torch of the family name for the last 10 years or so. She’s a really capable and skilful female wrestler. She knows as much as the best men wrestlers, she’s as skills as they are,” said a proud uncle.

“Watching Charlotte Flair, knowing the tragedies that hit Ric with his son’s passing, I knew that that match at NXT wasn’t gonna be your average match, it was gonna be a real important match not just to Natalya, but to Charlotte. I know Ric has been through a lot, it was gonna be one of those kind of special moments that we would be really proud. Natalya took the match really serious all week and probably for a couple of weeks. She wanted to tell a story and make a real impression on people for Charlotte and they did that. I was thrilled with the match. Just the emotion and the joy coming from Ric and his daughter, it was a special moment. It was a great moment for me, but for Ric, his daughter, Natalya. I felt like I was representing Jim The Anvil there that day. It was a little nice thing to be part of and I’m glad they called me up and I had the chance to be part of that.”

Bret “The Hitman” Hart will be in Montreal for Raw tonight. Announced match for tonight include John Cena vs. Seth Rollins and the newly-returned Chris Jericho against The Miz. Doors open at 7:30pm at the Bell Centre.