WWE 50: Celebrating 50 years of Sports Entertainment, is a sleek and attractive coffee table book covering the history of the WWE. This offering from WWE Books is different in so many ways from their past generic, filtered, censored nonsense, that I could not help but read it again.

Written by Kevin Sullivan, the 224-page history is split into decades with subsections focusing on the personalities, great moments and historical information that is factual. 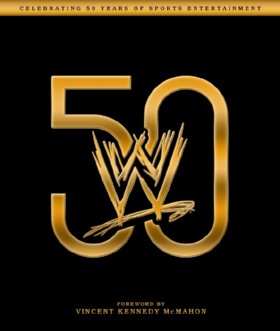 I was struck by the honesty allowed by the WWE. Pat Patterson admits that Shawn Michaels “was a little prick.” And Gene Okerlund states that, “Mr. T was the most unprofessional piece of work that I have ever had the displeasure of being associated with.” Honest statements and reactions such as these are peppered throughout the book giving it the feeling that you are looking behind the curtain.

On most pages there are quotes from WWE stars, office workers, celebrities and others that give insight into the feelings and back stories of the particular era.While it would be difficult to provide a comprehensive history of the WWE, the glimpses into each decade are pure delights. Perhaps the greatest insight provided are from the many quotes given by Vincent Kennedy McMahon, ranging on subjects from his foray into commentating (“What a maneuver!”) to the Monday Night Wars, right up to the present is refreshing and enlightening.

The slickly laid out book is filled with wonderful action shots from throughout the generations. Close ups of past championship belts, WWE memorabilia and rarely, if ever published photos make the pages jump out at the reader.

I was surprised by the omission of a brief biography of Antonino “Argentina” Rocca in the Capitol Wrestling Corporation section. The acquisition of Rocca as a talent for Vince J. McMahon (Vince Sr.) essentially gained him control of the Northeastern wrestling world and solidified his presence as the main wrestling promoter at Madison Square Garden. Strangely absent were thoughts from Hulk Hogan. Hogan’s likeness and successes dominate large swathes of the book, but we don’t hear his side of the story.

There are many neat features in WWE 50, such as the map that outlines the territories that once dotted North America providing the names of the organizations and promoters who ran them. Each era has a section featuring the prominent WWE stars of the time and a brief biography. You are reminded of the star power of these wrestlers that you may have forgotten about such as Junkyard Dog, Big John Studd, Pedro Morales, The Fabulous Kangaroos, Red Bastien and many more.

Each WrestleMania is given its own page with pictures, results and comments from people who were intimately involved in the shows. The Monday Night War is provided with 14 pages detailing the weekly ratings in a graph format along with pictures connecting to key moments in the fight for cable wrestling supremacy. The inside covers are resplendent with the many interesting pay per view and event posters from the WWE’s past.

Also, I enjoyed the glimpse into Titan Towers. The WWE’s office building in Stamford, Connecticut, appears to be a wrestling fan’s dream. The WWE employees decorate their work stations with interesting WWE products. I liked seeing the life-sized statue of Andre the Giant that greets guests as they enter the building.For a long-time fan this book is a breath of fresh air. The WWE opens up just enough to admit that there is a history of wrestling beyond their TV offerings. The book is a balance of fun, nostalgia and hard-hitting facts. While I would have loved to have read a detailed history of the WWE, this well-presented book made me smile as I went on a walk down memory lane with author Kevin Sullivan.