The mark of a great tag team is synergy – the joining together of two great individuals that results in something even greater than thought possible. This weekend in Windsor, Ontario, the legendary Jeff Jarrett and Canada’s godfather of wrestling Scott D’Amore will be teaming up to hold the first official talent search for Jarrett’s new Global Force Wrestling promotion, with that exact goal in mind. 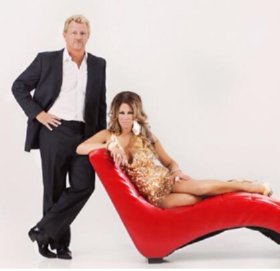 Jeff and Karen Jarrett are heading to Windsor, Ontario, this weekend.

The talent search and seminar will take place on Sunday, June 1st as part of the North American Sport & Hobby Expo, which runs Friday through Sunday at the WFCU Centre. In addition to the talent search and seminar, D’Amore’s wrestling promotion, Border City Wrestling, will be running shows on Friday and Saturday. And before the seminar on Sunday, there will be a fan Meet and Greet session with both Jeff and Karen Jarrett with autographs and photo ops.

“The Windsor – Detroit area has been very healthy for independent wrestling,” Jarrett told SLAM! Wrestling, explaining why he chose the event as the kickoff site for his roster search. “Scott and I have worked together, and developed talent together for over ten years, so (his city) was a natural fit.”

Indeeed, the two of them were cornerstones of TNA Wrestling’s “office” a few years ago, a period that many fans consider the company’s creative peak. D’Amore is confident that, with Jarrett as the driving force, GFW is well-poised for success.

“Jeff is one of the smartest and hardest working people I know, both in and out of the wrestling business,” he said. “With the experiences he gained launching TNA, (I know) he’s prepared (to) hit the ground running with GFW.”

It certainly would seem that Jarrett doesn’t want to gather any moss, so to speak, in getting the company rolling. Last month it was announced that the company signed a partnership deal with Mexico’s AAA promotion. The Windsor event is looking to further broaden the reach of the company and help it live up to its Global Force name.

On that front, D’Amore believes that Canada, while not unrepresented in any of the major companies, still has a huge talent pool that deserves a chance to perform on a global stage.

“Tyson Dux,” he answered with no hesitation when asked for an example. “He’s paid his dues for years, traveled the world. He’s the best Ontario has to offer.”

“Kongo Kong has a look and style that is so different that people will flock to see him; Phil Atlas, who’s had over a dozen tours of Japan is primed and ready; Cody Deaner — is there a more entertaining or engaging character in the business right now? Get this guy back on TV and this time out put him in a position to shine. And no disrespect to Ring of Honor, but Kevin Steen should get a shot on major American TV – he’s entertaining as all hell. There are (several others) I can think of that have the necessary ingredients.”

For Jarrett, there is one ingredient that he feels is critical.”

“Passion,” he stressed. “I’m looking for talent that has a passion for this business. Yes, they will need to know the basics and fundamentals. But a passion to get better and better on a daily basis is one of the biggest things that I’m looking for.”

And it’s one that he has in spades, as is evident when talking to him about GFW.

“I’ve been in the business for many years,” he noted, “but I’ve never been as excited as I am about the business of GFW. From the talent exchanges with promotions from around the world, the global talent search, starting this weekend in Windsor, as well as the fan engagement… GFW is really ramping up!”

For more details on the BCW events at the Expo, visit Sporthobbyexpo.com/wrestling

To buy special $30 advance tickets to the BCW weekend events (the wrestling shows, the Jeff and Karen Jarrett meet and greet, and the talent search / seminar), visit bcwfan.eventbrite.ca or call the BCW Hotline at (519) 969-1245

For wrestlers interested in joining the seminar, visit globalforcewrestling.com/seminar