Smackdown in Hotlanta: a great way to spend a Tuesday evening

Tuesday was the final television taping of Friday Night Smackdown in Atlanta, GA before this year’s Payback PPV. This generally means that most of the focus of the show will be on the upcoming PPV matches, basically WWE’s last chance to convince you to order the PPV. Smackdown did just that, but there were also several very enjoyable matches on the card, worthy of seeing even if there wasn’t any direct PPV implications. 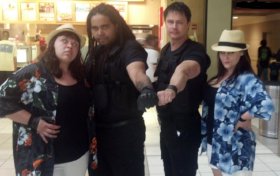 So THAT’S where Sister Abigail has been hiding all this time! Photo by Matthew Asher

Differences between Smackdown and Raw tapings

For those who have never been to a taping of Smackdown, it’s a little different than going to a Monday Night Raw show. The biggest difference is since Smackdown isn’t being broadcast live the matches and segments go one after another, without any delays like on Raw because they have to account for commercial time.

The other big difference is this week’s WWE Main Event was also being taped before the Smackdown show. Because of that, several of the wrestlers wrestled twice in one night with one being used for Main Event and the other for Smackdown. Both the Usos and the Wyatts all did double duty and at least the Usos changed wrestling attires in between the shows. I honestly couldn’t tell you if one, two, all or none of the Wyatts did the same thing.

I mention the differences between the shows because while Raw has to do everything as it happens in real-time, if something bad or just unintended happens during a tape-delay show, WWE can edit it out or just not focus on that one thing. This is important because the VERY FIRST segment of Smackdown had the Shield coming to the ring to announce their intentions at Payback against Evolution. What they said is what you’d expect. However, just as Seth Rollins begins his speech, some woman jumped out of the crowd and started to make her way to the ring. Security was able to cut her off and take her away almost instantly. Rollins had maybe spoken five words before that interruption and simply started over once she had been detained. So if this week’s episode just has Seth go into his speech without a quick interruption, you’ll know what happened.

Best match on the card

The best match of the night, as far as both crowd reaction and the overall match quality, was the Champion vs. Champion bout between US Champ Sheamus and IC Champ Bad News Barrett. Nearly the entire match was filled with the back and forth chanting of the crowd showing their allegiance to each wrestler. It was a physical match with both men taking some nasty looking bumps.

While I won’t spoil the ending, there was one spot that I’ve never seen before and the fact that is came from two of the bigger guys on the roster was even more impressive. Early in the match the fight spilled outside the ring and Sheamus tried to Irish Whip Barrett into the ring steps. Barrett jumped over the steps, stopped on a dime and then kicked the ring steps into Sheamus, knocking him down and turning the tide of the match.

The only problem with this match was simply that it wasn’t the actual main event. Again, because these two men will not be competing against each other on Sunday the WWE didn’t feature it as the final bout of the night because there were other storylines and angles that will actually play out at Payback. But for those watching Smackdown this week, you will definitely want to watch this match.

As for the ultimate question that Smackdown needed to answer: should you purchase the Payback PPV? Even with the knowledge that this PPV will not be featuring a World Heavyweight title match, I think the WWE did a good enough job where the answer is a yes. Not a Daniel Bryan YES! but a yes nonetheless.