Stables and factions are one of the most iconic parts of professional wrestling. When thinking of factions who have run roughshod over their respective promotions, names like the New World Order, The Fabulous Freebirds and D-Generation X come to mind. The power in numbers leads to dominance and the unique blend of personalities that come together in a chase for greatness leave a lasting impression in history.

WWE: Wrestling’s Greatest Factions takes a look at factions from all over. Whether it be stables that never truly got past the middle of the card or legendary groups of talent, the work captures many of the memorable stables in wrestling history.

The format of the DVD runs in a countdown style without any official rankings. An introduction and video package of the group is shown, wherein various WWE superstars and personalities give their thoughts on the stable. The video package is then followed by a match involving members of the faction. The structuring of the work is runs clean, allowing for equal focus on all of the factions listed. 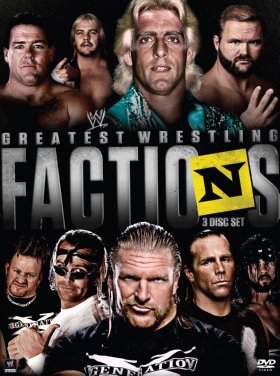 Another pro of the set is the multitude of factions included, giving a cornucopia of matches from of all different varieties and styles. However, this also comes with a con of not being able to see the best of a faction’s work over time. For example, Right to Censor, while entertaining in their era, do not have the body of work that The Four Horsemen do. Many would trade a Right to Censor bout for one or two more of the Horsemen’s finest.

That opens the door to the inevitable criticism of the factions that are included. Factions such as the Dungeon of Doom or the Oddities are not necessarily great by any stretch of the imagination. Though interesting to get a little insight behind these lesser-celebrated factions, their inclusion on the set is a bit ill-fitting.

As with any set, it is hard not to make a controversial decision. Countdowns and lists of top works in a genre prove that and often generate discussion. For WWE: Wrestling’s Greatest Factions, the list provides a multitude of stables to reflect upon. Whether some of them deserve to be included on a list of greats is up for debate, but that perhaps is the most fun about countdowns and lists of these nature. While there are some flaws in the set, it is largely an entertaining watch with smooth structure that makes the hours pass by with ease. The set is a worthwhile buy that will provide questions, controversy, and entertainment.