The obituaries for Shirley Temple Black, who died at the beginning of February, rarely mentioned that her brother George had been a pro wrestler. It’s a neat story that deserves telling.

George Francis Temple, an accountant and banker, and Gertrude Amelia Krieger, a homemaker, had three children, though only one became a worldwide child movie star. 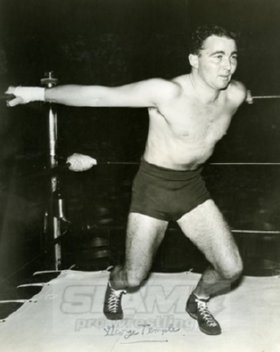 Jack was born January 3, 1915, and George Francis Temple Jr. (Sonny) came four years later on January 24, 1919 in Los Angeles. Their little sister really was little compared to them; she was born on April 23, 1928, making her 13 years younger than Jack and nine younger than George.

While she went on to star on such films as Stand Up and Cheer, Bright Eyes, The Little Princess, her brothers nicknamed her “La Temple,” and the family lived in the Brentwood Heights area of Los Angeles. Jack went to Stanford University, and George was parcelled off to a Los Angeles military college followed by the New Mexico Military Institute in the fall of 1935.

But family was family, and later Jack served as the best man at Shirley’s first wedding to John Agar, and George was an usher — though he arrived late because of all the traffic around Wilshire Methodist Church (an estimated 12,000 people were gathered outside).

In Shirley Temple: American Princess, writer Anne Edwards talked about George: “The athlete in the Temple family had always been her brother Sonny.”

Temple compared her brothers in her own autobiography, Child Star, released in 1988. “George, Jr., was muscular and athletic; Jack, lean and sensitive like his mother.”

The military school led to the Marines for George.

His sister’s fame was such that the news of him signing up with the Marine Corps, in October 1940 at the San Diego Marine Base, was actually news. He had just finished his freshman year at Loyola College. “I was getting bored with civilian life,” he said at the time, “and the Marines, who always seem to be doing things, appealed to me.” He finished his training in December of the same year, and was assigned as a mechanic. He hoped to eventually be a pilot.

“When he joined the marines in March 1941, he was over six feet tall, weighed two hundred ten pounds and had aspired to be a professional football player,” wrote Edwards. “Before sending him to the South Pacific, the marines had turned him into a highly competitive amateur wrestler. After years of feeling like the non-achiever in his family, Sonny had been proud of his new accomplishment. He had fought at Pearl Harbor, and his subsequent war record was viewed by his family with great pride.”

The attack by the Japanese on Pearl Harbor in December 1941 was a trying time, wrote Shirley: “Brother George was stationed with the Marines at Ewa Plantation, a target of Japanese air onslaught, and for days afterwards we heard nothing from or about him. In desperation, Father finally turned directly to FBI Director Hoover, who passed word to George to call home. We then learned his entire company had been invited to a Japanese wedding the evening before the surprise attack. Exuberant on sake and reeling homeward, George had fallen asleep on the grassy parade ground before his barracks and under a canopy of tropical stars. With dawn came Japanese dive bombers screaming down to strafe the buildings, and setting his mess hall afire. George had watched the horrifying spectacle from mid-field, propped up on his elbow.”

Shirley Temple was a big part of the war effort, supporting the troops, and she would occasionally slip in a “Hello, George” to her brother on radio shows.

Like a lot of servicemen, after the war, George was at a bit of a loose end. He tried to be the wrestling coach at Santa Monica High School, his alma mater, but he had wanderlust. 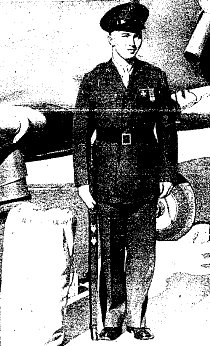 Shirley Temple’s fame was such that when her brother, George, enlisted in the Marines, it was a story.

“By night he wrestled professionally, usually billed as the ‘good guy’ in tag-team matches with new colleagues like Nebraska Wildcat and Swedish Angel,” wrote his sister. “One errant weekend he slipped across the Mexican border to Tijuana and married an ecdysiast dancer from Detroit who had become a groupie trailing him from arena to arena.”

Getting the media to pay attention wasn’t hard for George Temple.

An Associated Press story from March 1946 talked about his chosen profession, and his family’s distaste for it.

“George refused suggestions that he take a pseudonym,” reported AP. “He said he had no intention of capitalizing on Shirley’s name ‘but if the newspapers mention that angle you folks will simply have to grin and bear it.'”

Indeed, the family wasn’t on board.

“In perfect synchrony with my film antics, brother George chose this moment to resign his job as a high school wrestling coach and enter professional wrestling full-time. At his debut Father sneaked into the last row at Ocean Park Arena to watch him eventually pin someone called Iron Duke Works. Instead of congratulating his son at ringside, Father stamped home in a huff, apparently more repelled by the whole environment than pleased with his son’s win,” wrote Shirley Temple. “Mother picked up his sense of chagrin, so I tried to intercede. ‘Look, Mom, getting flung around is just the entertainment game. There’s more action in the ring than in some four-star movies. I’m in the business, why not him?’

“Eventually Father begrudgingly accepted the inevitable, but Mother stood irrevocably against the whole idea, the profession, the people, and the places he wrestled. When George filed for divorce from his wife, citing ‘extreme cruelty’ for having produced an eight-pound baby boy only six months after their wedding, Mother was quick to point out how right she had been all along.” 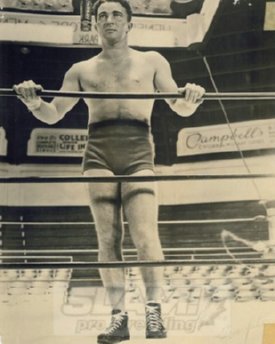 The family life of George Temple Jr. is a little complicated. He married four times, first to Florence Bruce, mother to his son, Richard Temple. Divorcing after two years, “Little Butch” was raised by his maternal grandparents, Virginia and Howard Bruce. Later, George’s second union was to Patricia Ruth. According to Edwards, it “ended in a bizarre divorce action that named another man as the father of the estranged Mrs. Temple’s five-month-old daughter, Kelly Ann.” At the time of his passing in 1996, his wife was named Grace.

But back to the wrestling.

A Chicago program from September 1946 described the 200-pound George: “His colorful wrestling, coupled with his personality which can be likened to Shirley’s only in an athletic way, has proven his capabilities as a wrestler.”

Like George Temple, Lord James Blears had survived the Second World War and entered pro wrestling. “Everybody wanted to wrestle in those days, so everybody went to the YMCA and wrestled. The YMCA was jammed with the wrestlers,” recalled Blears, saying George was good for business. “He was a good draw.”

In a feature written by Lee Dunbar of the Oakland Tribune in February 1947, he described George as “an easy young fellow to engage in conversation. He looked smart as a whip and his words verified his appearance.”

George talked of his desire to make his own name. “You see, for a long time in the back of my mind existed a yen to wrestle, and that desire was helped along by being referred to always as ‘Shirley Temple’s brother.” I wanted to prove to many people, and to myself, I could do a good job with my own talents, not because I was the brother of a great movie personality.”

It would not be a long career, though. He was in a high-speed motorcycle accident in the Mojave Desert in January 1948 (just after his sister given birth to his niece, Linda Susan). In May 1955, he was hit with a blood clot in the brain, paralyzing him on right side and costing him the power of speech.

“Subsequently and to everyone’s apparent surprise, George regained enough mobility to move home, but within weeks returned to Sawtelle Veterans Hospital with an embolus lodged in his lung,” wrote Shirley Temple. “Recovering slowly again he went home, but when the paralysis worsened he returned to the hospital, a seriously ill man with complex symptoms not well understood.”

Naturally, his sister used her fame to help raise funds for the National Multiple Sclerosis Society, rising to become National Chairman of Volunteers. It was “the first time she had become involved with a national campaign of any sort, and she discovered how good she was at it,” wrote Edwards. “Through her work with the National Multiple Sclerosis Society she had heard that the Soviets had developed advanced techniques for treating the disease. Sonny’s condition was swiftly deteriorating, and by Christmas 1964 he was confined to a wheelchair.”

In a 1972 interview with the Chicago Tribune, Shirley Temple Black, by then remarried and an American diplomat, talked about her brother and her search to ease his suffering from MS.

“He’s had it since 1952 and he’s paralyzed from the waist down. He has a very good outlook on life, and a very good wife, but it was quite an adjustment for him, because he was an athlete. To go from gymnast, professional wrestler, and judo instructor to a wheelchair,” she said. “I’m a co-founder of the International Federation of Multiple Sclerosis Societies. I went to Moscow in 1965, just because I’d heard reports they’d found a cure. They did have a vaccine, it turned out, but it was investigated — there and in the United Kingdom, too — and found not effective. I look all over the world. Every country I’m in I talk to doctors about what kind of research they’re doing.”

Their parents died within a couple of years of each other; Gertrude passed away on January 1, 1977, the couple’s 64th wedding anniversary. George Sr. died on October 1, 1980 at the age 92; he had been living at his daughter’s home.

George Jr. lived until May 27, 1996, suffering from another major stroke in 1993. He was residing in Laguna Hills, California at the time of his passing, but died in the Veterans Administration Medical Center in Long Beach.

“He was a beloved brother, and I’ll miss him greatly,” said Shirley Temple Black at the time.

The genesis of the article began years ago, as a part of The Pro Wrestling Hall of Fame: Heroes & Icons (written with Steven Johnson and Mike Mooneyham). When the requested interview with Shirley Temple Black didn’t come about, the piece on George Temple for the book fell by the wayside. Still, it’s a pretty good book, if I can say so!