In the world of social media, it is easy to vent your thoughts and in the case of the chaos of Hardcore Roadtrip in London, Ontario on Saturday, offer up condemnation of a promoter who walked out without paying the talent for the evening’s show or arranging for transportation.

Ground Zero for the outrage is Mark Livingston’s Facebook page.

On it, wrestlers and fans speak their minds, and a few videos from the night are surfacing.

Wrestler Gregory Iron is one of them: “Last night, I landed on my neck and head during a match at Hardcore Roadtrip, which I’d like to make clear was my fault. Despite the pain, I finished the match. By the end of the evening, it was discovered that promoter Mark Livingston faked a heart attack, and left without paying any of the wrestlers. Mark Livingston owes me money after I literally almost broke my neck on his show. Who knows the potential permanent damage I may now have for performing on an event for which I wasn’t even paid for. Do not support Hardcore Roadtrip. DO support Stephen DeAngelis, who busted his ass booking a show for another unprofessional EXTREME scum bag, along with the wrestlers who risked their bodies for zero pay.”

And that was among the printable responses.

Referee Harry Dee worked the show, honouring a commitment he’d made last year, and having to miss the Battle Arts show that was on in Mississauga at the same time. He wrote on his Facebook page (edited for length and content): “The shows themselves were very good. The talent busted their asses for the fans in attendance. (The) boys were giving it all killing themselves for these fans. I have to say it is the fans that make you want to keep going. These awesome people, not only cheered our decision.. but offered to have strangers in there homes, and to drive everyone where they had to be. LONDON ONTARIO THANK YOU..MARK ANDERSON ..LIVINGSTON?? F*** YOU. It is ironic that this same promoter, recently was bashing another piece of s*** promoter (that had apparently) screwed a bunch of fans. To all the U.S talent, thank you ladies and gentleman and I hope you all arrive home safe. I hope to see you all again one day… I know it wont be for that d***head. 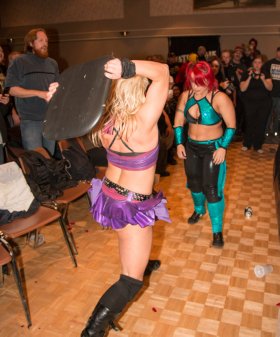 Rising Canadian star Leah Von Dutch (@LeahVonDutch) went from a high to a low: “I still worked with Jazz, LuFisto and Jewells. I have cracked ribs but I cherish the experience.” … “Big SORRY to @notorioustid. Was right all along. Had 2 great matches and the boys/girls got screwed!” … “No broken ribs! Doc said to take it easy for a bit though. Super relieved!!”

LuFisto, one of the top woman wrestlers in the world, drove from Montreal to London for the show. She wrote on her Facebook page: “Back home. Still feeling sick and upset. All those vets screwed. Makes me so sick. Stephen DeAngelis, thank you for everything. You are a wonderful man and a true pro. Sorry we had to work together with that ass promoter…. And to my brother Chad Warhed, thanx for being there for me as well as your lovely wife. I love you guys. Xx” … “Didn’t sleep. Feeling so sick. From now on, unless I have a very long term and established relationship with a company, EVERY promoter pays me in advance or I don’t show up.”

Tabercil is an Ontario photographer, whose work has graced these SLAM! Wrestling pages, and he was stunned by it all: “It should be a straight-forward and simple idea: make sure BEFORE the show that you can pay all the wrestlers and the other expenses. I know that if I were ever foolish enough to act as a promoter for a show I’d make sure that even if it ended up being a building completely empty of a audience, the guys & girls in the locker room get their money. #ShakingMyHead”

On Friday, Devon Dudley (@TestifyDevon) perhaps hinted of things to come: “Due to financial issues for the company Hardcore Roadtrips end, i will not be at this weekends shows! Sorry to the fans.”