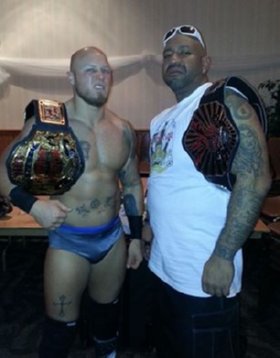 Twenty-four hours ago, all was good with ECW original “The Kingpin” Angel Medina, and in particular, his view of London, Ontario’s Hardcore Roadtrip promotion, where he was returning to defend the belt he’d won last year. Cut to this morning, however, and boy, how things have changed. During the show, the company’s promoter Mark Livingston bolted with the cashbox, stranding the wrestlers in the city with no arrangements to get them back to their return flights. Medina shared his thoughts on the matter with SLAM! Wrestling before his flight home.

“It sucks, man,” he said, clearly saddened by the goings-on. “It just pisses me off. The whole locker room put 110% in for this show to give the fans what they wanted, and this guy just slapped them in the face. It’s just wrong.”

Though nothing has been said from the company about what happened, Medina provided a chronology of the events based on his experience.

“Let’s start from the beginning,” he began. “Early morning on Friday, (Livingston) called Devon, and told him that he didn’t have enough money from the show to pay him – the deal was that he was supposed to pay Devon when he got to the airport. Then, the Mexicans didn’t show up because of visa problems. Then, at the show, he told Rhino and (2 Cold) Scorpio that he couldn’t have them wrestle twice – because he was trying to save money, he could only afford to have them wrestle once. Nothing major, that sort of thing happened last time.”

“Later, I went on stage to watch the main event. And as the match was about finished, Jazz said to me, ‘I haven’t seen Mark.’ I said, ‘the last time I saw him, he was up front at the ticket gate.’ She went over there, and came back and said, ‘I just went up there, and he’s not up there. They told me his wife had to take him to the hospital.’ Which didn’t make sense, because if he had to be taken to the hospital, why was his wife seen packing up all his stuff – packing the pictures, packing cupcakes away, stuff like that. If your man is sick – having a heart attack, or even indigestion, even if he says he’s just not feeling well, a panic attack or whatever – why would you be packing things up, and making sure everything got out of the building?”

“So a couple of the boys called up the hospital to see if he had been admitted, and they had nobody there checked in by the name of Mark Livingston or (the other name he has used in the past) Mark Anderson. We had his address, so some of the guys went to his house, and he wasn’t there.”

Since then, there has been little news, and certainly no official comment from the promotion. While the whole situation has clearly frustrated a lot of people, Medina is personally even more bothered, because, as a mainstay of the company, the first champion of the company, and someone who, in the face of similar allegations about the promoter last year, staunchly defended the company, it’s like he was personally slapped in the face.

“What pisses me off,” he confirmed, “is that I clearly was an advocate for him. I pushed the idea of giving him a chance, giving him an opportunity, because he seemed to have the passion and the drive. I’m mad because I was an ambassador for this guy.”

He also blew a big chance to do something special on a long-term basis. As last year’s and this year’s shows were well-received in terms of the action delivered and fan response, and there had been announcements that the show was going to return for a double-shot in London and Toronto, it’s certain that too many bridges have been burned for that to happen.

“He had the opportunity to show the fans what a company of hardcore wrestling could have been. To take the ball that Extreme Rising dropped and run with it, and do things the way they were supposed to be done. He could have made London the place to be – the place to go to see good wrestling,” observed Angel.

“I will never, EEEVER work for him again,” said Angel, impersonating Chris Jericho’s familiar phrase – the only laugh that could be mustered in the aftermath of last night’s experience.

Which is not to say that Medina has no intention of coming back to Canada – on the contrary. The outpouring of support that he received from the fans was, he said, amazing and he will never forget it. They rallied behind the wrestlers, driving them to airports in Buffalo, Toronto, and Detroit, to get the stars to their flights. Since, the fans have taken to Facebook and social media sites to blast Livingston for what’s been done.

“I appreciate everything the fans have done,” Angel said, gratefully. “They’re the ones that were there for us when the chips were down. I thank the people in London – from the ring crew, to everyone who drove the wrestlers. It really hit me in my heart to see how the fans came to us.”

“More than the money, more than the having to wait for flights, it bothers me that the fans are getting hurt. A lot of them,” he noted, “bought tickets for the next show.”

“If you knew you didn’t have any money at 11-o’clock in the morning,” speaking to Livingston hypothetically, “why would you sell tickets to the next show knowing that you’re not going to have the next show? You had to know in your heart that you were not going to do it.”

“(The wrestlers) were trying to keep the thing honest. If somebody wasn’t going to show, we weren’t going to wait until show-time to tell everyone – we would announce it on the internet. We never wanted to swerve the fans – we wanted to keep everything honest. When we’re trying to be up front with the fans, but the main guy isn’t doing that to us? It’s beyond words.”

SLAM! Wrestling has reached out to Mark Livingston and Hardcore Roadtrip for comments on last night’s event. Keep checking SLAM! Wrestling for any updates.