Whether you’re an old school wrestling fan from the 1980s, or someone who learned about The Iron Sheik from his exploits on Twitter, the new documentary about his life, The Sheik, is a must-watch for fans new or old.

The far-spanning documentary, The Sheik, pulls few punches, looking at the life of Khosrow Vaziri and his professional wrestling character The Iron Sheik.

The 95-minute feature, which makes its debut tonight at the Hot Docs International Film Festival in Toronto, was made possible through a crowdsourcing fundraising efforts of Vaziri’s managers and family friends Jian and Page Magen. 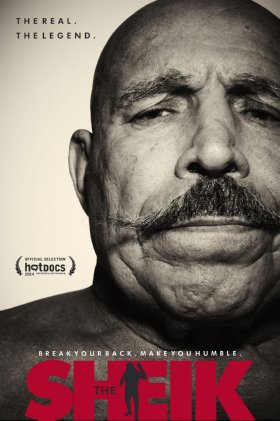 The documentary is a moving look at the life of one of the most unique professional wrestlers in the history of the sport. From clean-cut babyface wearing USA singlets when he started out in Minnesota in the 1970s to one of the most hated villains in history, Vaziri has seen — and done — it all.

One of the best parts of the documentary is the wide cast of people interviewed for the project — a real who’s who of professional wrestling, which is difficult to accomplish these days for a non-WWE project.

If you’re scoring at home, that’s nine WWE Hall of Famers on that list.

Despite being produced by those close with Vaziri, the documentary isn’t a puff piece, something the producers should be commended for. The film takes an honest, and often times uncomfortable, look at Vaziri as he began a quest to get clean from drugs at the urging of his wife and daughters along with the Magen brothers.

The documentary hits home when Vaziri speaks about his oldest daughter Marissa, who was murdered in 2003. It was that event which is said to send Vaziri down the wrong path, where he was in denial over his drug problem and insisted he was self-medicating. We see in-depth footage of Vaziri obtaining drugs at a seedy motel and you get the feeling the arguments with his wife, which are portrayed here, were a regular occurrence.

The film also looks at Vaziri’s contributions to the wrestling industry. He was credited with helping Hulkamania really build when he dropped the WWF World Heavyweight Championship to Hogan in 1984 — being willing to do business when he was offered $100,000 by Verne Gagne to bring the WWF title back to Minnesota.

He refused, and the rest in history. Both The Rock and Foley spoke about how The Iron Sheik was the perfect opponent for Hogan at that time.

But when it comes to impact, the film captures wrestlers from all eras meeting with Vaziri at various fan festivals. The Rock, in particular, puts Vaziri over for always being there to give advice and what he contributed to his career.

The film also discusses the impact Vaziri’s 1988 drug arrest had on his life and career.

But it also looks at Vaziri’s recent career renaissance — from his ranting YouTube videos to his infamous appearances on The Howard Stern Show and other media appearances — and how his Twitter feed, @the_ironsheik, has created a whole new legion of Iron Sheik fans, those who want to follow along to his rantings on Hulk Hogan, Miley Cyrus, Justin Bieber, or whatever else is going on in wrestling or pop culture.

His renaissance wasn’t just limited to his Iron Sheik persona. But it extended to his family life, as well. The documentary shows Vaziri playing with his grandchildren, having patched things up with his long-time wife Caryl, whom he married 40 years ago this year, and his children. It’s the exact opposite of the raving lunatic fans see in the media.

The Sheik takes a look at the complicated life of Khosrow Vaziri, both good and bad. Long-time fans will appreciate the behind the scenes access to one of most infamous personalities in the history of professional wrestling, while new fans will gain an appreciate for what Vaziri went through, and continues to go through at 72 years old, as he tries to stay clean of drugs and do what’s right to get healthy.

Do yourself a favor and watch this documentary — pre-orders are out there now for when it finishes its festival runs. And if you don’t, well, you could face some humbling consequences.

EDITOR’S NOTE: SLAM! Wrestling Producer Greg Oliver was a consultant with this project and is in the documentary. He has not seen the documentary and was not compensated for his time in the movie.

Matt Bishop has written a lot of pieces for SLAM! Wrestling over the years, but this is his first movie review. How’d he do? Email him at [email protected].