‘Can you do timeouts?’ A WWE show through virgin eyes

TORONTO – If I had to guess, I’d estimate that I’ve been to more than 150 WWE events over the years, so it was refreshing to bring a couple of neophytes to the live event Friday night at Toronto’s Ricoh Coliseum and experience the spectacle through their eyes.

Along for the ride were my son, Quinn, who has been to one other WWE show and a few indies, and knows a lot about wrestling simply by living with me, and his best friend, Julian, and his father, Michael. 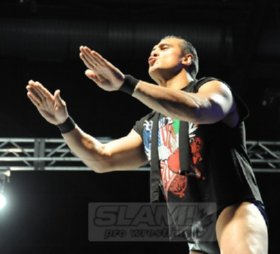 Alberto Del Rio asks the crowd for quiet — good luck with that. Photos by Mike Mastrandrea

The kids, aged seven and eight, respectively, had fun for sure, though Quinn was far more into the booing for the bad guys (more than once he asked, “Who’s the heel, Dad?”) and cheering the heroes.

As for Michael, like many people in our age bracket, there’s a familiarity with pro wrestling that stems from the heyday of the WWF and Hulkamania. From the entire roster, the only WWE name that he knew was John Cena, and he wasn’t even on the show.

The best example of the newness of it all came in the opener, which followed a showdown at the very start of the show between the Wyatt Family and The Shield, to hype the main event. Brad Maddox came out to announce that it would be a Street Fight match.

The first match was pretty darn good, with Alberto Del Rio facing Dolph Ziggler. It was textbook heel versus babyface, which made it easy for the newbies to follow.

Upon a kick to Ziggler’s head by ADR, Michael cried, “I think that was his tooth” that went flying. (Probably the aforementioned gum!)

Julian continued to pepper us with comments and questions:

“Can you do timeouts on this?”

“They do end up looking at each other’s bums a lot.”

“This is a terrible job.”

The Damien Sandow versus Sin Cara match was stoked twice by some mic work by Sandow. He was on the big screen in the arena to start the night, and demanded proper respect from the Canadian “halfwits” — “eh!” — for his entrance. Naturally the fans booed him instead. Kane came out and Sandow hightailed it. Kane beat up Sin Cara until Brad Maddox came out to try to talk him down. Maddox was attacked, which brought hoots of laughter from our kids — somehow the guy in the suit getting beat up is funny? The Big Show arrived and Kane and Show brawled, but it was never an official match. At one point, Kane grabbed a section of the ring stairs to use as a weapon. “That’s old-school,” Michael explained to his son.

Michael and I had a bunch of laughs during the Kofi Kingston and Titus O’Neil bout. He asked about whether Indian burns were allowed, as his brother used to do to him. I confessed I wasn’t sure, but that it’s likely that purple nurples and wet Willies were permitted. Anyone know for sure? 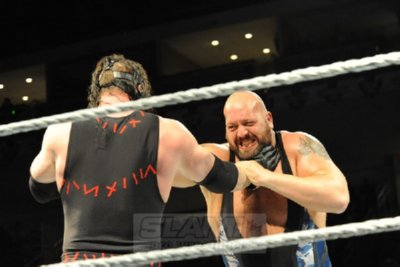 Kane and The Big Show go for chokeslams at the same time.

By far the most exciting match of the night was the main event, and the fans — Ricoh was about three-quarters full — got right into the Wyatts and The Shield. There were dueling chants of “Lets Go Wyatts!” and “Let’s Go Shield!”

There were two tables broken, kendo sticks, and chair shots. It was chaotic, but structured, if that makes sense.

I reflected back to what Seth Rollins told me on Monday for an interview on this site: “It’s definitely different than working by yourself, because there’s so many moving parts. Especially in a six-man tag match, you’ve really got to be aware of what’s going on, not just for yourself, but for everybody else in the ring. You’ve got to play off each other’s strengths, and weaknesses too, which is different than being out there by yourself. It’s a whole different ballgame, but we’ve definitely perfected the art, I’d say.”

At the end of the night, we had two very tired little boys, and the slow transit service, combined with the Blue Jays game at the Rogers Centre getting out around the same time didn’t help.

It might be a couple of years — if ever — until the boys are like the couple of slightly older girls that we met on the streetcar ride down to the Exhibition grounds. They knew all the wrestlers, had John Cena and Ryback shirts on, and I was told by the one girl’s mom that they spent a good part of last spring wearing title belts to school.

Beats the hell out of princess dresses and tiaras in my book.

WWE returns to Toronto on Sunday, July 6th at the Ricoh Coliseum.

Greg Oliver had fun last night seeing a lot of old friends. Thanks to Harry D for the extra front row ticket that we shared, and to So Cal Val, in town before a long drive up to Timmins, Ontario, who marked out for my Wahoo McDaniel t-shirt — that made my night. Greg can be emailed at [email protected], and you can follow him on Twitter @gregmep.