Bout with AJ Styles has JP Simms dreaming of more

There are times when you can actually see a turning point approaching. For JP Simms, a veteran of the Nova Scotia wrestling scene but unknown virtually anywhere abroad, that day is coming on March 6th, when he gets a chance to face AJ Styles in a big show in Halifax.

Needless to say, he’s pretty stoked by the opportunity in the main event of the WrestleCentre show at the Halifax Forum Multi-Purpose Centre. 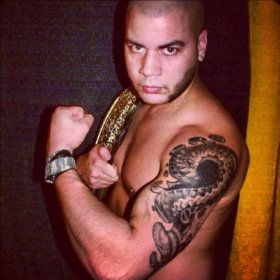 “It’s an opportunity for me to get in there with an international star and show him what I can do, learn from him, and take whatever I can from him,” Simms told SLAM!! Wrestling. “Literally take that step up, because I feel that this match can really help elevate my career to a level it’s not on. For them to bring him in and have the confidence in me to wrestle somebody like him is definitely a huge motivator and boost for me. I’m looking forward to it more than anything in my entire life.”

The 27-year-old Simms is looking to break out, both with his name value and from the province.

“I’m definitely in a position in my career where I’m looking to do anything I can to break out of here, and start wrestling way more in other places to get my name outside of here,” he confessed.

The wrestling scene in the Canadian Maritime provinces is pretty slow, and maybe there are only a few bookings a month for the 5-foot-11, 202-pound Simms, who works in security. And some of those bookings have been pretty dire, he admitted.

“There are a lot of rinky-dink promotions around Nova Scotia and some of them are just unbearable. You’ll look at them and you shake your head in amazement that some people really think they know what they’re doing when they don’t,” he explained. “It discourages people sometimes, because you want to get on every single show that you can wrestle on, but at the same time, it’s an empty arena.”

There are multiple issues, he said. Promoters don’t always listen to the fans, but instead are marks for the past, bringing in oldtimers, or relying too much on the local talent — which is often untrained or not trained enough.

And Simms would know, because he was one of them once.

“I’ve wanted to be a wrestler since I was eight years old — and I’m sure that’s a clichéd thing — but I really did want to be a wrestler since I saw Shawn Michaels and Bret Hart fight in the Iron Man match back in 1996. I remember that was the moment, ‘No matter what, I’ll do this,'” he recalled. “When I was 19 years old, I started training around here, with some hokey-pokey, backyard feds, but that’s how everybody gets their foot in the door.”

After debuting in February 2007, Simms wanted to truly learn his craft and moved cross-country, signing up for Lance Storm’s wrestling school in Calgary, Alberta, Canada.

That time in the fall of 2008 under Storm’s tutelage changed him, said Simms.

“I learned so much. I learned a lot of discipline, in life and in training. We started with a lot of workout drills, because the first thing he wanted to do was to smarten us up and get us in the best physical shape that it took to do that, along with the 100 bumps a day that we took. The thing that he was really able to teach us the most was the right mind — he understands wrestling so well that he teaches your mind.”

During matches now, Simms will find himself recalling specific lessons from Storm and the light bulb going on in a way it didn’t always do when he was in training sessions.

“I feel like the thing I learned the most from him was the discipline,” said Simms. “Anybody can do moves, but with the discipline to know how to do them and where — he taught me the art, the psychology part of professional wrestling.”

Simms has gotten the chance to learn from other veterans of the business too, in the ring on indy shows. He singled out Marty Jannetty, Charlie Haas, Matt Striker, and Highlander Robbie MacAllister.

“Wrestling those guys was great and a huge learning experience for me,” said Simms. “They’re very nice guys to work with, they make you feel comfortable, but they help you, they tell you what you need to know. Afterwards, I felt so comfortable, I felt so happy, they made me feel good. They let me know that what I was doing was good, but to keep a good head on my shoulders and to keep a clear mind. They taught me a lot of things in the ring. As I went along, I realized a lot more about psychology, about where to do things, and what not to do.”

In particular, Matt Striker was excellent at articulating what to do and when. “He was really good with helping me understand why I should do something, why I shouldn’t, what the fans want to see, what makes the fans get into your match and want to see it. You can put your match together in the back all you want, but when you walk out in front of a crowd, you’re there to entertain the crowd. One thing that I learned the most of out Striker was that you need to know how to make that crowd react to you — and if you do that, then you’ve done your job.” 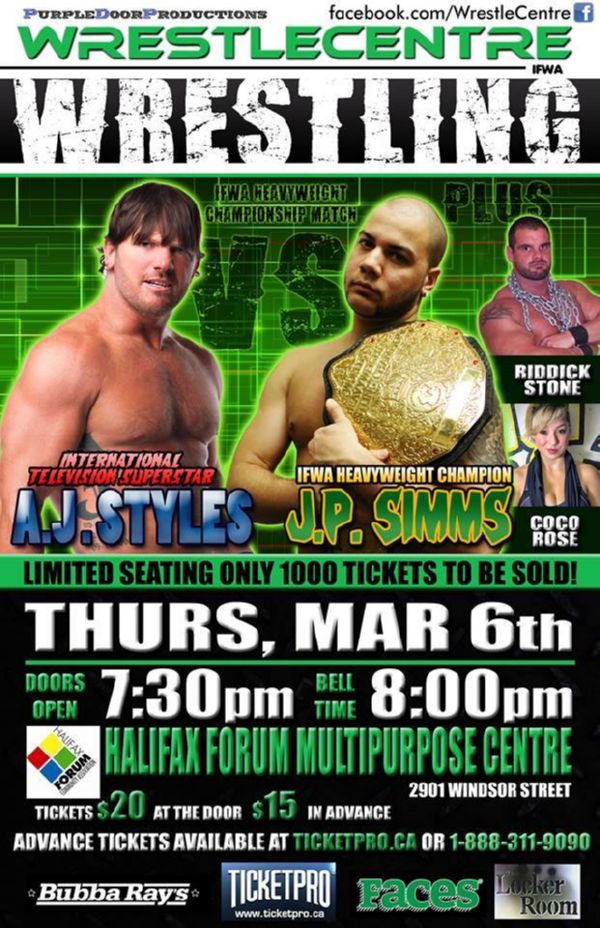 Backstage before their bout, Striker told Simms that if they did their job, the fans would pop at a particular moment. “We did that in the match, exactly where we said in the back that the crowd should pop, the crowd popped. That was a huge learning experience for me, because I realized that I took that confidence to a whole new level.”

He also gained the confidence of the WrestleCentre promotion, who brought the bout with Styles to Simms. “The promoter pitched it to me. They gave me a call a couple of weeks ago and let me know that there was a big show coming up and that they had a few names in mind. They told me, ‘It’s not 100% yet, but we’ve got you working AJ Styles.’ I was like, ‘Sweet.'”

“When we heard the news that AJ Styles was a free agent we immediately took advantage of the opportunity to bring in the best in-ring performer in the business today. It’s very rare that an independent company is able to bring in someone of AJ’s calibre, much less in his prime,” said WrestleCentre writer/producer Tyler Burns. “We felt he would be a perfect fit to compete with our Heavyweight Champion JP Simms, who is universally considered the top performer in Eastern Canada. Interestingly enough they’ll be competing in the same venue where Randy Savage wrestled for years just before being signed by the WWF. We’re hoping this match provides the spotlight necessary in order to propel JP into a similar opportunity.”

Simms is concentrating on improving himself for the bout with Styles.

If everything goes according to plan, the bout with Styles gets the name of JP Simms out there further.

“I’ve talked to other bookers, but nothing set in stone yet,” he concluded. “Before 2014 is over, I will have wrestled outside of Nova Scotia, guaranteed.”