In recent years, women’s independent wrestling has developed a passionate following in the U.S. and Canada, thanks largely to promotions like SHIMMER (based in Berwyn, Illinois), SHINE (Ybor City, Florida), NCW Femmes Fatales (Montreal, Quebec), and Women Superstars Uncensored (Voorhees, New Jersey), among others.

Former SHIMMER champion Saraya Knight (the mother of WWE NXT women’s champion Paige) is working to build up women’s wrestling in the United Kingdom. Along with her husband, the recently-retired “Rowdy” Ricky Knight, Saraya has built Bellatrix Female Warriors, a women-only promotion based in Norwich, England. 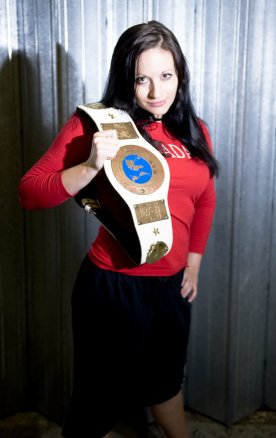 Featuring a mix of homegrown talents trained in the Knights’ school, as well as an assortment of formidable international talent, Bellatrix is cultivating a dedicated international fan base.

The company’s next event, Bellatrix 8, will take place on Sunday, March 2, and will be available on video-on-demand.

The event features a unique 30-woman Royal Rumble-style battle royal (an idea Saraya credits to Ricky), as well as four championship matches. Winnipeg’s Courtney Rush will defend the Bellatrix World title against Liberty; Sammi Baynes (a former tag team partner of Paige, back when she competed as Britani Knight) defends the European title against veteran Blue Nikita of Greece; Erin Angel will defend the British title against Violet O’Hara; and Saraya will defend her newly-won Australian IndyGurlz title against the up-and-coming Penelope.

In a testament to the work of the Knights as trainers and promoters, Saraya said the European fans see the local talent as being on par with those top names imported from North America.

“I don’t know if the European fans just prefer seeing the European girls, but our fans are just as into the matches featuring local talent as they are seeing the girls from outside,” Saraya said.

Rush said visiting talent has to prove themselves to win over the Bellatrix fan base.

“It is the import’s job to prove to the crowd why they are worth being put on the show over a local girl who lost their spot to make room for them,” Rush said. “The crowd is a wrestling crowd that responds to good wrestling. They may be backing Liberty, but when I finally get the opportunity to show what Courtney Rush is all about in the U.K. ring, they will demand to see me again.”

Saraya and Rick have had a hand in training many of the women on the Bellatrix roster, as well as most of the male wrestlers in WAW, which ran more than 100 shows last year. Knight says there are more than 100 students currently affiliated with the WAW Wrestling Academy, including some students as young as six years old. These students learn the fundamentals, with a heavy emphasis on the traditional British catch-as-catch-can style.

This is one of the major ways Bellatrix differs from the popular U.S. and Canadian women’s promotions.

“(Our girls) are brought in the old school way. I like my girls to beat the crap out of each other,” Saraya said. “Some other promotions do a lot of the flashy, flippy stuff. I prefer the grappling, the short-arm combat, the toe-to-toe conflict. I believe the girls should go in the ring and respect the craft. We train our girls so they can go out there with anyone.”

Saraya credits her husband a large part of the success of Bellatrix.

“He’s a brilliant story writer. He watches everything as a spectator, and then comes back to me with his feedback and ideas,” Saraya said. “I don’t think that Bellatrix would be Bellatrix without Rick overseeing the mechanics of the show.”

The 30-woman battle royal promises to be an interesting bout, with the winner of the match receiving a title match against the European champion in June. The match will feature some of Bellatrix’ top names, including Destiny, Amy Lee Kramer, Skarlett, and Miss Mina. For first-time Bellatrix viewers, it promises to be a “Who’s Who” of rising European stars … some of whom could very well follow in the footsteps of Paige and make an impact in U.S. in the not-too-distant future.

Paige’s success in WWE has had a ripple effect in Bellatrix and WAW.

“When she got signed, there was a huge wave of interest, and enrollment at the academy skyrocketed,” Rick said. “Because she has done it, people realize that it can be done, and more people signed up to learn to wrestle.”