TNA’s roster is often a roller coaster. Week by week, a change in the landscape could happen suddenly and see a new star emerge out of it all. This is exemplified as of late when you see the TNA World Heavyweight Champion Magnus, who has taken the space in the limelight with the departure of A.J. Styles. However, whether casual or consistent viewer, there are some constant sources of entertainment within the company. The technique and trash talk of Bobby Roode, the boozing and brawling of “Cowboy” James Storm, and the silence and strength of Samoa Joe are near guarantees each week on the company’s weekly Impact television show or pay-per-views. 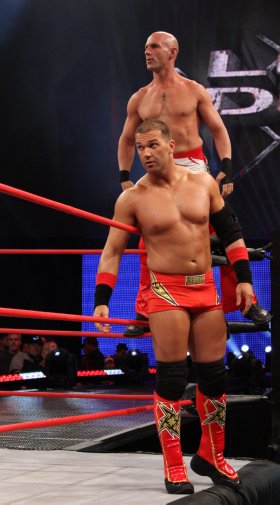 For many, there is one tandem that stands above the rest. Bad Influence, comprised of TNA mainstays Frankie Kazarian and Christopher Daniels, bring the jeers and the jokes each week. Though smaller in stature compared to the prototypical professional wrestler, these two are far from the “vanilla midgets” often associated with more diminutive grapplers. Equal parts in-ring prowess and gifted gabbers, Bad Influence can most certainly be guaranteed to be a high part of any TNA product they may be featured on.

The two’s tag team savvy will be tested in the pay-per-view, TNA One Night Only: Tag Team Tournament, starting to air on January 3rd, though it was taped back in March 2013. Prior to their tournament tangle, the two stopped to discuss how they came to be on a conference call.

“We’re not two guys who were just thrown together as a team. We were both two very accomplished singles wrestlers who had accomplished different things,” Frankie Kazarian stated. “It wasn’t, ‘Let’s see what’s gonna work,’ it was, ‘This is gonna work’ because of the chemistry we had being friends, first of all, and in the ring. We knew we were gonna hit a home run and in the last few years, we’ve done just that.” 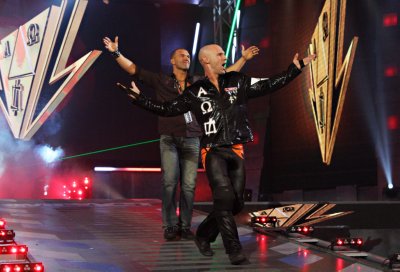 The always-humble Bad Influence walk down the ramp.

Being a team with so much expertise in so many facets of the game, it is clear that Bad Influence have taken from many to build a style of their own. “As far as influences on us, with me growing up in the Carolinas watching teams like The Rock ‘n’ Roll Express and The Midnight Express and Frankie growing up in Massachusetts and California, watching WWF and teams like The British Bulldogs and The Hart Foundation, these are all teams that inspired us and teams that we had in mind when we put together our presentation for Bad Influence,” Christopher Daniels revealed when asked about some of the teams of old the duo looks up to. “This is something we decided to do because we felt we could make an impact and become a team like Beer Money, the Motor City Machine Guns, or America’s Most Wanted.”

The duo play a very brash, cocky team with a penchant for comedy and methodical tag generalship. Though many are polar opposites of who they play in the ring when the cameras are on, this duo certainly does not lack confidence in their abilities.

Kazarian echoed a similar tone of certainty when talking about their contributions to the modern tag team wrestling scene. “Tag team wrestling has been called the lost art. Well, Chris and I have been working very, very hard to bring that back to the forefront and do our best at it.” 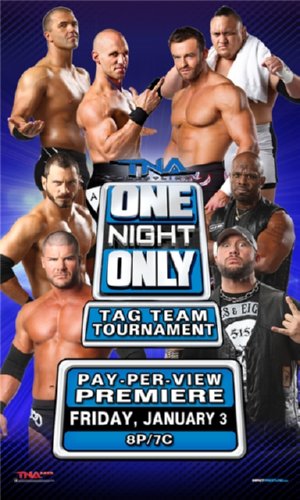 The mark of a true competitor is often times defined by the constant need for evolution in the game. Contentment leads to complacency and the game can pass the player by. The best of the best are always looking for the edge to improve to leave their names in the record books. For this team, it is apparent that, despite the name, there is nothing but good influences between the two. The group closed by defining what their partner does to keep them moving to the best of their abilities.

“Keeping up with Christopher Daniels keeps me up on my toes. I have to stay sharp as an axe,” Kazarian said in praise of his tag partner. “He’s quick. He’s brilliant when it comes to promos, to anything! I think I have proven a lot in the past couple of years keeping up with Chris Daniels.”

Daniels remarked how Kazarian keeps him ring-ready to take on any opposition the team may encounter. “One of the things Frankie does is push me to be ready when it comes to the physical portion. Whenever we’re on the road and I feel I could sleep in, Frankie’s right there pushing me because I know he’s gonna wanna workout and eat right. The things that keep your body working right as a professional wrestler, Frankie’s an expert at it.”

The team aims to continue to build their legacy and put their bond to the test during TNA One Night Stand: Tag Team Tournament, which debuts January 3rd on multiple pay-per-view providers.