In a real holiday treat, two veterans of SLAM! Wrestling got the chance to bring their young sons to their first-ever WWE live events, one in Detroit and one in Toronto. What was it like? Who was over? How come a seven-year-old knows the word “heel”? Read on!

Nick Tylwalk has been writing for SLAM! Wrestling for a dozen years, primarily covering the TV shows and PPVs. The Tylwalk family lives in Hershey, Penn., but over Christmas were in Detroit. Conveniently, WWE ran a house show at Detroit’s Joe Louis Arena on Saturday, December 28, and Nick got a chance to bring JT, age five, to his first-ever WWE show.

FROM NICK AND JT:

As background, JT had never seen WWE in person or on TV, and his only awareness of it was from toys and video games. His favorite wrestler is John Cena, who was not on the Detroit card, and the only other guys he knew for sure prior to last week were CM Punk, Rey Mysterio and Undertaker. His mom told him he would not be allowed to watch wrestling until he was eight due to the lateness of the shows (his bedtime is 8 pm) and some objectionable content, but she allowed him to go to the house show because she knew there would be few if any promos or backstage segments.

Here’s what JT had to say:

I liked seeing “The Show-Off” Dolph Ziggler and Daniel Bryan. I also liked seeing the two guys versus two match (the Prime Time Players versus The Miz and Kofi Kingston).

For Mark Henry versus Fandango, I really wanted it to be a wrestling match. But I liked the dance for Henry, and it was awesome that he did both.

Note from Nick: the crowd got to vote using text/Twitter on whether Henry-Fandango would be a dance off or a match. Dance off won, Fandango got mad and attacked Henry when he did some moves to the instrumental from Michael Jackson’s “Billy Jean,” but Henry dispatched him with a World’s Strongest Slam.

I liked looking at the John Cena necklace, which dad bought for me because there were no t-shirts left in my size. I was a little bit disappointed that Cena didn’t wrestle.

There was a guy that was in a match with the guy with big muscles (Big E Langston) who said “What’s up? What’s up?” The chants were fun; I didn’t know any of them except to boo because I do that in other sports. I liked saying “Yes! Yes!” and “What’s up?”

Also in the three-person match (actually three people on each team), every time Daniel Bryan punched the bad guy we cheered and when he got punched we booed. I liked when they wrestled outside of the ring, especially when one of the Usos put his arm over the head of one of the other guys and slammed him down.

The Red Wings are my favorite hockey team (I also like the Sharks too), so it was fun being in the same arena where they play.

I want to go see wrestling again, but maybe not until I’m eight since the first match was a little bit scary because of the big guy (Ryback). 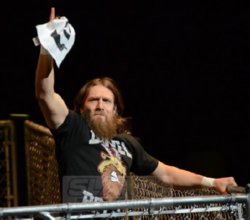 Have you heard? Daniel Bryan was pretty over in 2013. Photo by Brad McFarlin

Greg Oliver is one of SLAM! Wrestling’s founders and has been writing about pro wrestling for over 25 years. His son, Quinn, has met a bunch of wrestlers at fan fests and reunions, and been to a couple of indy shows around Toronto, but usually only for a couple of matches. His favourite wrestler has always been Brent Banks of the Toronto indy scene. Most of what he knows about WWE comes from an old Smackdown vs. Raw 2008 game we inherited for the Wii, though he is quite aware of the books that Greg has written on pro wrestling. The WWE presented a show on Monday, December 30th, a rare show on the same night as Monday Night Raw, at Toronto’s Ricoh Coliseum. 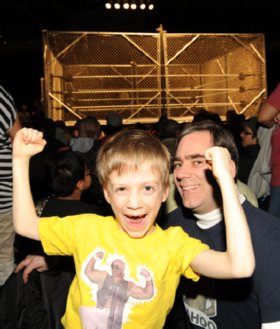 Quinn Oliver shows off his Superstar Billy Graham t-shirt at the WWE show in Toronto on December 30th. Photo by Mike Mastrandrea

FROM GREG AND QUINN:

We got there just as the show was about to begin. Up first, Sin Cara beat Alberto Del Rio. “I love the wrestling outside the ring,” said Quinn. After ADR was rolled up into a small package for Sin Cara’s win, Quinn asked, “Is that all?”

The Fans’ Choice was between AJ Lee and Natalya, and the choices were a dance-off or a Divas title match. Thankfully, the bout won out (81%!) but A.J. refused to put the title on the line. (As an aside, I don’t even own a cell phone, so apparently my vote isn’t important.) Quinn started booing A.J. quickly. “Why don’t you like her?” I ask. “Because she’s the heel.” Nattie won with the Sharpshooter.

I told Quinn that Ryback against Zack Ryder wouldn’t last long, but it went on longer than I thought it would, with Ryback winning. On Ryback: “He’s obviously the heel because he didn’t shake hands.” Reflections on the action: “All they’re doing is jawing and chasing each other” … “He hit his weenie!” on a missed splash … “Wrestlers must get 30 bruises every time.”

While the cage match for Big Show versus Kane was set-up, we zipped to the other side of the arena for our photoshoot with SLAM! Wrestling photographer Mike Mastrandrea. Everyone should have a friend who is a professional photographer!

As the cage match started, with Christian as the special referee, Quinn noted the simplicity of the cage, which shook with ease given the size of the combatants: “I’d prefer Hell in a Cell. That would be awesomer.” Some more notes: “Steel in the face! Wow!” … “The cage is almost being destroyed!” … “I can’t believe no one’s esecaped the cage yet. This might go on forever.” (No son, that’s what any match with Big Show or Kane feels like.) … “Ha! Ha! He knocked down the referee!” The ref bump actually lead to the finish, with Christian nailing Kane after, and Big Show following up for the win. 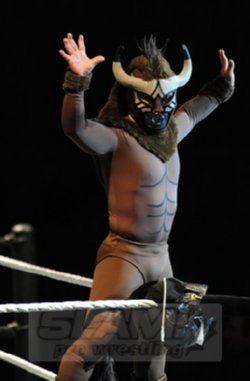 After the intermission, Vickie Guerrero introduced 3MB as the Mounties, which included Ricardo Rodriguez replacing Heath Slater. Rodriguez wore the Mountie outfit for the whole match, unlike Jinder Mahal and Drew McIntrye. They lost to Los Matadores. Naturally, El Torito was a big hit. “Why does the bull keep trying to come into the ring,” Quinn asked, not realizing the mini was a wrestler too. “I love the bull … that bull is so great.”

The best actual wrestling match of the night was WWE tag champion Cody Rhodes pinned Antonio Cesaro, with Goldust and Zeb Colter in their respective corners. We had a discussion of what the ring is made of, and then Quinn got really into it, with his first real genuine pops that spontaneously matched that of the other fans, like he was starting to feel the rhythm.

By the time of the main event, Quinn was starting to feel a little rundown; maybe it was the six hockey games in three days at the local rink over the previous three days. That lead to the comment, “There’s nothing fun about this. All you do it watch. I’m bored.” Yet he never took his eyes from the ring during the WWE World title defence by champ Randy Orton against John Cena. By far, Cena got the biggest pop of anyone at the show, and his merchandise was everywhere, especially with the tons and tons of kids at the show. Quinn enjoyed the chanting by the fans, though amended “Let’s go Cena! Cena sucks!” to “Let’s go Cena! Orton sucks!” and did ask the very logical question about Cena: “Why’s he wearing his running shoes?”

Knowing that Orton wasn’t going to lose, I made a bet with Quinn — 50 cents that Orton wouldn’t lose the title, and he took Cena to win. In the end, there was a lot of explaining to do, as Orton low-blowed Cena in front of the referee to earn the disqualification. What’s a disqualification? Why did he do that? We eventually concluded that the bet was a draw, since there was no clear-cut winner.

WWE comes back with another show in April, and I could see us going again, but I think he would get really, really bored and fidgety at a TV taping.