Johnny Gargano is all class

When you have been the champion for over 750 days some people might think you would get a big head. Others might say that you are egotistical or self-absorbed. These sentiments couldn’t be further from the truth. DragonGate USA’s Open the Freedom Gate Champion, Johnny Gargano, is a humble man who considers himself an equal to the fans and those fans are the people to drive him to succeed. 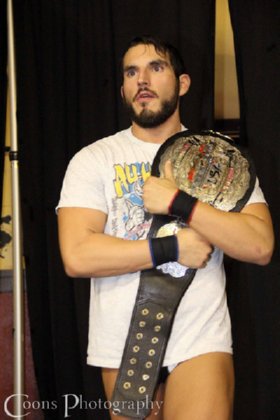 Johnny Gargano beams with pride when he talks about his DGUSA title. “I am the first American to ever win the title.” When he thought about where he started in wrestling to where he is today, he should be proud.

DGUSA executive Gabe Sapolsky feels that “Johnny has completely grown into the role of a champion. He has excelled outside the ring, doing all media that is requested, interacting with the fans, and being a face of the company we are proud of.” He went on to say that Gargano “has put DGUSA and EVOLVE on his back with one big money match after another. He knows the pressure is on him to produce as the main event and champion. He has thrived under that pressure and has grown into a true main eventer.”

“My dad owned a catering business and one day he allowed a wrestling company to put on a show in the parking lot,” stated Gargano. He was allowed to enter the ring and played around a little bit. “I used to make my own matches with my buddy and I thought they were awesome!”

At the age of 16 he entered Cleveland All Pro Wrestling Training Centre. “My family was cool with it,” said Gargano. “They were amazed that as I got better I was able to go to England, Germany and Japan to wrestle. They are very proud.”

What really opened his parents eyes to the possibility that he could become successful was when he was able to show his parents a wrestling magazine with his photo inside. “When they saw that picture it was a big deal. Wow I am in a magazine!” said Gargano.

“I am your hero!” is Johnny Gargano’s trademark catchphrase. When asked who his hero is he solemnly reflected and stated that his parents are his role models. “I don’t drink, smoke or do drugs and that comes from their influence,” said Gargano. “I don’t want to let them down.”

Gargano and his parents give back to the community twice a year. “We make Thanksgiving and Christmas dinners for steel workers who have to work on the holidays,” said Gargano. “We serve over 600 dinners on each holiday.”

On the wrestling side of things Gargano knows that the locker room in Dragon Gate USA is talented and looking to unseat the champ. He lists Ricochet, AR Fox and Rich Swann as amazing competitors who are in the title hunt.

Recently, Gargano wrestled on a show for Hamilton, Ontario-based Alpha 1 Wrestling. Promoter Julian Micevski raved about him. “The crowd loved his interaction. He delivered in the ring.” Gargano also impressed the fans, a majority of whom had not seen him wrestle before. “He stole the show,” continued Micevski. “The fans appreciated him and so did we as a company.”

Sapolsky feels that Gargano is genuine. “It does mean something to him to be there for a kid who is battling a disease or a fan who he has inspired. It’s not just something he does to do it or for credit, but it’s something that deep down really means something to him. That’s what makes him a class act and a positive force in our locker room.”

While his wrestling character is, in his own words, “slightly delusional,” he has noticed an evolution in his in-ring behaviour. “I started off as a goofy, immature character years ago,” said Gargano. “Over time I became more serious. The title focused me but it corrupted my character. He started to think that he is everyone’s hero.”

Johnny Gargano’s character in wrestling might be over the top and have a big ego, but not the man. Gargano is all class and he is sure to make his family proud.