In conversation on Thursday, WWE star Curtis Axel was downright thoughtful, considering his career progression and his tactics for improving at his craft. Until he remembered who he was.

“To be honest with you, I’m absolutely perfect,” he said, very much the braggart son of “Mr. Perfect” Curt Hennig. 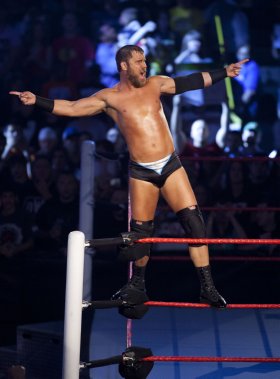 Perhaps he has earned the right to be a braggart, with his successful run as Intercontinental champion in the books, and the associated rub by being a Paul Heyman guy.

But before he was Curtis Axel — or even Michael McGullicutty — he was Joe Henning, trainee at Harley Race’s school in Eldon, Missouri.

“I was only there for year, but the thing is that I’ve really changed over the last six and a half years. Crazy, big-time progression. I would never take away what I learned from Harley,” he said. “I’m really glad I went there because the fundamental, technical wrestling skills and just the basic knowledge that you learn there, that’s helped me a lot. That’s all we would do, repetitive basic training, cardio was a big thing too. I’m really glad I went there. It was really hard living there, but it humbled you up. It made you appreciate this business a lot more. I tell young guys coming up, they’ll Tweet me and ask me, ‘Where do I go, where do I start?’ and I tell them, ‘Check out Harley Race’s school down there in Eldon, Missouri.’ Like I said, it humbles you up. There’s guys coming in developmental right now that just, they really don’t know. They have such an awesome performance center now, and they kind of take that for granted, I think.”

Most fans know about his family history, but probably not all of it. His grandfather is pro wrestler Larry “The Ax” Hennig, and his father is “Mr. Perfect,” and both are members of the George Tragos/Lou Thesz Professional Wrestling Hall of Fame. But Joe’s sister, Amy, wrestled for a while too, learning from The Ax’s old tag team partner, “Handsome” Harley. However, circumstances changed for Amy, and she’s back in Minnesota now, wrestling behind her. “She got engaged and actually just had a baby boy, who just turned one. Nah, she’s done,” said her brother.

Hennig took what he learned from Race — debuting in the summer of 2007 — and added to it in WWE developmental.

He explained some of what he does to keep improving.

“I’m constantly watching tape. It’ll be a different guy that I’ll watch for maybe a couple of weeks, dig up old stuff on YouTube and look at old DVDs and tapes that I have. I’ll just study one guy for a while, and look at different moves and finishers, different finishes to matches, and all that kind of stuff,” he said.

In person, Hennig is not afraid to seek out knowledge either. “I’m constantly picking guys’ brains, the producers, Arn Anderson and Fit Finlay, Road Dogg, I’m picking older guys’ brains,” he said. “In every match, there’s something that I could have done different or do something cooler with what I did in that match. It’s a constant learning process.”

Having Paul Heyman as his manager was a huge boon.

“I rode up and down the road with him the whole time that we were together,” explained Hennig. “Not only the stories that you hear, but the knowledge not only of in-ring stuff, but outside the ring stuff, when it comes to financial stuff, just dealing with the business part of this industry. The guy’s a wealth of knowledge, man. I was so happy to get put with him. Just picking his brain, he’s a genius. He’s a cool dude, he’s a friend of mine, and I also gained that friendship from him. He’s an awesome guy and a very, very smart person.”

The road can be a grind too, but Axel has gotten more used to it.

“It’s a lot easier now. You get a system down,” he said. “I don’t know where I am half the time. I get off the plane here in Minnesota and I go down to the baggage claim. I look at the screen there that shows what claim I’m at, and I can’t even remember what city I just came from, so it takes me a couple of minutes to figure it out. ‘Okay, I came from Chicago’ so you’ve got to find where your bag is.”

He finds it hard to picture what it was like when the older Hennigs were on the road, working the territories. “Can you imagine? Now we have GPS and all that kind of stuff. It’s unbelievable what we have nowadays. They were living off maps and just pulling up to hotels. Now we have Hotwire and stuff where you can find the best deals and you don’t have to go hotel to hotel.” 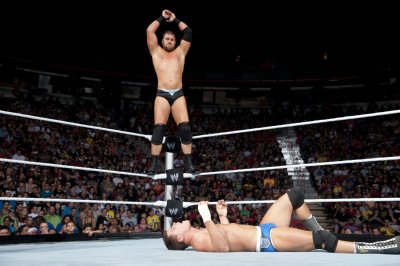 Axel’s Intercontinental title win was in June, at Payback, not long after he was repackaged from Michael McGillicutty to Curtis Axel. Big E Langston ended that reign on the November 18th Monday Night Raw.

Unlike the Hennig legacy, Langston is relatively inexperienced, a powerlifter turned wrestler who started in 2009.

“Big E, he’s an athletic guy and he caught on pretty quick,” said Axel. “As I went up to the main roster, I’d still go down there to NXT, and I’d watch him. His improvement was awesome. … He’s got a great future ahead of him considering what he’s done in a short period of time. I don’t have any problem working with him.”

Saturday in Vancouver, B.C., it’s Curtis Axel versus Langston and R-Truth in a three-way dance for the Intercontinental belt.

The three-way matches are fun, said Axel. “You get to do all kinds of different things. I’m working with two guys there that I enjoy working with. I’m going to bring the fight to them and they’re going to have their work cut out for them. I’ve got to get that Intercontinental championship back.”

The TLC pay-per-view next weekend, though, has Langston defending the Intercontinental title against Damien Sandow. Axel can be patient. “It’ll come back around, you’ll see. If Sandow gets it, I’m going to go after him,” he said, adding that teaming with Ryback in a tag team qualifying match for a fatal four way tag team match, which might be at Raw or TLC, is on the plate too. “I’m kind of focusing on that right now, but down the line, I’d like to get the Intercontinental championship back just because it meant so much to me.”

Greg Oliver was actually at the debut match of Joe Hennig, July 13, 2007, in Waterloo, Iowa, for World League Wrestling (WLW), where he teamed with Ted DiBiase, Jr. against Dinn T. Moore and Branden Tatum.