Most WWE fans don’t know how the wrestling they watch came to be, or even that the company that produces it has been around since the 1960s. WWE Home Video gives fans a look through time with The History of WWE: 50 Years of Sports Entertainment. The two disc set features a two-hour documentary covering the history of WWE/WWF/WWWF and 14 historic events from the company’s 50-year history. The Blu-Ray adds half a dozen anecdotes and two extra matches as bonus features. 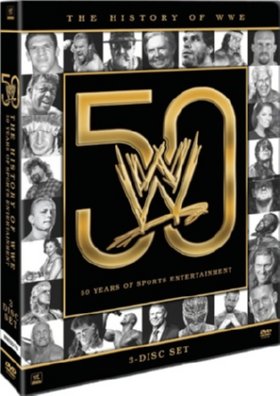 The two-hour documentary turns back the hands of time to before 1963, chronicling the rise of the global entertainment brand. Footage from the past is interspersed with stories from wrestlers, celebrities, WWE employees and even super fans.

It all starts with Vince McMahon Sr.’s Capitol Wrestling Corporation in the late 1950s and his vision to unite the various wrestling territories throughout the country. And of course, having Hall of Famer Bruno Sammartino as your champion helped to push McMahon’s product. The program follows the rise of WWF with the advent of cable, the success of Wrestlemania, and Vince McMahon buying out the company from his father.

The documentary does cover some of the low points and tragic events of WWE history. Vince McMahon’s steroid trial and acquittal is covered, and is actually spun into a positive. The money spent on the trial caused cutbacks in WWE and high-priced talent walked away, but this paved the way for new talent, like Bret Hart and Stone Cold Steve Austin to enter the spotlight.

Owen Hart’s death during a live pay-per-view is also given time, with several members of the WWE family paying tribute to the fallen superstar. Unfortunately, this is the only death that is mentioned. Not to belittle the tragedy that occurred in Kansas City, several other superstars passed away while on the WWE roster — most notably Eddie Guerrero and Chris Benoit.

As much as WWE has tried to scrub Benoit from the pages of history, this was an event that should not have gone without mention. What Benoit did was despicable, but it did affect the company. It was the only time in the history of RAW where a show was cancelled and forced changes to the WWE product. Superstars no longer take chair shots to the head. It may have been a black day in WWE history, but it still happened.

The last half hour the documentary suffers from lots of self congratulatory segments about how great WWE is and everything they have done. The quick history of the WWE Hall of Fame was nice, though.

The second disc is the home to 14 significant events from WWE history. If you asked 100 fans to pick 14 events from WWE history, you’ll get 14 different lists. One of the most interesting choices is the Hulk Hogan versus Andre the Giant match at Wrestlemania III, but it is from the arena camera and doesn’t have any commentary, very cool. You will also find the first Royal Rumble, Koko B. Ware versus Yokozuna at the first Monday Night RAW, the birth of Austin 3:16, the Montreal Screwjob, the purchase of WCW, and CM Punk’s “pipe bomb” promo from 2011. The only head scratcher is the inclusion of the Number One Contenders match between John Cena and CM Punk for the right to take on The Rock at Wrestlemania 29.

While being very informative and entertaining, there isn’t much replay value in the documentary. And while the it’s nice to have all these iconic moments from WWE history in one place, it makes you wish there were even more matches and moments to watch. Maybe WWE is holding back for a volume two.