Second volume of ECW Unreleased more of the same

There will never be another ECW.

That can be construed as a good thing and a bad thing.

The positive in that anything trying to replicate the good ol’ days in the South Philly bingo hall will not suffice. The negative is that anyone who yearns for those times will ultimately be let down. 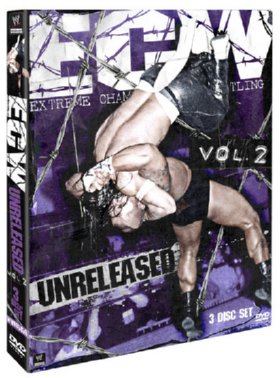 Then again, with WWE’s release recently of ECW Unreleased: Vol. 2, us fans of the glory days of ECW can re-live the past.

This three-disc set, much like ECW Unreleased: Vol. 1, is simply phenomenal. And what makes it that way is that ECW was such a unique entity that any match the company put on, a diehard fan was hooked and never saw it as a curtain-jerker or a main event. They were all must-see matches.

In Vol. 2, we get a special treat as the first-ever ECW match (well, Eastern Championship Wrestling match) from Oct. 19, 1993 (wow, has it really been 20 years?!?) between Tommy Dreamer and the Tazmaniac. Yeah, the Tazz. Both of these guys look so young and well, it was 1993!

In all, the 7-1/2 hours of ECW legends on these three DVDs contains other names such as Lance Storm, Chris Candido, Shane Douglas, Rob Van Dam, The Sandman, The Dudleys, The Gangstas, Al Snow, Sabu, Chris Jericho, Cactus Jack and Terry Funk.

Notably absent is one Chris Benoit, but that’s a whole other story and rant from this writer.

There are more than 20 matches included in this set, hosted by Dreamer and Joey Styles, and that pair has some awesome chemistry. They get to the point, they take you back to the Land of Extreme and really make you feel like you were there.

The match between Jericho and Sabu from August 1996 can be seen by some as a spot-fest, which it is, and by others as a classic ECW bout. I tend to look at it as a match when both were more agile and younger and able to produce high-quality matches that some back then never saw and only knew these guys from their later WWE days.

And I’m pretty sure Sabu would like to forget his WWE days. Jericho did pretty well for himself, but Sabu, eh. Maybe WrestleMania 23 was a highlight, but that’s pretty much it, in my opinion.

ECW Unreleased: Vol. 2 also has a cool little piece on Mikey Whipwreck and his rise to the top of ECW. I can remember watching ECW back when I was probably 15 or 16 and seeing a video of Whipwreck set to Beck’s “Loser” tune. Man, am I old.

Then again, that’s what this DVD set does for wrestling junkies like me — helps us hearken back to when life was simpler and ECW had that feeling of “Whoa!” We didn’t care about the politics of wrestling — we just wanted to watch ECW to see what would happen next and if we would cringe or not.

Of course, aside from all the hardcore wrestling that is non-existent these days, we also get the high-flyers on this set. Just see Disc 3 and the three-way dance between Yoshihiro Tajiri, Jerry Lynn and Super Crazy from November to Remember 1999.

The “End of an Era” segment at the end of the set hits home as no matter how much you read or watch about how the promotion ended, it always hurts as a fan. Why? Because now we either watch the debacle known as TNA or try and take in the all-new version of WWE.

Yes, Virginia, there may be a Santa Claus, but there will never be another ECW.

Pick up ECW Unreleased: Vol. 2, though, and you can instead go back a few years and take in the original hardcore breed of wrestlers who made you gasp, groan and cheer.