It’s a changing world for kids and wrestling books. Where once librarians would laugh at a youngster wanting a book or magazine on the dark world of professional wrestling, a new series from Capstone Press celebrates eight wrestling stars in engaging, entertaining biographies aimed at elementary school readers. 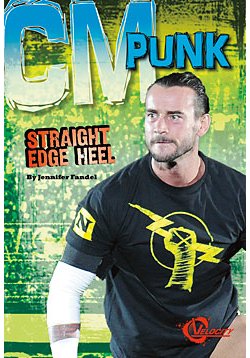 The series is called Pro Wrestling Stars and published under Capstone’s Velocity stamp, but that’s beside the point as they aren’t exactly in your local bookstore.

Instead, the books are aimed at public libraries (where I found six of the eight to review) and school libraries. As such, they are expensive, but very well done, both in the quality of the paper and binding.

In the world of kids learning to read, they are pegged as Reading Levels 3-4, meaning that children at that level should be able to read the books themselves, and any complicated or unusual words are explained in glossary entries both on the pages and in a glossary at the back of the book.

Bursting with colour photos and funky designs, each page has multiple places to draw your attention.

Design-wise, it is also important to explain that the factoid-like prose is pretty common to kids non-fiction books these days, with bullet points — and in the case of the Randy Orton book, a dartboard! — used for short bites of information. Book to book, the designers have smartly kept things different in everything from the graphics to the graphs.

An interesting aside is that so many of these books were written by women. Personally, I’d love to see more high-profile female writers on wrestling websites, including this one (apply to the email above!)

Finally, before getting to quick looks at each of the books I read, I want to credit Mike Johnson of PWInsider.com for his consulting work on the series. I found no serious flaws, which is a testament to his work as much as it is to the variety of authors charged with capturing the careers of so many different wrestlers.

So, what did I find?

This was the book I left to last, as I was most interested in a kids-level view of CM Punk and his Straight Edge lifestyle. Fortunately, that was a big part of the book, including information about steroids and what they do to bodies. His tattoos were explained, which was neat. The author chose to play up the “Triple Crown” of Punk, meaning three major WWE titles, and even included a list; I find these attempts to compare pro wrestling to legit sports lists somewhat comical. The biggest flaw — a whole book on CM Punk and not one mention of Samoa Joe; their feud really put each other on the map. His entire TNA run is ignored as well.

I don’t see Cena as a rapper any longer, so this book is almost a throwback, and addresses that part of his career more than the “Hustle, Respect, Loyalty” player we have today. There is nothing about the boos that he gets either. Still, it’s a very good recapping of who John Cena is, and how he got there — and not ignoring the importance of his father’s love of pro wrestling and subsequent own career, and the learning territories of UPW in California and OVW.

Angle’s story is easily the most comprehensible by the mainstream, an American Dream if you weeeell, with the hard work and dedication paying off to become an Olympic gold medalist. I learned a lot about his family, and the idea that he gave his medal to his mother will mean something to kids. The rest is a straightforward run through his WWE and TNA career, and it doesn’t shy away from his injuries. The book does not, however, address his issues with painkillers and frequent DWIs. And I had to laugh when the author tried to quantify the number of matches Angle has had: 331 wins, 256 losses, 4 draws as of 2011.

While I was pleased the book acknowledges Orton’s lineage, including his oft-neglected uncle Barry O, there are no photos of them at all — but there is a photo of Orton’s wife (and they are since divorced). But hey, all of his tattoos are explained which was surprisingly revealing. Orton has a bit of a numbing effect on me when he’s on TV, so it should not be a surprise that I had forgotten about his managers, including Stacy Keibler and Lita. Oh well.

Triple H: At the Top of His Game  by Sandy Donovan

Going in, I wanted to know whether his relationship with Stephanie McMahon would be acknowledged, and it was, including the dates for their wedding and the births of their three daughters. His behind-the-scenes power is not the gist of this book, though, which goes from his early days in WCW as Terra Rizing and Jean Paul Levesque, to the rise through WWE. Even the Kliq and his subsequent punishment for breaking kayfabe at the goodbye to Scott Hall and Kevin Nash makes the book.

Undertaker: Life of the Dead Man by Pamela Dell

Of all the titles, this one has the trickiest line, writing about a long-time gimmick. It works. The author explains what a gimmick is, how it evolved over time, and why it works. Though Paul Bearer’s role in the Undertaker story is unfortunately underplayed, the rest is fine, listing his feuds and friends, his moves, and his WrestleMania streak. I did learn a little about the man, Mark Calaway, including details on his three marriages and his kids (though his daughter with Michelle McCool had not been born when it was published). Rey Mysterio: High-Flying Luchador and Chris Jericho: Best in the World complete the series. I did not get to read them yet, but if the other titles in this series are any indication, they should be fine too.