It’s not often that a book starts out in French, gets translated and published in English, and then a French publisher gets on board to print it, nearly a year after it came out. 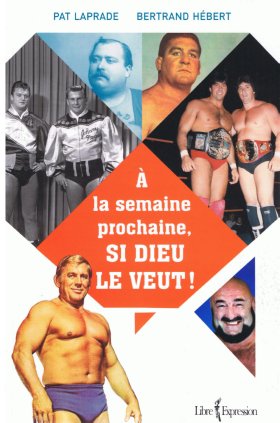 But then À la semaine prochaine, si Dieu le veut! is not your average book.

Written by occasional SLAM! Wrestling contributors Pat Laprade and Bertrand Hébert, and published early in 2013 by ECW Press as Mad Dogs, Midgets and Screw Jobs: The Untold Story of how Montreal Shaped the World of Wrestling, the latest version, which just came out, means a little vindication for the authors.

“Finally, we got through to them!” laughed Laprade. “The media attention we got locally for an English book finally opened their eyes that this project could be a profitable venture.”

Libre expression is the publisher in Quebec (and is owned by Quebecor, which also owns Canoe.ca), and the title is in reference to the phrase that Edouard Carpentier signed off TV shows with when he was a commentator in the 1980s and 1990s.

What differences will readers find between the English and French versions?

“First off, we changed around 50% of the pictures about a 100 brand new unseen shots. We were also able to update many bios with brand new interviews we conducted since the release of Mad Dogs, Midgets and Screw Jobs,” said Hébert. “We also added a lot of text that didn’t make the cut in the English book as they were too specific to wrestling within the province of Quebec, like the lightweight era, starring the Lorties and the Dufresnes.” As well, there is a new section on Montreal Alouettes football players turned wrestlers and the wrestling memories of Quebec celebrities.”But the biggest change is that the book will now be accessible to everyone in the province since not everyone could read the first book,” said Laprade.

Indeed the Quebec market is unique, and not just because of the French language.

“There is more to it,” confirmed Laprade. “Local news is very popular here — people want to know what is going on in Quebec. So it’s much easier to get access to the major news outlet than anywhere else. Sports nostalgia is very popular in the media, so the book was unique and right in that target.”

Already, the authors have done a ton of media rounds, including TV appearances on Denis Levesque on TVA and Ça Commence Bien on V, articles in Le Journal de Montreal and La Presse and many radio interviews including some of the most listened radio shows in both Quebec City and Montreal.

The media in Quebec is indeed very receptive to pro wrestling, especially its history, and the attention the wrestlers get is more than just a celebration of Quebecois athletes.

“A lot of the current crop of newspeople have fond memories themselves from those days, it’s kind of a magical time for a lot of them,” said Hébert. “The chance to discuss this and have access to Quebec wrestling legends is a lot of fun for them. At the same time, they are as interested in Abdullah the Butcher as Dino Bravo. Regardless of their origins, many wrestlers in the different golden ages of Quebec wrestling have remained pop culture mainstays.”Naturally, like any second edition / reprinting, there were a few corrections / additions from the English version.

“Some fans have pointed out a few minor mistakes in Mad Dogs and we updated,” said Laprade. “We also have a brand new conclusion given the new light on the local scene with the rise of Sami Zayn with NXT/WWE and the upcoming return of Quebec wrestling on television on December 1st after a 26-year absence.”