Best of WWE 2013 Edition is a new set of trading cards from Topps. For a truly enjoyable box break, may I recommend you have your seven-year-old son open them with you, reading out the names of the wrestlers in a growling mock announcer voice.

He was pretty into it, enjoying the action on the front of the cards, and later, sorting them. “This pack, it’s pretty good,” he said again and again. He marked out most for a Rey Mysterio card, like a lot of young fans will, I figure. (I popped for the Bruno Sammartino card at the WWE Hall of Fame.)

That 110-card set is where the real treats are, as the card backs are written by Mick Foley. Sometimes he sticks to script, but in the traditional style for Mrs. Foley’s Little Boy, he veers off track just enough to make you laugh. 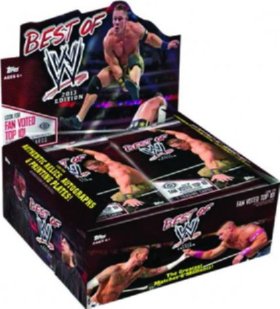 He tells a story about Rotten Ron Starr, leading into Bob Backlund’s WWE Hall of Fame card, and disses Brad Maddox: “I’m not saying that Maddox isn’t a talented young man with much to offer WWE, But how does he keep sneaking into this beautifully crafted set of Topps cards without actually accomplishing anything?”

And Foley adds some personal perspective too, from CM Punk: “I’ve known Punk for almost 10 years, and I’ve never seen his equal when it comes to a desire to be the best” to Cody Rhodes’ favourite kind of ice cream: “Pi-STASH-io!”

There’s a lot of AJ Lee too, as Foley points out. She was so key to storylines during that time, back when she was a valet / potential bride / homewrecker / Raw General Manager.

“It’s actually got a moment of kissing!” decried Quinn, aghast at the sight of AJ and John Cena locking lips.

The fan-voted Top 10s (listed below) are far more puzzling. My immediate thoughts were, What do the numbers mean? It’s hard to know once you just open the pack. What’s the criteria? Then you realize, oh, the FANS voted. That explains everything — like Curt Hawkins and Zack Ryder as #9 greatest tag team champions. Those card backs are a little more routine, and are not penned by Foley.

The whole ranking thing has me intrigued enough to seek out the ones that I didn’t get; somehow we just got ONE #1 greatest (nicely done in gold), and TWO #2s in silver.

While dealing with the box break, we did get two unique cards, or, as Quinn said, “How come these ones have this fuzzy stuff?” It won’t draw a huge resale value, but both the Authentic Shirt Relic – Damien Sandow and the Authentic Mat Relic – Jack Swagger, WrestleMania 29 are neat cards. And I lucked into both of those. “I didn’t get any special cards, but I did get some cool cards,” said Quinn.

Here’s what we got:

We’ll end this write-up with a further thought from Quinn, expressed as we pawed through the set: “You have to be tough to play wrestling, right?”