With the National Wrestling Alliance’s return to prominence comes with it increased exposure and products. Thus, the NWA has been making a concerted effort to put out more DVDs of some of its recent shows, including one for its NWA Parade of Champions event that was taped at the Houston Athletic Center in April.

The DVD begins with an introduction from NWA play-by-play announcer Matt Topolski, who does a good job running down the six advertised matches and provides some great commentary throughout the disc. Topolski is an excellent commentator and was able to effectively bring the matches to life.

From there things moved to a brief video package showing highlights of the featured wrestlers along with some computer graphics that were put together fairly well.

After that point, though, there were some surprises. It ended up that the expected first match was not the NWA Lone Star Junior Heavyweight Championship match, but rather a tag team match between Jasper Davis and David Duperon versus Jack Jameson and Rudy Russo.

While it’s always nice to get some extra material, the match really should have been a chapter selection on the DVD. The match itself started with a bit of stalling until Russo springboarded himself to the outside and the action picked up from there.

Russo had a very impressive performance throughout the match both with his offensive moves and the way he sold in the ring. He would, also, spend most of the match in the ring for his team until towards the end when he was finally able to tag his partner Jameson. Unfortunately, for the duo they fell prey to the teamwork of Davis and Duperon who were able to knock Russo out of the ring, while Davis took out Jameson and got the pin by using his feet on the ropes for leverage. 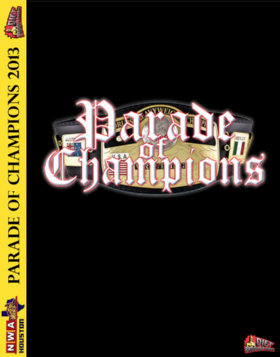 The other surprise with the DVD was a less pleasant one which was how dark the lighting was at the Houston Athletic Center. For the event, held on April 20th, the NWA switched off the overhead lights in the center and decided to use their own spot lighting which made for a murkier picture quality. There were also some jerky camera movements at times which affected the quality of matches somewhat. However, the picture quality was a decent and did make the following of the action fairly easy.

After the opening match was over a commercial for a local lawyer ran which was inappropriate and didn’t really belong on the DVD. Unfortunately, this issue resurfaced a couple of times on the DVD, with the same commercial, and one for a motorcycle company, being shown in between matches which after a while became a real annoyance.

After the commercial was over the NWA Lone Star Junior Heavyweight Championship was finally shown which featured Raymond Rowe challenging Mike Dell. The match started off with some old school arm bar, and head lock manoeuvres, and moved into additional chain wrestling that went back and forth for a while. Rowe demonstrated some real power with some of his holds until both descended into some fisticuffs. While Rowe utilized his power during the match, Dell showed off some high-flying action.

A really great spot in the match was when Dell had Rowe in an arm bar submission and Rowe actually picked Dell up and walked them over to the corner of the ring to break the hold. As the match progressed, both wrestlers traded near pinfalls, which helped to build the momentum towards Rowe’s eventual victory. Hopefully, this won’t be the only time the two faceoff in the ring because they put on a great match.

The DVD next moved to the NWA National Heavyweight Title match between the champion Damien Wayne and Carson. The match began with Wayne employing fists and kicks to Carson that seemed a bit dull. Eventually, Carson was able to energize the crowd with a nice scoop slam and some other wrestling moves.

Ultimately, the match seemed to be a contrast in styles as Wayne demonstrated a more methodological approach compared to the faster pace used by Carson. While the intensity built slowly it was done very effectively and made for entertaining viewing. The end, though, is marred by the fact that just as Carson was about to get the win, he was distracted by another wrestler in a cape which allowed Wayne to use a piledriver to get the win. 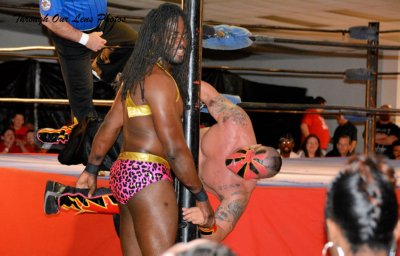 Thankfully, the next match, the NWA North American Championship between TokyoMonster Kahagas and the champion Byron Willcott was a very hard-hitting affair with lots of fists and chops employed by both competitors and a good finish. It was clear, though, that Willcott’s height was an issue during the match as he could clearly be seen trying to avoid hitting his head on the low ceiling at the Houston Athletic Center. Still, the two had a very physical battle with Kahagas eventually getting the pin through the use of a rollup.

The match that followed was pretty intriguing as it involved the IWPG Tag Team Champions, The Killer Elite Squad, Lance Archer — formerly known as Lance Hoyt — and Davey Boy Smith Jr., versus the NWA World Tag Team Champions, The Kingz of the Underground, Scot Summers and Ryan Genesis. It would prove to be arguably the best match on the entire DVD. 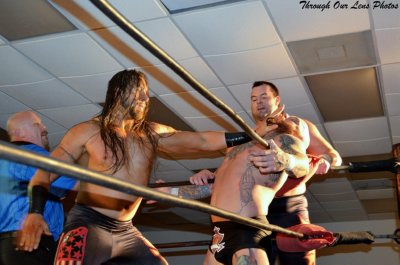 For anyone who has missed seeing great tag team wrestling on television, it was a prime example of what the WWE, TNA, and others, should be doing with that division.

The match had a wonderful flow and the two teams seemed game for just about anything. While, The Killer Elite had a size advantage the Kingz of the Underground didn’t back up for a second. During the match, the Killer Elite played the role of the heels and effectively isolated Scot Summers for a long time.

When Summers was finally able to tag Genesis, the Killer Elite continued their approach by now isolating Genesis and double-teaming him frequently. As the match approached the finish things broke down with all four men at times breaking up various pinning attempts, but The Killer Elite triumphed when they were able to hit a double Powerbomb on Scot Summers.

If there was any match that rivalled the previous one on the DVD it was the NWA World Heavyweight Championship match between “The Masterpiece” Chris Adonis (Chris Masters in WWE) and the champion “The Ironman” Rob Conway. What Adonis demonstrated in this match was truly extraordinary and far in excess of anything he was ever allowed to show during his time with the WWE.

Adonis and Conway put on a clinic in the ring that provided a true picture of the talent that the NWA has competing for their top championship. Both utilized great chain wrestling and reversals at the start of the match that helped to construct a great story in the ring.

The two were very effective at using what most might think of as an ordinary move and turn it into something special. For example a bridge that Conway used to get out of a pinning predicament was a remarkable moment in the early goings of the match.

As the match progressed Conway was able to injure Adonis’ knee which completely changed the tempo and Conway eventually locking in a Figure Four Leglock to further damage Adonis’ knee. Conway went even so far as to use the ropes for extra leverage before the hold was broken.

Still, Conway was able to get Adonis in the Figure Four Leglock a second time and it forced Adonis to use his strength to reverse the hold to get out of it. From there, Adonis was able to regain the momentum by using some power manoeuvres including a beautiful Powerbomb which Conway managed to kick out of.

Overall what The NWA Parade of Champions DVD demonstrated was not only the great wrestling that the National Wrestling Alliance has to offer, but the diversity of the talent and storytelling available. Hopefully, with time some of the issues with the lighting, camera work, and commercials will be improved and corrected so that future NWA DVD releases will be of the same quality as what has been put out by other companies.