Hanging out the highlight of The Big Event

QUEENS, NY — If I had only been concerned about my book and T-shirt sales, then my trip from Toronto to Queens would have been a disappointment. But getting to see some old friends, and sit at a table for a couple of hours with “Irish” Davey O’Hannon makes up for it.

And having Davey come back every so often after visiting with HIS old friends was excellent entertainment too.

“Do you realize it has been 41 years since I wrestled Bushwacker Luke?” he commented after visiting Luke Williams. 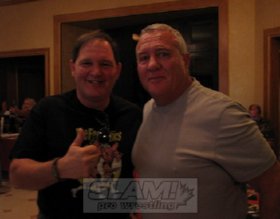 Bobby Fulton of the Fantastics and Irish Davey O’Hannon. Photos by Greg Oliver

Or sharing the story of the last time he’d seen Bobby “The Brain” Heenan — they’d been the final two people at the gravesite of Gino Marella, a.k.a. Gorilla Monsoon. They said their goodbyes in silence, but existed in the moment.

Davey taped a spot with Bill Apter (who has lost 30 pounds) for 1wrestling.com, where he put me and my books over as much as he did the Pro Wrestling Hall of Fame in Amsterdam, NY. (The cheque is in the mail, Davey!)

The Big Event was the name of the fan fest, and it was held at the beautiful Terrace on the Park in Queens, NY. The place was already crawling with fans when we made our first-ever trip driving into New York City.

Like any of these fan fests, there were some issues with crowd control — who set up the Hulk Hogan tickets in front of the only bathroom on that floor of the venue, anyway? But everyone seemed in good spirits, probably in part because it was such a nice day.

Davey and I got to sit near the table for Bruno Sammartino, who was definitely one of the main attractions. As always, Bruno was a class act, both with the other wrestlers, but the fans, as he took the time to listen and talk to them.

The rest of the list of people that was there, well, chances are I won’t be able to name everyone. 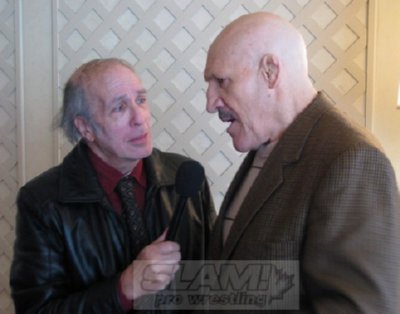 For me, it was nice to see the Rougeaus again. Jacques Jr. wrote the foreword to my first book, The Pro Wrestling Hall of Fame: The Canadians, which came out, gulp, a decade ago. And Raymond was just re-elected for a four time as a councilor in the town of Rawdon, Quebec.

I gave Chris Jericho a copy of my latest book, Don’t Call Me Goon, which is all about hockey enforcers. Later, I learned it was his birthday too. Chris did ask, “Is this the first time we’ve actually met in person?” Had to think about that one. Maybe. I first interviewed Chris back when he was with WCW, for a long piece about his time in Mexico. Later, I was so in tune with what was going on that I was actually the one that called his dad, former NHLer (but not a goon) Ted Irvine, to tell him that his son had signed with WWE. So we go way back too.

Bobby Fulton I had never met, but he is a huge fan of our SLAM! Wrestling website, and of the books that I have written with Steven Johnson. Naturally, given Fulton’s success in the Fantastics with Tommy Rogers, he loves The Pro Wrestling Hall of Fame: The Tag Teams the best.

The wrestling media world isn’t that big, so it is always nice chatting with Mike Johnson of PWInsider.com, or Bob Mulrenin from WrestlingFigs.com, legendary photographer George Napolitano, and SLAM! Wrestling contributing photographers like Christine Coons and George Tahinos. And old fan friends like Shuhei Aoki and Lewis Curry can always make me smile.

Besides The Big Event, we are in New Jersey for a family vacation, visiting friends. Sunday night, we’re going to the New Jersey Devils versus Nashville Predators game and I’m going to be interviewed on FoxSports Tennessee. Then it’s a few days touring around, hopefully concluding with my son’s first trip to Cooperstown and the National Baseball Hall of Fame and Museum.

Going in to the fan fest, I was curious about any overlap between wrestling fans and hockey fans, whether I would sell any copies of Don’t Call Me Goon. Alas, I did not.

But hey, I did learn that Davey O’Hannon is a big hockey fan, and had watched the Devils lose to my beloved Maple Leafs on Friday night, though he gave up hope as the shootout started.