Today is a unique day for Ring of Honor, as the Philadelphia-centred company takes time from its normally hectic touring schedule for a unique awareness event – an open photoshoot – in support of NOH8 at the National Armory between 3 and 6pm.

NOH8 is a unique non-profit organization. Founded by photographer Adam Bouska and his partner Jeff Parshley, the campaign is built to, as stated on the group’s website, “promote marriage, gender and human equality through education, advocacy, social media, and visual protest.” Its foundation came in 2008, following Proposition 9 which sought to ban gay marriage in California. 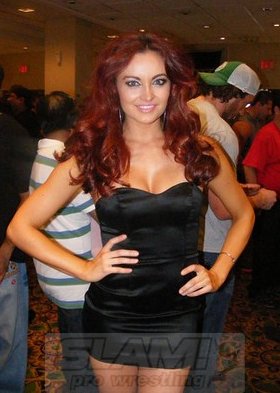 For RoH performer Maria Kanellis, the event is greatly anticipated. Kanellis, who helped bring RoH and NOH8 together, has been a supporter for NOH8 for several years, with photos of her and fiance Mike Bennett in the familiar poses of the campaign, which feature individuals fully dressed in white with tape over their mouths.

“NOH8 and I have had a great relationship for a while,” Kanellis told SLAM! Wrestling in an exclusive interview. “I’ve done the photos for them twice and I thought this would be a great time to do it. I contacted them to see if they would be interested and they most definitely were. This has been in the works for about five months, so we’re very excited for this weekend in Philadelphia.”

Her reason for getting involved in the campaign is simple – the effect that it has on the family structure.

“I think love is love, and I think children should not be hurt by the fact that their parents aren’t seen as being legally married,” Kanellis explained. “You think about these children who are told their parents are gay, lesbian, bisexual… they’re little kids – they should get the same rights as any other child.

“I think that if two people are in love, why shouldn’t they get married?” she continued. “I think it’s ridiculous that we’re still even talking about it. It’s one of those things where our country is a little bit slow in coming to the realization that love is so much more important than hate. It should be looked at as equal.”

Homosexuality, however, continue to be a major topic, especially in pro wrestling of late, with Darren Young recently announcing he is gay, and a unique lesbian angle between Taeler Hendrix and Heidi Lovelace in Ohio Valley Wrestling.

Kanellis, the “First Lady of ROH” remarked that the support shown by the wrestling world has come from a change in philosophy at the top of the respective companies.

“I think it’s becoming more acceptable to the office or the ‘powers that be’,” Kanellis says. “It was never an issue with the talent themselves; now that it’s becoming more topical, I think wrestling is becoming part of this movement which I am very proud of. So many of our guys are excited about it.”