Natalya’s on a Total roll

In the past year, WWE Diva Natalya’s life change quite a bit. She’s now a star on E!’s Total Divas show, which has been a big rating success and married long-time boyfriend Tyson Kidd. To top it off, she’ll have a chance to be Diva champion one more time next Sunday at the Night of the Champions PPV. But before that she’s making a run through Canada — on Friday, she was in Montreal, Monday in Toronto, and Tuesday she’ll be in Ottawa. 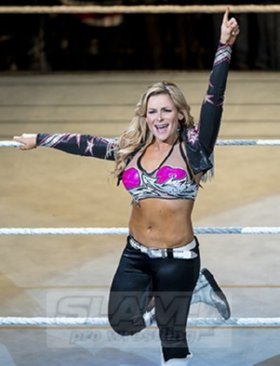 Natalya in Montreal at the Bell Centre on Friday. Photo by Minas Panagiotakis, www.photography514.com.

Total Divas is about the backstage encounters of WWE Divas such as the Bella Twins, Naomi, Cameron and Calgary’s Natalya. While the show’s success surprised many wrestling reporters at first, for Natalya, it wasn’t a surprise at all.

“We have a great group of girls and with the WWE platform, I’m not surprised it’s a huge success. We’ve been working really hard on this,” Natalya told SLAM! Wrestling.

The first season of the show ends with Natalya’s wedding with TJ Wilson, better known to the WWE Universe as Tyson Kidd, who is also from Calgary and was a childhood friend of Natalya’s cousins Harry Smith and Teddy Hart.

For someone who’s always been kind of private about her personnel life, was it hard for her — and for her future husband — to be exposed so much on television?

“Normally, I wouldn’t have time for a wedding with my schedule and being on the road all the time. So it’s a great opportunity to stop and have a wedding,” she explained. “Six months ago, I was very private about my personal life and now everything is exposed, so it’s been crazy recently! About TJ agreeing to it, well, let’s just say I always get my way with him!”

Total Divas brought more issues between her and the Bella Twins, especially Brie, who she happens to know pretty well. But even in adversary, she has the outmost respect for her arch-nemesis.

“Brie is very special. We started together, we were in developmental together, we got brought to the main roster together. We’re doing Total Divas now. I have a lot of respect for Brie. She is maybe one of the toughest girls I have ever faced. I realized that when I wrestled her at SummerSlam. I’ve never been hit so hard by any other Diva. She’s underestimated and she proved to me that she is a real contender for the Divas title.”

Nattie Neidhart, 31, started officially with the WWE in 2008. Before, she was in developmental and, of course, she cut her teeth on the indy scene for a while.

“The difference between indys and WWE is the consistency. What I have more now is the consistency. On the indys, SHIMMER, ECCW, Supergirls, you try to break in. But B.C. is so far from other markets in Canada that I was wrestling more locally, where you can’t work everyday, not as much as I could and want. So I was travelling to England or Japan to work every day. Now, I wrestle and entertain every day, six or seven days a week and that’s what you need to do to get good at it.”

When she first started, she teamed a lot with veteran Lisa Marie Varon (a.k.a. Victoria and Tara) and according to Natalya, she was a great help in her career.

“Lisa Marie was just great. My first dark match was against her. It was a pleasure to work with her. She took her role of veteran seriously and she was really a big help for me at the time,” said the former Divas champion.

Being the daughter of Jim “The Anvil” Neidhart and the granddaughter of the late Stu Hart, she doesn’t have to go far to find good advice.

“My dad, my uncle Bret, and even my grandpa when he was alive, were all great to give advice. I have the upper hand with so many family members involved in wrestling, my family is great for advice. They have great references,” said the lone active member of the Hart family in the WWE. There are a number of cousins out there on the indy circuit, including Teddy Hart, Michael and Matthew Hart (sons of Smith Hart), and Harry Smith.

Talking about her grandpa, given the time frame he was promoting and wrestling, he wasn’t the most supportive women’s wrestling fan out there, but he thought the world of Hall of Famer Mae Young. And for Natalya, it was enough to pick Mae as her dream match.

“I would have loved to work Mae Young. She used to wrestle for my grandfather and he always said that Mae was a real shooter. He was never as impressed with women wrestlers as he was with Mae. He often said she was the toughest women wrestler he’s seen. I always wonder what it would be like to wrestler her in her prime,” said Natalya, who has some amateur wrestling background and of course, was trained at the fame Hart Dungeon.

This coming Tuesday, in Ottawa, it will be the last Smackdown tapings before Sunday’s Night of the Champions PPV in Detroit. Natalya will be competing for the WWE Divas title, in a 4-way match against WWE Diva champion AJ Lee, Brie Bella and Naomi. It will be her big chance to become a two-time WWE Divas champion, a title she held for the last time in January 2011.

Having a Canadian tour right before this big opportunity could make all the difference in the world, as Nattie will come in Detroit full of positive waves.

“The air is different in Canada, it’s some refreshing air. I always look forward for these Canadian tours, with Montreal, Toronto, Ottawa. I get to the building earlier, I sign autographs. They have a lot of respect for my family so I’m always treated even better in Canada.”

WWE Smackdown is in Ottawa this Tuesday at the Canadian Tire Center. Bell time is at 7pm. All your favourite WWE Superstars will be on hand, including the Ottawa return of WWE Hall of Famer Edge. Tickets can be bought through Capital Tickets.