On Wednesday in Montreal, Jacques Rougeau held a press conference announcing his return to pro wrestling. Retired from the squared circle since May 2011, Rougeau said he would be teaming with his son Cedric, who’s six-foot-5 and 300 pounds. 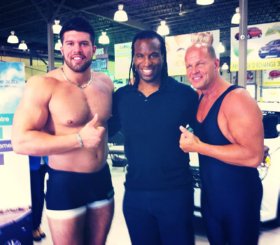 He also announced that former hockey player and well-known fighter Georges Laraque would be the ring announcer for his next tour around Quebec.

In an interview that same day on TVA, he explained why he quit two years ago.

“I retired because of a serious shoulder injury. I had ripped three ligaments in my shoulder and wasn’t able to wrestle anymore,” he said.

To show that his shoulder was allright, he bodyslammed his son live on TV. It should be noted that when he did retire, Rougeau never mentioned being injured.

Rougeau has lost 50 pounds since his retirement and looked very good.

Rougeau also said that he didn’t hear anything further about the death threats he received this summer.

As well, Rougeau was asked about Darren Young, the WWE star who recently revealed that he is gay.

“I don’t know him. But maybe we’re gonna see the small package more often!” cracked Rougeau — in French the word package (paquet) means nut sack. “He’s going to be laughed at and bullied. Guys on ‘roids you know, they show no mercy. If it’s the same than when I was there, it’s going to be hell for him.”

Besides his regular students, his sons Cedric and Emile, the tour will feature midget wrestler Tiger Jackson.