A few months back I saw a note on the Wrestling Observer website about a pro wrestling fiction book called Blood Red Turns Dollar Green. The title got my attention with the age-old wrestling reference that blood will turn into green dollars at the box office. 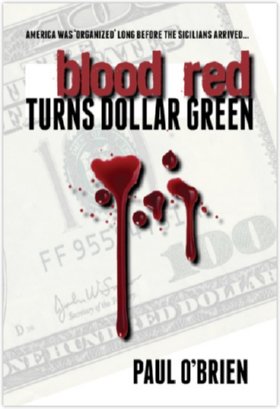 I was intrigued, as wrestling fiction is hard to come by and it usually not that good. In fact, it’s a short list: 1992’s realistic Bucket Nut, and the 2008 movie The Wrestler starring Mickey Rourke. I recently picked up the novel Death Match by former wrestler Boob Roop, published in 2002, and I can’t wait to read that — I don’t know how I missed its publication.

I love wrestling and this type of project gets my attention, as they are very rare and I am always curious how those novels or movies can be turned into something that will please the wrestling fans and the casual reader at the same time.

Blood Red Turns Dollar Green looked like a quality project, as he had endorsement by the famed wrestling writer Mick Foley: “Paul has really done his research with this book. I did not know what to expect but he is really quite a writer. He has captured the feel of old-school professional wrestling territories almost perfectly and it really brings these characters to life. The action in the ring was the way it went down back then. And that ending. I’ve already asked him: ‘how long do I have to wait for more?'”

With that praise, I wanted to add the book to my collection, and started to research on author Paul O’Brien and his work.Wrestling fans will love it, how he sets up the world of the wrestling territories in 1972 with different promoter conniving to get the champions. While attempting to make more money without sharing with their fellow business partners is as real as real can be. We mainly follow second-generation promoter Danno Garland as he finally gets to have one of his wrestlers become the touring champion, totally changing his business. Along the way, he plays back room politics with Proctor King, his big promotional rival who wants his son to succeed the champion.

However, just like in real life, he has much bigger plans than having a strong territory and preparing the next man in line to win the championship. Fans will get a kick of going back in the book after finishing it to try and find clues that set us up for an ending that will leave you scratching your head and wishing that you could start Volume 2 right away. I was at first flabbergasted by the ending but after going back to read the few last chapters I just loved it, as I now saw clearly what was brewing all along.

The other main character is Lenny Long, who gravitated to the business and started working in it. He ends ups slowly learning the ins and out of wrestling, just like the uninitiated readers, as he is given more and more odd jobs until getting a major responsibility and finding himself in big troubles because of a car accident that will force him to go back in his memories to figure what he should do next. Even with his family waiting for him, leaving the business for good might not be as easy as he first believed.Wrestling fans will be very happy to see the very detailed world of an era gone by with giants, old hands, former wrestlers, a secret homosexual couple, and all and all, very rich context — like the inclusion of a woman as a promoter in the middle of those shark promoters.

The mystery gets thicker as people get strong armed as business picks up.

Paul O’Brien is a writer from Ireland who has been writing plays and screen plays for the past 15 years. This is first novel and he really hits an home run, hitting the number one spot in wrestling books on both Amazon US and UK. The novel was selected as “Best Crime Fiction of 2012” by Spintingler Magazine. The just released Volume 2 has also been well received by fans and critics and I, for one, cannot wait to read my copy.