ATLANTA – For the first time since Monday Night Raw on February 5, the WWE returned to Philips Arena in Atlanta. While most members of the WWE Universe were at home watching a pre-recorded episode of Smackdown! WWE fans in Atlanta were treated to a very entertaining nine-match, three-hour house show.

For those who have never been to a house show, it’s a nice change of pace from the usual wrestling programs. While it may seem like a scaled-down WWE event because there’s no pyro, commentators or any of the typical pomp and circumstance (neither Money in the Bank winner came to the ring with their respective briefcases), I actually prefer these events for three main reasons: no real storylines, no breaks for commercials, just a bunch of solid wrestling matches.

Kicking things off was Fandango and Alex Riley. I honestly forgot that A-Ry was still on the WWE roster. It seems as though I wasn’t the only one because the kids who were sitting behind me were rooting for Fandango simply because they said they had never seen A-Ry in WWE. Fandango gets the win via pinfall and unfortunately because of the screaming kids behind me, that’s all I really remember about the match.

The second match is a tag-team bout between TOF (Tons of Funk) and PTP (Prime Time Players). After Brodus Clay picks up the win for TOF, he, Sweet T and the Funkadactyls bring in six kids to dance around with them in the ring to celebrate for a few minutes. It was one of those nice moments when you get to see how something like that truly makes a child’s day/week/year. 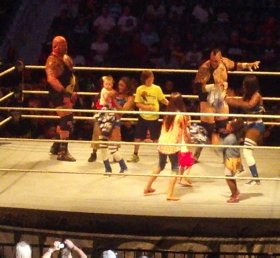 The kids dance with Tons of Fun. Photos by Matthew Asher

Before the third match begins, we’re treated to a quick video package from Wade Barrett. Something along the lines of Barrett wanting to give newborn Prince George the gift of the Viper’s head on a platter. Somehow I don’t think that would go over well with the Duke and Duchess of Cambridge. Still, Lillian Garcia tells us that we get to vote on the type of match between Randy Orton and Wade Barrett later tonight. The choices are a 2 out of 3 Falls Match and a No-DQ Match. I think we all know which match it’s going to be.

Match number three is for the Divas title with AJ Lee (sans Big E Langston) defending the belt against Kaitlyn. Unlike typical TV matches, this one actually is entertaining, AJ picks up the win, albeit slightly tainted via using Kaitlyn’s pants as leverage for the pin, but it was a good match focusing on Kaitlyn’s strength against AJ’s elusiveness.

The fourth match is between Damien Sandow and Sheamus. Even with Sheamus still sporting a bruised thigh, he’s able to handle his own. True to his intellect, Sandow gets out of the ring and appears as though he’s going to tuck tail and run. But Georgia’s own Cody Rhodes will have none of that. Cody runs out, tosses Sandow back into the ring to allow Sheamus to hit the Brogue Kick. After the win, Cody steps into the ring and nails Damien with the Cross Rhodes.

We finally get the results of our interactive match featuring the Viper and the Bull. No surprise here when a No-DQ Match is announced. After Wade Barrett comes to the ring, the crowd gives Randy Orton the biggest pop of the night. Even though anything was allowed, the only foreign objects used in the match were a pair of kendo sticks. Still, Orton is able to counter Wade’s Wasteland into an RKO to pick up the win. 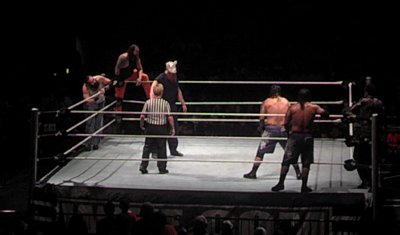 The Wyatt Family in action.

After a 15-minute intermission, match number six began. I showed up a little late for this one (blame the long bathroom lines) so I was unaware that the Wyatt Family would be taking on the Usos and R-Truth. After all the weeks of promos, I was very impressed with Bray Wyatt. I never expected such a big man to have such agility. The Wyatts picked up the win, which was a little confusing because Bray (who wasn’t the legal man) was responsible for the pinfall. Still, if you’re skeptical about this trio, they are definitely worth the hype.

The seventh match was surprising, simply because I expect this one to be a PPV match within the next few months. Big E Langston (sans AJ Lee) squares off against Dolph Ziggler. I guess one of the reasons for this match was the ending. Both Dolph and Langston get knocked out of the ring and Ziggler just makes it back in before the count of 10, giving him the win. Big E isn’t happy with this and sets up Ziggler for the Big Ending, but Ziggler is able to counter it into the Zig-Zag (worst name for a move ever) and leaves the ring more or less in one piece. 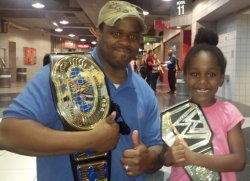 A father-daughter championship combo at the matches.

Match number eight featured one Jack Swagger (with Zeb only) against Rob Van Dam. For a while, it was a battle of “RVD!” and “We the People” chants. This was the first time in two years I had seen RVD in action (last time was a TNA house show) and I was very impressed. A good mix of Jack’s power moves and RVD’s finesse. I would have no problem seeing a match between these two men on PPV in the near future.

Finally, the strap match was a World Heavyweight Title match between Alberto Del Rio and CM Punk. It’s actually a very entertaining match, but a shame because we all know CM Punk isn’t leaving Atlanta with the belt tonight. ADR gets out of the far side of the ring. While I can’t see exactly what ADR hits CM Punk with to get disqualified, I believe it was a microphone. After the match ADR tries to hit Punk with a chair. Punk counters, connects the GTS and lets the crowd leave on somewhat of a high note.

It’s announced that the next WWE event in Atlanta will be November 19 for an episode of Smackdown! Can’t wait.

Matthew Asher is a freelance journalist currently living in Atlanta. He would like to remind the mother who sat behind him in the stands that she still owes him $1 (or her first-born son) because he correctly predicted CM Punk would win via DQ. He would prefer the $1 if she’s wondering.