Scorpio Sky flies high and aims for the stars

When a door shuts, a window opens. Though stints in TNA and WWE didn’t provide permanent work for the high-flying Scorpio Sky, the wrestler showed off his skills and unsuspecting comedic ability on a nationally broadcast stage. Fortunately, for the man known as Harold in the WWE and Mason Andrews in TNA, his time outside of televised wrestling was short-lived. Championship Wrestling from Hollywood made their product more widely known when they debuted on MAV TV at the beginning of May. 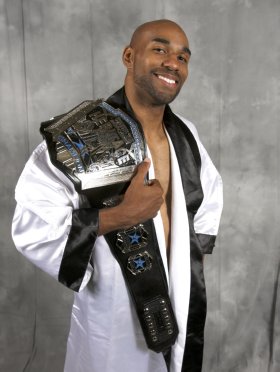 Scorpio Sky in a Championship Wrestling From Hollywood photo shoot from May 2013. Photo by Adrian Garcia

It is shown weekly on television that the character of Scorpio Sky takes wrestling very seriously. However, the man behind the character, Schuyler Andrews, see this as an opportunity to display all facets of his game to the world.

“What we are doing is different, that’s why we call our group the Experience. You watch the show, you sit and enjoy the matches, you have a good time,” Andrews told SLAM! Wrestling. “But when my music hits, you see the beautiful woman walk out. Christian Cole struts out in a dapper suit. Big Duke walks out snarling at the crowd and then myself, the centerpiece of it all, you know you are experiencing something different. It’s magical. It’s like a dance club, a fight camp, a rock group! It’s the Experience.”

Andrews brings out the flare of a showman in Scorpio Sky, and the showstopping atmosphere continues into the ring. While the character may be played up a bit for the cameras, Andrews aims to bring oohs and awes in the ring with hard-hitting realism.

“I always try to bring that big fight atmosphere to my matches. There’s nothing like a big fight. The excitement, the uncertainty, the mystery of what may happen,” Andrews said. “A great part of the person you see in the ring is just me. I truly love fighting, I train and have competed in boxing and MMA. Christian Cole is my advisor in real life. What you see is pretty legit and I think my realism comes through. The fans know I’m the real deal. At the same time, I always try to make what I’m doing fun. Fans have a good time watching me.”

So does David Marquez, the man behind Championship Wrestling From Hollywood. “Sky has more charisma than he knows what to do with, and that makes for a great talent. And since we produce television its an incredible quality to have,” said Marquez. “Once we have an idea and once its pitched Sky always has great suggestions to plus the idea and once he has his head wrapped around it, the execution is usually a home run.”

Andrews further elaborated on his no-nonsense style, describing the impact of some of the sister sports to professional wrestling on his technique.

“I grew up watching Muhammad Ali tapes, so he’s a hero of mine. Around 1993, I started watching the Ultimate Fighting Championship and was blown away. I trained off and on growing up in karate and a little boxing. I probably watch some form of boxing or mixed martial arts every day, just studying styles and techniques. I’m a student of the game. It only feels natural using these things in wrestling. When I started doing it back in 2003, it wasn’t as common as it is now. It’s fun to play around and see what works and what might not.”

This isn’t the first go-around on television for Andrews. While he may not have been a centerpiece in the limelight of WWE or TNA, Andrews managed to learn some invaluable lessons during his time in the “big leagues.

“One of the cons of being on the big leagues is you don’t always get put in a position where you can show your best. That’s not their fault. You’re lucky just to be there, no matter what they have you doing you should try to make it work,” Andrews explained. “At WWE, Harold would not have been my first choice to debut as. It would not have been my second, third, or even fourth choice! But it’s an opportunity. I just took it, tried to have fun with it, and tap into something I haven’t shown before. I think it worked to a certain extent.”

Andrews also elaborated on some of the brighter points of the big time. “The pros are obviously the visibility. The combination of the TV time teamed with fans having the ability to search you online after just grows your fanbase tremendously. Being able to learn off guys like William Regal, D’Lo Brown, and so many others can’t do anything but up your game. I think I’ve grown so much as a performer over the last year or so just having access to those minds pushing me that much further. The money doesn’t hurt, either!” 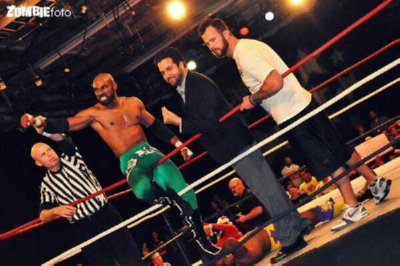 Wrestling is a road of peaks and valleys. It would seem that Schuyler Andrews has traveled these mountains and. while reaching a level of contentment with his current place in professional wrestling, plans to never stop evolving.

“I think I’ve grown not so much as a wrestler, but an overall performer. I use my mind more now. Anybody can go out and do flips to make the crowd cheer. When I was younger I always tried to do something different every match, and I am blessed with athletic ability so it was easy for me,” Andrews said. “Nowadays. there are great athletes on every show, so you have to bring more to the table. Having the complete package is more difficult. I shoot for covering all the bases from wrestling, character, the walk, the talk, the swagger, and sometimes I hit it. Sometimes I fall short. It’s something you never stop working at.” 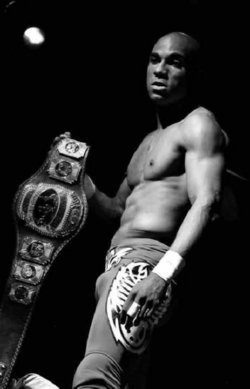 Stylin’ in black and white.

Though Andrews maintains a straightforward, modest demeanour about his own abilities, it has been hard for others not to take notice. Legendary aerial artist Paul London had particularly high praise for Andrews. “Scorpio Sky is excellent, one of the most overlooked, underrated free agents out there,” London remarked. “He’s just a natural athlete. He’s just very innovative. It’s hard to explain. What he does is very convincing in a very off-beat, athletic way. When I say off-beat, his matches aren’t too predictable, and I like that.”

London was hard-pressed to find anything to improve upon, but he managed to offer this bit of advice: “If anything, if I was to say something to Scorpio, it would just be, ‘Really develop character. Work on some characters for yourself.’ As silly as that sounds. It just goes to show, physically he’s not really lacking anything. Talent-wise, he’s really exceptional.”

When the show closes up for the night and the proverbial mask is taken off behind the curtain, every spectator will take away a unique experience from the show they just saw. While some only turn it up for the big, raucous crowds, others will perform the same way for handfuls or for thousands. In closing, Andrews made it clear which group he belonged to.

“I want to be remembered as someone who always delivered quality. Somebody who always made you forget about whatever else you had going on in your life at the time and completely pulled you in by the moment.”