Clocking in at close to two hours, Kayfabe Commentaries’ YouShoot: DPP runs through almost every aspect of Diamond Dallas Page’s career. During the course of the interview Page is forthright and upfront with his answers.

The DVD is a part of a series of “YouShoot” DVDs from Kayfabe Commentaries, drawing questions from fans through email, Twitter and video which results in some unpredictable topics being broached. Previous YouShoots include everyone from Dixie Carter to Kevin Nash to Sunny. 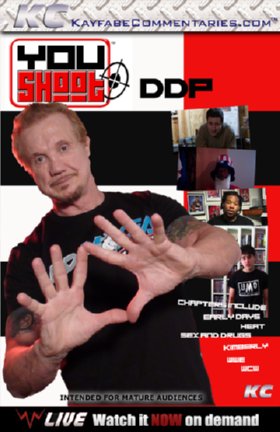 The interview is split into various sections on Page’s early career, his ex-wife Kimberly, his time in WCW, his time in WWE, pot pourri, and other topics. One of the interesting nuggets gleaned from the beginning of the interview is that DDP did in fact wrestle in the late 1970s/early 1980s, but after having a bad experience with a match he decided to give it up and go into the nightclub business. When wrestling exploded later on in the 1980s, Page states he was so mad at himself that he couldn’t bring himself to watch any of the programming — until Jesse Ventura started doing color commentary for the WWE.

Some very interesting responses come when Page discusses his time working for WWE after his WCW days. During this point of the interview it is extremely perceptible that one of Page’s greatest regrets is the infamous stalking angle involving The Undertaker’s wife, Sara (since divorced). It’s pretty obvious that DDP has spent a fair amount of time dissecting what happened and why. However, Page makes it clear that he was able to learn a great deal from it and apply it later on in life to his business dealings.

For those fans of the New World Order, Page talks about one of the bigger moments he was involved in with the angle, which was when he refused to join the group. According to DDP, the execution of this famous vignette was put off for weeks and when management at WCW were finally going to allow it to go forward, they kept cutting the time that was to be allotted to it. While Page has obviously made his peace with what happened, in the telling of the story, one is left with the impression that it might still irk him a little.

There are also a couple of off-color questions including one person who wrote in to ask Page what it was like to have sex with Kimberly. Page deftly answers the question in a respectable fashion, and whenever he discusses his ex-wife, it’s evident that he still cares for her, which was nice to see.

Page is also asked about his past disagreement with Scott Steiner, but DDP makes it clear that it’s all water under the bridge now. There is one question during the interview which Page deflects though, which is when he is asked about why Mark Madden, the former WCW commentator, has such a dislike for him. Page simply responds with a “who?” before moving on to other topics. It would have been nice to get Page’s take on why Madden has such disdain for him, but it’s possible that DDP’s choice to respond in that fashion was his wanting to not draw any further attention to it. The topic of Brutus Beefcake’s issue with DDP is raised as well and Page doesn’t hide from it. In fact he fully discusses it and tells exactly what the issue stems from and leaves little doubt that he feels badly about it.

DDP also extensively discusses how he got into yoga, the impact it has had on him, and how he is working with Jake Roberts to help him. From all appearances, the interview appears to have been recorded in late 2012, which is why Page qualifies a bit when he discusses Roberts, and helping him, as he wasn’t sure how things would work out — with DDP currently looking after Roberts as he attempts to get his life back on track. Still, the esteem that Page holds Roberts in is without question and DDP breaks down for the viewer in what way Roberts impacted his career and his life.

Additional topics Page discusses include his nightclub days, how he plans out a match, and how he initially refused to be the host for WWE’s Best of WCW Monday Nitro DVD series due to his feelings about how WWE has had a tendency to rewrite history.

Nevertheless, no matter what question he’s asked, Page proved to be engaging, open and relaxed, and it really added to the viewing experience. For any fan of wrestling in the 1990s this Kayfabe Commentaries interview is highly recommended as it provides a fairly good portrait of its subject and is an enjoyable viewing experience.