As “All-Starter” Brent Banks will tell you, looks can be deceiving. While the tall, lanky Banks’ ring attire suggests that he invades LeBron James’ closet, he would gladly trade in an NBA Championship for a WWE one any day. Just ask him.

“I never really played a lot of sports in high school, but I always played recreational sports. I was always very competitive and would often rely on my athleticism,” Banks told SLAM! Wrestling. “Like most others, I grew up just watching wrestling on TV. It was kind of like reading comic books, which I always liked to do as well. There was a lot of action and storytelling, which I enjoyed.” 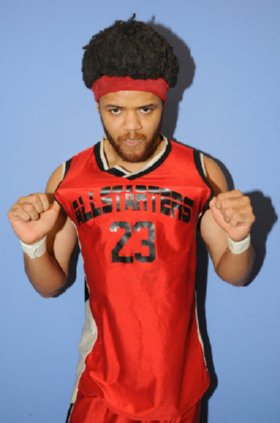 Banks, whose real name is Brent Levy, was born and raised in Toronto. Despite the fact that he was a major wrestling fan, Banks never really considered turning his love of wrestling into a career, until he was a little older. He was already physically fit and had an athletic background, but he just needed some motivation.

“It was time for me to take the next step. My cousin was actually a wrestler before I was, and he kind of gave me that extra push,” Banks said, referring to Jonathan Rennals, who wrestled as J Ruken. “He wrestled in Ottawa and he wanted to make sure that I started as well. So he told me to just try it out and see what comes of it.”

And what has come of it thus far are years and years of success, and stories that he already has to tell his grandchildren one day. But before thinking about his future grandkids, Banks first needed to let his parents in on his plans.

“My mom was really worried about me. It’s not that she didn’t think I could do it, but just that she didn’t know too much about the business, or what I was getting myself into,” Banks said. “My dad was a little less supportive.”

Banks eventually did get his parents’ blessing, and was now one step closer to living out his dream.

“I got a fax from my cousin about the nearest schools in my area. Squared Circle was the first school that I thought of, because it was the closest one to me,” Banks said. “I knew it was going to be tough, as there was a lot of high impact stuff going on. But the trainers really took their time with us. My trainers Rob [Fuego] and Kobra Kai were great.”

The second that Banks walked through the doors of Squared Circle, he became a professional wrestler. He realized that there was no turning back; at least not for him.

“I would usually come in early to just prepare,” Banks said. “We would start with stretching, so we did a lot of push-ups, sit-ups and squats. Then we would do different rolls, and just learn the basics.”

“Brent came in to train years ago. He was by himself and I remember him being this really quiet kid. He was tall and skinny, and didn’t talk much,” said Squared Circle head trainer Rob Fuego. “But I find that most of the better wrestlers are the ones that study more than anything else.”

Banks may be lighter than most people who are his height. But because of that, he is a lot faster and is also able to do moves that most taller people can’t do, which puts him in a very advantageous position. 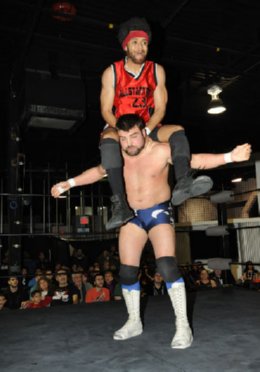 When the tall get taller — Brent Banks goes for a ride on Mathieu St. Jacques in March 2013. Photo by Mike Mastrandrea

“He’s definitely very athletic. I’ve seen him jump from the ring canvas right to the top rope,” Fuego said. “It’s usually the leaner guys who can do the really high flying moves. I remember telling him once to do a dive over the top rope and he kind of looked at me funny, and said, ‘Are you sure about that?’ But I wouldn’t have made him do it if I didn’t think he could. I’ve always pushed him to do these extreme things, because I believe that he’s just that good. But sometimes, he needs to believe it.”

When Banks first started wrestling, he probably didn’t realize at the time, exactly how many people would be watching. Perhaps the most interested observer was indie sensation Tyson Dux, who would later be paired with Banks in some very hot matches.

“I met Brent at Squared Circle a few years ago,” Dux said. “I thought he was one of the top kids there, and not long after, we started teaming together at indie shows. We had so much chemistry as a team that the promoters then started putting us together in feuds. There are a lot of young guys out there, who you can tell are going to be something. I remember when Michael Elgin was younger, I felt the exact same way about him that I do about Brent. I hate to toot my own horn, but I’ve actually been batting pretty good when it comes to future stars.”

Banks and Dux have really gone to war with each other in recent years and have been lighting up Ontario’s indie scene with their now classic matches; one might say that they bring out the best in each other.

“Brent’s technically sound and he’s very agile. He needs to be more outspoken though and have a little more charisma. But then again, some people don’t have to scream to cause some ripples in the water,” Dux said. 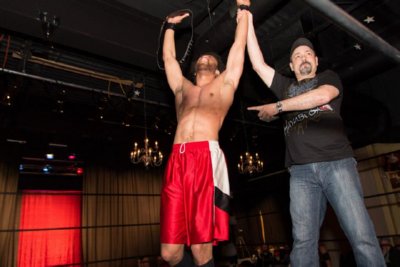 Jimmy Korderas raises the arms of Brent Banks at the end of April. Photo by Tabercil

At a recent Squared Circle show named EPIC ENCOUNTERS in Whitby, Ontario, Banks defeated Dux to become the Interim Premier Champion, after being assisted by Toronto’s own Jimmy/James Korderas, who was in Banks’ back pocket the entire time, in what is now known as “The Whitby Screw Job.”

Sebastian Suave is an Ontario worker who has ventured to Japan and Mexico, and has known Banks for years. Most insiders will tell you that Brent Banks’ biggest flaw is that ‘he’s too nice for wrestling,’ when in truth it’s his biggest strength. His path to success is a slower one than others but all of his accomplishments are a result of his own hard work. No politics, no favours, no shortcuts. Just raw talent and a level of integrity that refreshing to see. While others decide to bandwagon this month’s flavour I proudly consider myself a Brent Banks Guy,” said Sauve, adding that Banks has a “unique and marketable raw talent. That’s something you just can’t be taught and he’s got it.

Wrestling careers can be very unpredictable, because nobody knows for sure how long they will last. But Banks, who’s still only 27 years old, is clearly prepared for anything. He currently works with his father during the day as a landscaper, so he’ll have something to fall back on if things don’t work out.

“Some of the best advice I’ve heard is the advice that Jesse Ventura gave to Chris Jericho, which was to just be prepared for a lifestyle of pain,” Banks said. “I definitely want to try and get to the point where I could end up doing this for a living. It doesn’t necessarily have to be WWE. I would enjoy wrestling in TNA or New Japan as well. I’d like to try to get more work in the business. It’s pretty hard to get your name out there.”

Brent Banks returns to Whitby on June 30 to defend his new Interim Championship against Ring of Honor’s Adam Cole. But Banks hasn’t forgotten about former Premier Champion Josh Alexander, who he’s been mocking all over social media lately.

Squared Circle presents COLLISION COURSE on June 30 at the Class Act Dinner Theatre in Whitby, with a start time of 7 p.m. Tickets are available for $10.