For Ontario wrestling fans, the name Eddie Osbourne immediately brings to mind the image of blue-eyed, red-bearded, red Mohawked, fierce competitor who has distinguished himself with various promotions throughout the province. Now Osbourne is about to embark on his grandest adventure to date, when he moves back to British Columbia after a 12 year absence.

“I spent the first 17 and a bit years of my life calling Campbell River, BC home; I find it funny how much I took the beauty of BC for granted,” the 30-year-old Osbourne told SLAM! Wrestling. “When I moved out to Southern Ontario it definitely was not home. I am not saying Ontario isn’t beautiful, it is, but it is definitely not Vancouver Island. I never thought I would stay in Ontario for 12 years, the original plan was to train for a year and then learn enough to get some bookings back in B.C. and to continue to train and wrestle closer to home.” 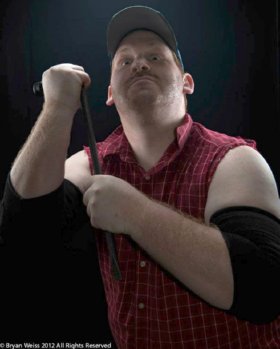 Eddie Osbourne is movin’ on. Photo by Brian Weiss

However, Osbourne found that life got in the way and that the convenience of things being so accessible in Ontario was very enticing.

“A lady friend, a job, and of course, my wrestling were on my plate in no time,” recalled Osbourne. “A few years later, I was running my own promotion the Pure Wrestling Association (PWA). So even though I thought about going home every day, I never actually thought I would get back there until I was old or in a box.”

Osbourne found that life can work in mysterious ways and over the years he was blessed to become a father to a little boy, but also had to say goodbye to his own father and two of his brothers who all died.

“My brother Stephen passed in February of 2004; besides my mother saying, ‘Go do it,’ he was my biggest supporter when it came to following my dreams,” Osbourne explained. “When I was informed of his passing away it was devastating. I think he took a piece of everyone in the family when he left. It was our families first taste of real hurt.”

A couple of days before Christmas of 2011 Osbourne’s father passed away and in the fall of 2012 another tragic blow struck his family when his brother Eric passed away at the age of 43, leaving behind six children.

“My mind was definitely blown away; a year earlier my father and now my brother Eric in the same month of our oldest brother Steve’s passing,” Osbourne said. “I went back to Campbell River for four and a half weeks and got to spend a lot of time with my family. It was the first time in probably 15 years that my brother Mat, and my sister Nerissa and I were all under one roof with no parents around. I brought my son with me and he had a great time with all of his cousins, aunts, uncles, grandparents. We spent days at the beach; days with his cousins at the river, and I did not want to come back to Ontario. I did because of my lady, my son, my company, a few friends etcetera, but B.C. was calling me.”

After some discussions the decision was made in April to move to British Columbia. “There are so many great opportunities for my family,” explained Osbourne. “I think it will help my lady and me out, and I know my son will have a great time growing up so close to so many cousins. I think that I will be able to help out with my nieces and nephews as well to be there for them if they need anything. Just to go fishing, light a fire at the beach or, maybe even go to the wrestling matches I think would be great. Our place is much bigger and is a house with a backyard so no more apartment style life; so a lot of good reasons to come back home.” 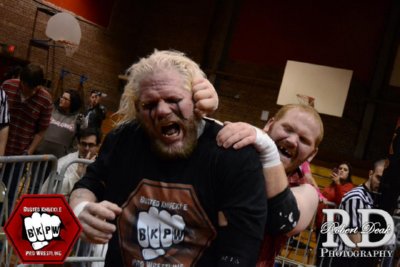 However, one of the unanswered questions is what will happen with the Kitchener, Ontario-based PWA, which Osbourne started with back in 2005. Osbourne acknowledges that the B.C. market is much different in comparison to Ontario as there seems to be only three main promotions (ASW/BWW/ECCW), while within a one hour drive of Kitchener, there are at least 10 different wrestling federations.

“The biggest questions I have been getting since I decided to move back west were, ‘Will PWA still be alive?’; ‘Will you be bringing it out west?’; and, ‘Are you going to wrestle for ASW/ECCW or BWW?'” explained Osbourne. “Now PWA will continue in Ontario, we already have our events set for the summer and are adding more, but I don’t know if it will see the light of day in B.C. I would love to get it going, but it will take a tremendous amount of work, to get the network that we have built in Ontario. I would definitely like to wrestle for the promotions out west and get kind of familiarized with their style of things out there. I still love wrestling and entertaining crowds so we will see if they are interested in using me and how everything else pans out.”

Looking back over his career, Osbourne felt that 2003 was the breakout year for him and some of that happened in B.C.

“I went back to South Dakota for NWA Rocky Mountain; it was also the year I wrestled for ECCW on Vancouver Island in British Columbia,” reminisced Osbourne.

“I was home visiting family and Michelle Starr, the then-owner of the promotion, gave me a few matches which I was very appreciative of. I was also starting to work a lot more events in Ontario. I won the OPW Northern lights Cruiserweight Title for OPW that year. In 2004 I went to Montreal, Quebec, for a few events, and also wrestled in New York State, while continuing to wrestle throughout Ontario. I wanted to get back to B.C. that year, but things were working out really well in Ontario for me. 2005 I continued to try and branch out and get more matches. My travels took me to B.C., Alberta, Quebec, New York, and Ohio. This was also the year that I decided to start promoting pro wrestling events. In 2006 I was nominated for the runner-up to Ontario Wrestler of the Year and had another great year in 2007.” 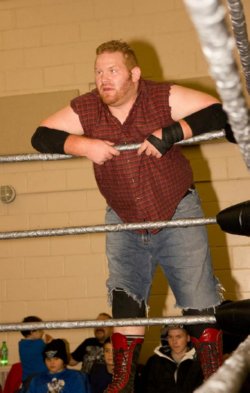 During his time wrestling in Ontario, Osbourne had the opportunity to get in the ring with some very interesting opponents. In 2010, Osbourne worked extensively against Super Kamikaze and felt what made their matches special was the fact that his opponent always wanted to raise the bar every single time they faced each other in the ring.

“I think we clicked and ended up wrestling so much because we enjoyed taking each other further all while trying to get the crowd louder and louder every match we had,” Osbourne elucidated.

“Super K really moves fast and I definitely was not the guy jumping off the top ropes. I would move, and or catch the masked man and slam him or suplex him or just kick him in the arm to slow him down. I think the highlight for me was watching him win the PWA Pure Wrestling Championship. His children got in the ring with him and it was quite the celebration.”

Later in 2011, Osbourne would step in the squared circle with Bushwacker Luke Williams on two occasions. “Bushwacker Luke is still wrestling every weekend and probably most weeks to this day,” said Osbourne. “I was honoured to get booked against Luke, and soon found out that he still gives everything he has in the match. I think what I learned the most in having the matches with Luke was not to judge a book by its cover. The man can still go, and boy what a fountain of knowledge.” 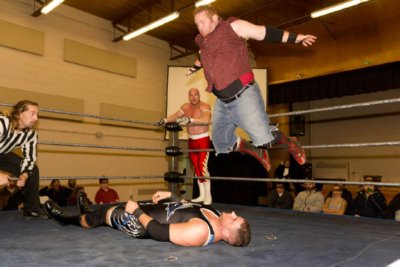 “I am going to try and come back for a MCW event to defend the titles, maybe even PWA tag belts, but other than that and maybe the HardKore Hick coming out west for an event I believe we are done as a tag team,” Osbourne said. “Maybe a new cousin will emerge or maybe Hick will go back to his other personality Chunky Fresh.”

On May 31st, Osbourne will be leaving Ontario to make the long trek out to B.C. and expects to make several stops along the way before arriving sometime around June 8th or 9th. However, before he leaves, on May 25th, Osbourne will be wrestling his farewell Ontario match against Elian Habanero. “Elian is the guy I had my first match with so it will be really great to get to close this chapter this way. I will be back when I can, but I look forward to seeing everyone at the Alpine Club, located at 464 Maple Ave in Kitchener for one last huge PWA event with yours truly on it.” 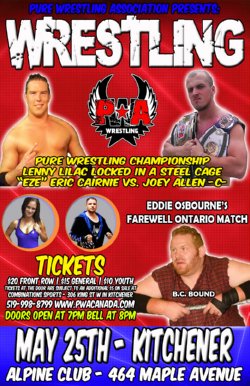 One person, who feels that Osbourne will be dearly missed, and will also be a great asset to the wrestling scene in B.C., is wrestler Ruffy Silverstein. “Eddie has been one of the most versatile and professional athletes I have been in the ring with. Eddie has always been up for any type of match between us, whether we are having a great match for the fans and at times we have both felt like beating the snot out of each other, he was always there; and always there for a beer after the show!”

With regards to what sort of impact the move to B.C. will have on his wrestling career, Osbourne feels it will challenge his hunger to continue to perform in the ring.

“I love wrestling. I go to sleep thinking about wrestling, or working on something for PWA and I wake up in the morning and it is the very first thing I am thinking about. I don’t want to give it up at all, but I know family is going to take a lot of my time, and that my schedule will slow down. That’s not to say I don’t want to join the guys who are travelling all over B.C./Alberta doing show after show, because I think that would be great. I just think I will need a good period of time to settle in and evaluate what I am going to do as it pertains to pro wrestling and life in general.”