Last stop: Boston for Smackdown, where the music died

BOSTON – After a great crowd on Monday in New Jersey, the crowd was back to normal on Tuesday night at the Smackdown taping in Boston. Dolph Ziggler, Wade Barrett and Fandango were back as heels. Triple H and John Cena were really over and both received a huge pop. And to cap it off, the TD Garden got a visit from Mr. McMahon.

A lot of questions were going to be answered with the Smackdown taping, especially how the crowd would react towards the new World champion Dolph Ziggler and Fandango, whose song put him really over the night before on Raw, in front of a raucous crowd at the Izod Center in East Rutherford, NJ. 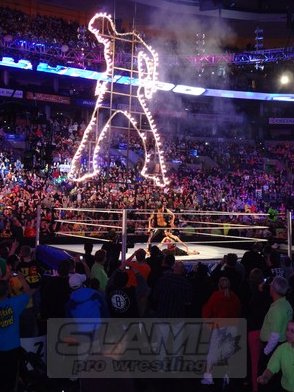 Fandango may not have wrestled at Smackdown on Tuesday night in Boston, but he did get an entrance. Photos by Pat Laprade

Well, we sure had answers and it was more like a reality check. Heels stayed heels, babyfaces stayed babyfaces, and the song never truly picked up in Boston.

It’s not because some people didn’t try. But the Boston crowd were composed of many children with their parents and just regular fans. Not too many hardcore fans and not many of the same Mania crowd from Monday. You really need to be a hardcore fan to travel from New Jersey to Boston in order to see a show.

But what surprised me the most is that the crowd didn’t seem to understand at all the concept of humming the song. Just like if they hadn’t watched Raw the night before. Thinking about it, that’s probably it. I had people around looking at me with a weird look as I was humming myself.

So after a few tries, the humming died and the crowd was back to its normal reaction. Fandango didn’t wrestle during Smackdown but was ringside with his girl to watch the main event, Ziggler defending the title against Chris Jericho. So every time the humming started building up steam, it was cut off by chants towards Ziggler, Jericho — or AJ for that matter. It was as if the crowd could not make its mind on one chant.

Even after the dark main event, that pitted Cena, Daniel Bryan and Kane against The Shield, Cena took the mike and started humming and dancing himself. Of course, that was the moment where the most people got into the humming, but since it was Boston, Cena would’ve asked them to do anything and he would’ve succeeded in his hometown. But then again, it never really picked up.

So Cena asked Fandango to come down to the ring. The latter did a heel promo, saying that Boston didn’t deserve him. Cena called him FanDouchebag and the three of them beat Fandango up. After the beating, he went back at his usual “Say my name properly” gimmick.

Is Fandango a bigger star now than before Mania? I’d say so. He was still involved in the main event of Smackdown. And there’s still a chance the humming will pick up. WWE tried as much as they could to make it work under the character’s current heel status. But the bottom line is that it wasn’t the same kind of crowd. Maybe if we give it time and if WWE don’t give up on him, that thing might end up working. But Boston on Tuesday night was just too soon. The after show was a completely different party as well from Monday night as no one was singing his song on the streets or in the parking lot.

Other than that, Triple H and John Cena were the most over guys there. Cena especially in Boston didn’t get close to a mixed reaction. He was 100% babyface.

Chris Jericho received a good pop too. And Alberto Del Rio used a new catchphrase, maybe influenced by Arnold Schwarzenegger, as he ended his promo saying: “Hasta la vista, baby!” It worked well with the crowd and should work pretty much everywhere as it is a well-known line.

Vince McMahon was also well received by the fans as he showed u,p pointing at his watch, pretty much like he did during Bob Backlund’s speech at the Hall of Fame. He came out during a segment with Triple H and Team Hell No. It was an interesting segment to say the least and I don’t how much of this will be on Smackdown or edited off, but it was certainly funny with what seems to be a lot of improv. 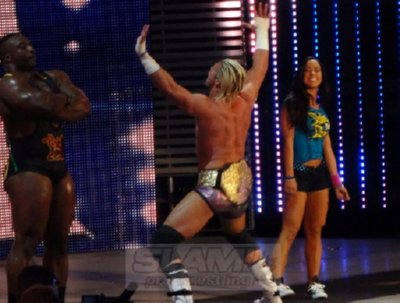 Dolph Ziggler wears his new World title in a unique way, to the approval of Big E Langston and AJ Lee.

All in all, it was a regular Smackdown show that could’ve been held at any other moment. It didn’t have the feel that Raw had the night before since it just wasn’t the same crowd. It was a kids crowd, a we-hate-the-heels crowd and mostly a John Cena crowd. The PG era might not be over yet.

Maybe the hopes were too high too soon for Fandango. Maybe we’ll just need to realize that the Raw after Mania will always be something special, but that sooner or later, things will just get back to normal.

It’s like going on a vacation. You have fun, you do stuff you never do usually. But when you get back home, you go back to your usual routine.

Well, Boston was home for the WWE as the Wrestlemania vacation comes to an end. 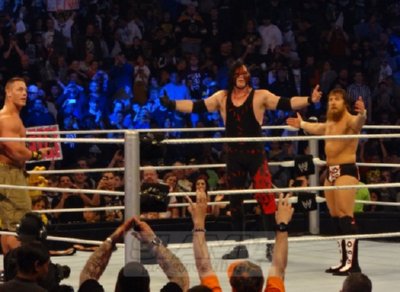 John Cena, Kane and Daniel Bryan in the dark match in Boston.