The passing of Bob Clark of Hamilton didn’t get much mention, if any, for which I deserve some of the blame. It’s been busy for me, personally and professionally, but I hope, with this column that he will forgive me from the next world.

You see, Bob was one of the first ones to let me see behind the curtain of professional wrestling. 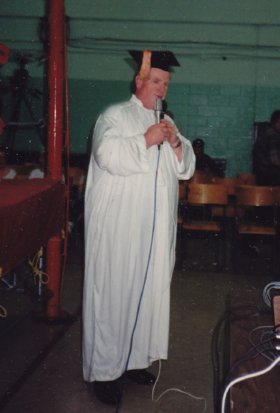 Bob Clark in 1990 at a show in Hamilton. Photo by Greg Oliver

In the later 1980s and early 1990s, he was a promoter in Hamilton, Ontario, running small shows here and there, using local talent like Big Mac and Alex Girard (who were co-promoters with him), Silent Brian Mackney, and Farmer Bill.

I was still doing my Canadian Wrestling Report, so I went to a few of the shows and have some photos from the cards. Armed with just a point and shoot, I didn’t get much more than photos of the wrestlers going to and from the ring, but they offer a little trip to the past for me.

The thing about those shows was that there would be regular fans, and Norm McEvoy was one. He was a classic (and no doubt still is). Norm wore these huge boots, and was a big steelworker with a mess of hair. His voice could PROJECT, to say the least. When he yelled at the wrestlers in a venue, like the gym at the Kiwanas Boys & Girls Club, they probably heard it down the street.

Bob Clark portrayed a Professor on these cards, and had long ago given up any idea of a wrestling career.

Over the years, I got to know him a little. He was particularly helpful with my first book, The Pro Wrestling Hall of Fame: The Canadians, hooking me up with some names that I did not know and suggesting others to research.

Later, when we were talking about the death of Terry Yorkston, who probably had more fame as WWF referee on the Maple Leaf Wrestling shows than he ever achieved as a wrestler, Bob talked a bit about his early days as a fan and breaking into the business.

“The Municipal Pool was every Tuesday night. It held about 600 people,” Clark recalled of the unique set-up in Hamilton, with the ring set up over the swimming pool. Tickets would go on sale at 9 a.m., and would be spoken for an hour later. “You could never get a seat at the Municipal Pool. It was always full.”

All the top entertainment came through Hamilton, as promoted by Frank Tunney out of Toronto.

“In the summer time, they moved from the Pool over to the park [baseball stadium] across the street,” reminisced Clark, launching into a memory of Tiger Tasker, whose career dated back to the 1930s. “Tasker drove in with his brand-new Cadillac, which was a mistake, because he was showing everybody about his car, showing off and everything. The fans got ahold of it, and ripped all the upholstery out of it, and made a heck of a mess out of it. He was crying the blues. But you don’t do those type of things, like tell people where your car was.”

Like most of Hamilton, it seems, Bob Clark tried professional wrestling.

“I hung around with a bunch of good ol’ guys back in them days. I was trained by a good bunch of guys,” he said. “I never really, really pursued it. I was always just a canvasback, just a jobber.”

But he never forgot those roots, and I could count on him to fill me in on some of the goings-on of lesser lights, like Ted Grizzly, Vincent Bright or Yorkston. He tried to meet with friends for coffee, and when Grizzly was ill, he legally fixed it so that Bob was one of the few allowed to see him. Many of the bonds were formed while refereeing for “The Bearman” Dave McKigney.

He knew some stories too, and when announcer Norm Kimber came up in the discussion, that led to a rant on Jack Tunney, the nephew of Frank Tunney, who took over the Toronto territory. “Jack made a lot of enemies in this area. He may have thought he did a lot of good, but I can never forgive him for what he did to a lot of the guys, especially Norm Kimber. That was the biggest shock of all, just walk in the office and say, ‘Hey, you’re gone.'”

Bob always seemed to have some health issues, and because of that, never got out to one of my Titans in Toronto events, to reconnect with old friends. A diabetic, his legs were a continuing frustration, and he didn’t get around very well.

It was our common friend, Big Mac (Mervyn McKie) who told me about Bob’s passing.

Apparently Bob went in for open heart surgery on February 23, 2013, and got through the operation okay, but they couldn’t re-start his heart, and so he passed at Hamilton General Hospital. He was survived by his wife, Louise, and kids, Kim, Robbie, Carol, Robert, Pat, Wendy, Peter, Marian and Bobby Roy.

During a 2009 chat, Bob Clark was particularly wistful. “I broke down the other day there, Christmas Eve. I was feeling down and out, remembering the old Sheik, Eddie. He was a great guy. He was a real character. A lot of people say you don’t have feelings, but you do. You think about these guys, the old days. So many of the guys are going now.”

And now you have gone too, Bob. Rest in peace, my friend. And say hi to your friends for us.