Holy Toledo, a WWE show through an 8-year-old’s eyes

WWE Smackdown brought their “Road to Wrestlemania” to Toledo, Ohio at the University of Toledo Savage Arena. I asked Dad if the arena was named after Randy Savage. He said it wasn’t. 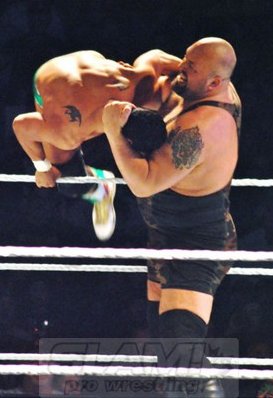 First the Great Khali came out with his new manager (??) Natalie Neidhart. They did a little dance in the middle of the ring. I didn’t like it. Then the Colons came out with their manager Rosa, who also did some dancing. I liked her dancing a lot better. Anyway, Khali won the match via pinfall. Even though it was two against one, the Colons couldn’t win.

Next, Yoshi Tatsu wrestled Michael McGillicutty. Tatsu won the match via a pinfall victory out of nowhere. I was surprised. Dad said it was the first time he ever saw Yoshi win a match.

The third match had Alicia Fox vs Layla. Layla did a brutal attack on Alicia and won by pinfall. It was way too short. I blinked and missed most of it.

Jack Swagger then came out with his manager, Zeb Colter. Colter must be a hundred years old. I guess you have to be that old to understand the Constitution of the United States. After a lot of talking on the microphone, Swagger pinned his opponent, Justin Gabriel.

After that came a really long intermission. I saw lots of kids coming back with T-shirts and other stuff. I wanted a green John Cena T-shirt but they didn’t have one in my size. Rats.

It was time for more matches and Big Show took on World Champion Alberto Del Rio with his valet Ricardo. This was a street fight, and it was a great match. It almost was a TLC match except they didn’t have any ladders. Alberto won the match via submission. Afterwards, Alberto walked around the crowd giving high fives. He gave me one, and I told him “great match!” He gave my Mom a wink, and she looked really happy.

Wade Barrett then came out to defend his I.C. title vs Bo Dallas. Bo tried real hard, and the people were cheering for him but Barrett won via pinfall. 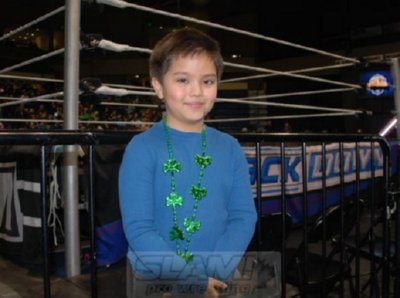 My favorite team, “Team Hell No” came out to the biggest reaction so far. They took on the Rhodes Scholars. After a lot of talking, and a really good match, Team Hell No won via submission. Kane and Daniel Bryan did their funny stuff afterwards where they teased they were going to split up. They wound up giving each other a big hug.

At last the main event; Randy Orton vs Mark Henry. Except for Alberto, I think Orton was the biggest star of the show. The people were going crazy for everything that these guys did. They took turns beating each other up. Orton won by disqualification which happened when Henry used a chair and the referee saw it. It was kinda weird. After that, Randy did a lot of posing on the top rope from all four corners, and then walked around the ring meeting as many fans as possible. He even signed a few autographs. But I didn’t get one. Oh well.

It was a great show, and I was really glad I went.