By KEVIN JEFFERIES – For SLAM! Wrestling

Every town has a George Labash, someone who is an intricate part of the local wrestling scene even if they never donned the tights, and when they pass, as he did on Friday, March 8, 2013, the wrestling community mourns its loss. Today, wrestler-turned referee Kevin Jefferies remembers Labash, who was a key figure in Vancouver for 30 years.

I first met George Labash at an All Star Wrestling show in Cloverdale BC, way back when Sandor Kovacs and Gene Kiniski were the promoters and I was getting my start in the business. Moose Morowski introduced George to me.

George was very shy and did not talk much, but he was always willing to do any favours and help out whenever needed. 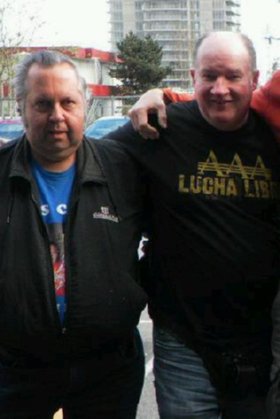 After getting to know George, he seemed to be an avid wrestling fan, but more importantly a good guy to have around.

Over the years, George would attend all the shows at the Pacific Gardens and in Cloverdale and became very close to several of the wrestlers, including Morowski, Dean Higuchi, Eric Froelich, Igor Volkoff, Roy McClarty, Don Leo Jonathan — and the list goes on.

When Al Tomko to over ownership of All Starr, George was still there helping out in any way possible. He would pick up wrestlers at the airport and bring them to the arenas. You name it and George would be there for you.

As Velvet McIntyre reminded me recently, we nicknamed him “Silent George” as he rarely said much.

When I was refereeing for the WWE, I would meet up with George at those shows too. He was always at the Vancouver shows and again helping with any and all.

He would be a runner for the agents for whatever needed be done, along with enjoyable stints as the timekeeper and bell ringer in the early days.

George became close friends again to several of the WWF/WWE stars. It was great to have him around, and he would even drive us to other cities in BC on his own to be there to help out.

One of his closest friends became The Honky Tonk Man and they always stayed in touch.

“Just lost a dear friend from Vancouver, George Labash,” Tweeted HTM after George’s death. “George was a regular behind the scenes for WWE doing little things the agents needed when WWE came to town. We will miss George.”

He had other great friendships with Michelle Starr, Verne Siebert, Vance Nevada, Gary Allen, and many, many more.

Very few of us have ever got to see the collection of wrestling memorabilia this man had. I was amazed at what he had collected over the years.

As a young man, he worked hard with his father, George Senior, for several years in George’s radiator business in New Westminster. When his Dad closed down the business, George did not stop, as he had his own car cleaning business and was very successful at it

But even when working hard in those businesses, George always had time for professional wrestling events in Vancouver and the interior. He would always take the time to go have coffee with the veterans of this business and they all enjoyed having George around.

I just spoke to George a week ago and all seemed good with him. Then I heard he had been hospitalized Thursday with a heart attack at the Royal Columbian Hospital, and I started spreading the word.

On Friday, we learned that British Columbia and especially All Star Wrestling, had lost a true fan and a very dear friend. He was just 53.

George Labash will never ever be forgotten.

On a sad note, it is ironic that George Labash was a great Stompin’ Tom Connors fan, who also died this week.

Kevin Jefferies has been involved in the wrestling scene in British Columbia for 30 years, including time as a wrestler, referee and promoter. For more about his career, see the SLAM! Wrestling profile on him from 2011: Kevin Jefferies still passionate about wrestling 30 years later.