Winnipeg’s Mentallo has traveled the world

Many might think that leading the life of a masked wrestling superhero would be simple; however when you factor in the pressures that come with having been a multi-time champion life isn’t so simple. It is a pressure that Mentallo has experienced a couple of times during his career particularly when he was Premier Championship Wrestling (PCW) champion in Winnipeg.

“When I became PCW Champion it was shortly after a mass exodus from the company,” Mentallo told SLAM! Wrestling. “A lot of wrestlers left the company to pursue their options with the upstart AWE. While in this process, a lot of fans were burnt due to some unprofessional actions of many of the wrestlers on their way out. With a dwindling, junior heavyweight based roster it was time to start re-building and re-branding the company. Guys like Kenny Omega, Rawskillz, Mike Angels, Chad Tatum and I changed the style of PCW from sluggish, storyline-driven wrestling, to a faster pace, Lucha-resu type style. It was up to us to re-build what was destroyed and it was up to me to make sure the championship regained its prestige.” 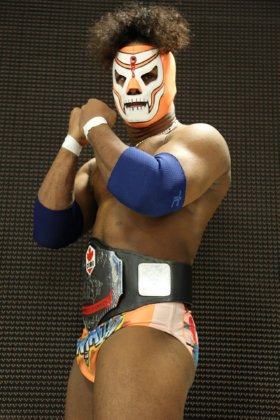 Due to a lack of qualified trainers, training facilities and outside opportunities, it was a gruelling uphill struggle, said Omega. “I guess that’s where the phrase ‘ya gotta make do with what ya got’ comes to mind and when a group of us 10 years ago wanted to learn (but didn’t know how), Mentallo found a way,” recalled Omega in an email. “He amassed an ungodly amount of tapes from all corners of the planet and invited us to study/enjoy pro wrestling as a basis for what we’d train the next time we had an evening in the ring. Mentallo acted as a teacher/father carefully choosing what matches to watch and ensuring that we were exposed to high quality wrestling. Fast forward to today; Mentallo is still committed to the development of new talent while still being a top talent himself.”

For Mentallo, the pressure of being the champion would return when he was Canadian Wrestling’s Elite (CWE) Champion. Prior to his becoming CWE Champion, Mentallo was working with a lot of the imports who came into CWE like Bryan Danielson, Justin Credible, Tyler Black, and others; so he felt he was already the un-crowned champion at that point due to the company relying on him to produce good matches with the aforementioned.

“Adding the belt didn’t add any more pressure, since the pressure of the company succeeding or failing was greater,” recalled Mentallo. “During my run towards the championship, myself, Danny Duggan and AJ Sanchez were embroiled in a three-way feud. It was a very interesting dynamic as AJ was heel, Danny was face and I was a tweener. It produced some very good matches. The best thing about it was that it was a credible main event that didn’t require any big-name talent to draw interest and attention. At that time the fans were very divided in their loyalty. It pretty much transcended typical good guy / bad guy stereotypes and was more based around personalities.”

Sanchez remembers quite vividly how when he and Danny Warren were getting CWE up and running, landing Mentallo for their roster instantly gave them credibility in the marketplace. “For me personally, he was the measuring stick,” said Sanchez. “With him coming in and being the number one guy and then the decision to put myself alongside him in main events, I knew I had to try and make sure I could hang with a guy like Mentallo. Extremely intelligent, personable and not afraid to be real and give constructive criticism either; he helped me a ton and gave me some great advice prior to my trip down to Mexico as well.” 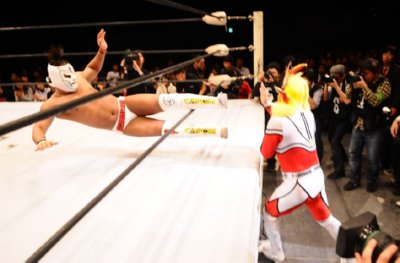 Mentallo goes with a baseball slide against Jushin Liger.

During the early stages of his run as CWE Champion, Mentallo found it was crucial to make sure that every main event he was featured in was the best it could possibly be in order to help CWE establish itself and garner a level of credibility and respectability on a national level.

“If we were able to draw 300 people to a show, you only have one opportunity to impress them. On the first ever CWE show I wrestled Bryan Danielson,” Mentallo said. “If we didn’t go out there and put on a stellar performance that could have been the very first and last CWE show. In every match for the first two years it was very crucial to give the fans their money’s worth.”

To CWE owner Danny Warren, Mentallo has been the cornerstone that the foundation of the company was built on. “In our first year of operations he continually delivered show-stealing performances in the main event against the very best imports brought in from ROH, TNA, and formerly of WWE,” Warren said. “Without Mentallo at the helm CWE would never have got off the ground and where it is today.”

The initial foray for the 5-foot-8, 195-pound Kevin Ali into the world of professional wrestling came about due to disagreements with his high school basketball coach when it became apparent that the majority of the playing time was given out based on favouritism and not skill. During his final year of high school basketball Ali found himself warming the bench. “It was very frustrating as the year prior I was a starter,” recalled Mentallo. “After many meetings with the coach to try and resolve the situation, I decided that ‘bench warming’ was not for me and quit the team. At that point I needed another sport to get involved with. I was leaning towards kickboxing, but while walking through the mall I noticed a poster for professional wrestling with contact information at the bottom. I called the number, went and saw the show on a Wednesday, and then ended up training the following Sunday.” 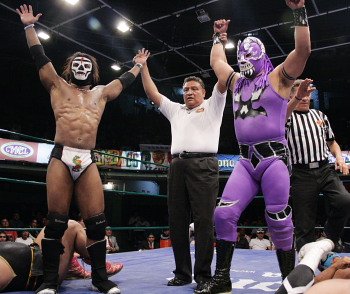 Mentallo and Ephesto in Mentallo’s CMLL debut in Arena Coliseo.

Mentallo’s original trainer was Vance Nevada, who would train him every Sunday for six months back in 1997. “I would eventually go in on my own time to work on certain aspects, whether it be conditioning or techniques,” said Mentallo. “Later on in my career I went on to train in Mexico under Hijo del Gladiador and Satanico. Gladiador taught me Lucha Libre basics and Satanico taught me how to wrestle aggressively, much like the Rudos do in Mexico.”

During the early years of his career, he wrestled under the names of King, Flying Panther Ali, Black Magic and Hysteria. However, many of those characters were assigned to him and Mentallo felt he made the mistake of purchasing replica masks instead of trying to do something original. “With the Mentallo character, I feel like it is more of a representation of who I am behind the mask and not something or someone a booker wants me to be,” expressed Mentallo, now 33 years old. “I’ve invested so much into the character that I don’t forsee any changes in the future. I’m very comfortable with Mentallo as it truly is an extension of my personality.”

For the majority of his career Mentallo has wrestled under a mask and could only recall a handful of times early in his career when he didn’t. When he first donned the mask, he found his vision and breathing were the biggest issues. “Through the years however, I’ve tweaked my mask to be as comfortable as possible,” said Mentallo. “Majority of my masks are made in the home of the mask, Mexico, and they have my measurements down to a tee. One maskmaker in Japan would borrow a mask of mine to use as a template, bring me a new mask, and then take it back to make any corrections necessary.”

A match that Mentallo credits with having a huge impact on him was against Christopher Daniels. “I learned first-hand on how to set up key moves by targeting specific areas,” felt Mentallo. “Aside from that my favourite opponents have probably been Tajiri, Jushin Liger and Kenny Omega, all of which I had the pleasure of facing in Japan. Through my teenage years to early adulthood I spent a lot of time watching and studying Tajiri and Liger. It was very much a ‘dream come true’ of mine to wrestle against both men. Kenny Omega is a good friend of mine, but is always on the cutting edge of professional wrestling. With Kenny, you are always in for a physical and mental challenge.” 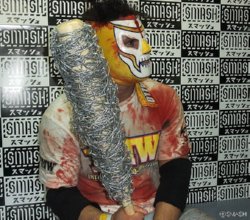 Mentallo can be hardcore when needed, like working for Smash Wrestling in Japan.

Throughout his career Mentallo has taken part in various types of specialty matches — ladders, lumberjacks, Lucha rules, and others. Yet, the match that really helped establish him in Japan was a Three-way Scramble Barbed Wire Bat Match. “In no way do I consider myself a ‘Hardcore Death Match Wrestler’,” Mentallo stated. “So I was very concerned about getting in the ring with Masato Tanaka (ECW / FMW) and Akira Shoji (PRIDE Fighting). I was very fortunate to only come out with a couple deep lacerations considering the damage a barbed wire bat can do.”

Currently Mentallo is the CNWA Provincial Champion. Due to the fact that the CNWA is a new company and governing body, that he feels has an ideal concept that’s difficult to execute, he hasn’t felt the same pressures as champion that he felt when he held titles in CWE and PCW.

“When I won the CWE or PCW title, a lot more responsibility came along with it,” said Mentallo. “CNWA hasn’t reached its full maturity yet, so I think in these early stages it’s really tough to judge the weight of the Provincial Title. Hopefully my credentials can add some prestige and notoriety to the belt for future challengers.”

He’ll be on the PCW 11th anniversary show on March 16,at Winnipeg’s Doubles Fun Club as well.

Mentallo also continues to wrestle for CWE, which acquired a national TV deal in November 2012 (reported here by SLAM Wrestling). Mentallo knowing how repetition can become very boring has tried to incorporate fresh ideas and concepts into his matches without sacrificing their integrity.

“I believe that if you can do something nice or fancy without hurting the integrity of the match, you better do it,” said Mentallo. “Being original is extremely important in front of a live audience, which means it’s even more important on a weekly TV program. My goal is to have a character that is different to the other wrestlers in and out of the ring. Hopefully there are qualities about me that fans can relate to.”

Having wrestled in Canada, the United States, Japan, and Mexico, and in 2005 and 2006 participated in the WLW, WWE, and Pro Wrestling NOAH camps, Mentallo has set his future goals on continuing to travel and wrestle in as many new and old places as possible.

“Also, I’d like to groom my trainee Tyler Colton for wrestling on a grander scale,” he revealed. “In previous years training younger wrestlers is something I was primarily involved in, however I no longer participate in that area. As far as ‘bucket lists’ for wrestling goes, I would like to be able to add Super Crazy and Ricky Marvin to that list.”