TORONTO – The road to WrestleMania made its way into Toronto on Friday evening, and headed straight to the front doors of the Ricoh Coliseum. And a record-setting crowd walked that road, filling the building to see their favourite superstars put on one heck of a good show.

Featuring two of WWE’s biggest heroes, the main event had the announced crowd of 10,279 – announced as the building’s new attendance record – chanting and cheering from bell to bell, as John Cena and Ryback faced the members of the Shield in a 2-on-3 handicap match. 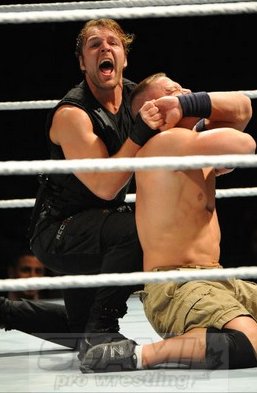 Ryback and Cena entered separately, possibly to see which one got the biggest reaction from the crowd. While Ryback’s reaction seemed to be universally positive, it’s arguable that Cena’s mixture of cheers and boos was the louder of the two. After joining one another in the ring, they then searched the stands to see from where in the crowd the Shield would make their entrance and the contest would begin. After an initial burst by Cena and Ryback (Cyback? Ryna?), the Shield’s numbers advantage finally caught up to them. The balance of the match saw the Shield members quickly tagging in and out to ground their stronger opponents. To cheer on their heroes, fans would alternate between “Feed me more!” chants and the ever-popular “Let’s go, Cena! Cena sucks!” Eventually, the Shield proved to have a hole or two, as the big men were able to finally capitalize on some mistakes by Rollins, Reigns and Ambrose and turn things around. But as Ryback was trying to Shell Shock one of the Shield trio, another one of them hit Ryback in the ribs, getting his team disqualified. While the in-ring action of this match was solid, but certainly not spectacular by any means, that fact, or the weak finish to the match didn’t seem to dampen the enthusiasm of the fans. Indeed, they continued to cheer on Cena and Ryback long after the final bell rang, including after the duo got their payback by hitting their respective finishing moves on two of the Shield, and as they made their way back up the ramp, after which the show ended.

1) Brodus Clay and Tensai vs 3MB (Heath Slater and Drew McIntyre w/ Jinder Mahal). This was a decent match to kick off the night, as it featured the right amount of action, comedy (like the 3MB gyrational antics).and overall fun. But while Drew impressed with a side suplex on Brodus during the match, it would prove to be for naught. The behemoths won the match after a double splash on Slater.

Up next was a brief Shield video vignette on the big screen, in which they promise to solve the “John Cena problem” tonight in Toronto.

Then, WWE announcer Justin Roberts told WWE fans to tweet their preferred stipulation for the upcoming US Title match between Antonio Cesara and The Miz. The options were: Two out of Three Falls or No DQ.

2) JTG vs Justin Gabriel. Gabriel impressed with his multiple-angle aerial moves during the match, ultimately hitting his 450 splash to get the win. After the match, the Shield came out and destroyed Gabriel and badmouthed Toronto.

3) Bray Wyatt vs Alex Riley. Wyatt is a great cult leader / Max Cady character. Riley is, well, Riley from before. The match was relatively short and saw Wyatt get the win.

Up next was a pre-taped generic Antonio Cesaro promo on the big screen during which he bad-mouthed The Miz.

Vickie Guerrero was introduced as the guest announcer for the next match.

4) Tamina Snuka vs Layla. Vickie tried to interfere on Tamina’s behalf, but Layla turned things around and Vickie got knocked down off the apron. This turn of events surprised Tamina, and she walked into a high head kick by Layla and got pinned.

5) Antonio Cesaro vs The Miz. It was revealed that the Fans picked a No DQ Match for the US Championship.The match started off hot and quickly spilled to the floor where they brawled for a while. Cesaro introduced a Singapore cane. He had some success with that, but Miz soon turned the tables – literally, as he got one from under the ring to a huge response from the crowd. A neat sequence saw Cesaro use a stray Singapore cane to bash his way out of a Figure Four Leg Lock. They continued to tease someone going through a table and exchanged several near falls. In the end, Cesaro used the ref as a human shield when Miz tried to run him through a table propped up in the corner. Cesaro then eye-poked Miz around the ref’s’back and hit the Neutralizer for the pin. After the match, Cesaro tried to attack Miz again, but Miz bull-rushed him through the propped up table.

5) Zack Ryder vs Michael McGillicutty. Ryder won with the Ruff Ryder after a short and simple match.

6) CM Punk vs Kofi Kingston. Punk dropped a pipe bomb on the Toronto fans before the match. This was a very good match with both guys showing off their arsenal leading to lots of close falls. After a series of moves and counters, Punk finally hit the GTS for the pin. In terms of in-ring quality, this was the match of the night, as both men really gave it their all from bell to bell.

“I’m extremely tired while writing this,” wrote Bob Kapur to his editor. See any mistakes? The other mistake is Bob heading off to London, Ontario for the Hardcore Roadtrip today, perhaps. A few guys have bailed already. Watch for that report here in the coming days — once Bob has had a nap?