What happened on January 11, 1993? The first episode of Monday Night Raw aired from the Manhattan Center. Since that inaugural episode, 1,023 episodes of Raw have followed with 87 different WWE Champion title reigns alone. What started as a one-hour show has transformed into a three-hour weekly extravaganza including a tumultuous five-plus year battle with WCW over who would dominate the world of professional wrestling.

For many of us, the debut of Monday Night Raw was really the beginning of a lifelong relationship with professional wrestling. Although Kofi Kingston was a fan of wrestling before Raw first aired, it certainly helped to strengthen his adoration of the business.

What was Kofi doing back then? He was in middle school. It may have been 20 years ago, but Kingston remembers being very excited to hear the news of this new wrestling program on television. 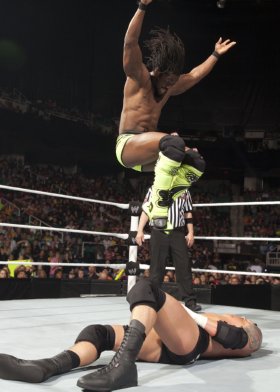 “I used to watch Saturday morning shows all the time,” Kingston told SLAM! Wrestling. “I was never able to afford pay-per-views so I was really happy that there was going to be a whole other night of wrestling shows.”

But just because the WWE had a new show, it didn’t mean Kingston could simply tune in for it.

“I had to fight my parents to stay up late to watch it,” he admitted. “They always wanted me to go to sleep early. I rebelled, I stayed up and I got a TV in my room to watch Raw. It was great.”

Growing up watching Raw, Kingston saw his share of past champions. But since he has already held the WWE tag team titles as well as the Intercontinental and U.S. titles, which champions of the past 20 years would Kingston like to face in a dream match?

While he wouldn’t specify which of his three tag team champion partners he’d like to have in his corner, Kingston had no shortage of words when it came to potential opponents he’d love to face. The top team on his list might surprise you: Road Warriors, or as they were known on Raw, The Legion of Doom.

“They had so much hype,” Kingston said. “Every time they came into the ring you just knew someone was going to get beat up. You knew they were going to dominate somebody. They came out with the spiked shoulder pads. I just thought they were so cool to watch. To go up against them would be great. I know they liked to beat people up so maybe it wouldn’t be so much fun, but it definitely would be a dream for me.”

When it comes to prestigious singles titles, not many compare to the Intercontinental title. While marquee wrestlers such as Hulk Hogan and John Cena never claimed the IC belt, you know it’s certainly a special honor when you do win this title. For Kingston, his dream match opponent shouldn’t surprise too many people: Shawn Michaels.

“In my mind, he’s one of the greatest of all time if not THE greatest,” Kingston said. “I just think he and I would have a great match. It would be an honor and a pleasure and certainly a dream come true.”

With the athleticism of both Kingston and HBK, is there a special type of match he’d like to have with the Hall of Famer?

“If it was one-on-one for one minute or for a half hour, it really doesn’t matter to me,” he said. “If I was able to get in the ring with Shawn and go toe-to-toe with the greatest of all-time, I’d be happy. It wouldn’t even matter what the stipulation was. Any ring time with him would be top-notch and awesome.”

While Kingston still has a long way to go before he can duplicate the accolades of the Heartbreak Kid, in just a few weeks he has the chance to knock one of those distinctions off his list: win the 2013 Royal Rumble.